King of Fighters All-Star How to Get through Epic Quests

The King of Fighters All-Star is a role-playing game released by Netmarble Games for the players. This game is significant because the players can arrange their teams when they battle through several annual tournaments. As this game features exciting attributes, the player can control one character and engage with several enemies. This will happen till you reach the boss of the stage. 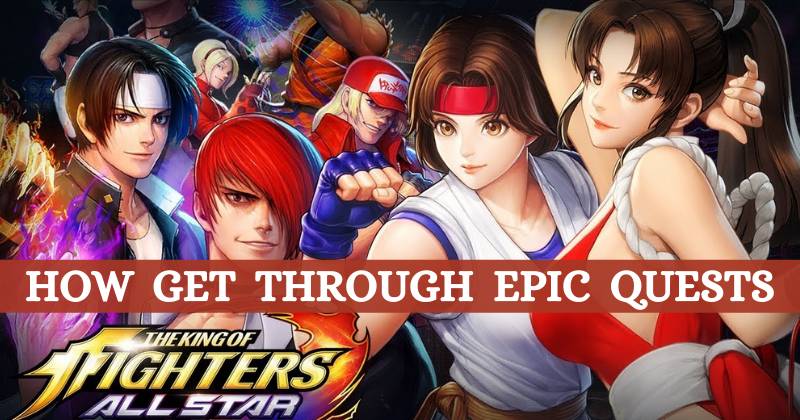 From time to time, the game has presented several new features to the players. There were character introductions and enhancements along with events. The Epic Quest is such an event inside the game. It can interpret as a game inside a game. There is a unique statistical system that you have to create with characters. You can find four of seven deadly sins for chapter 0 at the beginning of the game.

The names of them are Envy Mary and Greed Rugal. Apart from that, you can see Mecha Goenitz and Wrath Chizuru, and in the first chapter, you will find Ordeal Saisyu and False Conspiracy. Even False Advent Orochi will be there. When you are using them from now, you need to maintain the low-level quests. From that, you have to collect points till you become strong to clear the boss.

For every few minutes, the boss will appear. But, you will notice a change in the form. That will happen when becoming more muscular. When you become more robust, you can collect all the cash and many other capsules. You have other rewards also. Now, it is time to download King of Fighters All-Star on PC and let us find how to complete the Epic Quests of King of Fighters All-Star successfully. 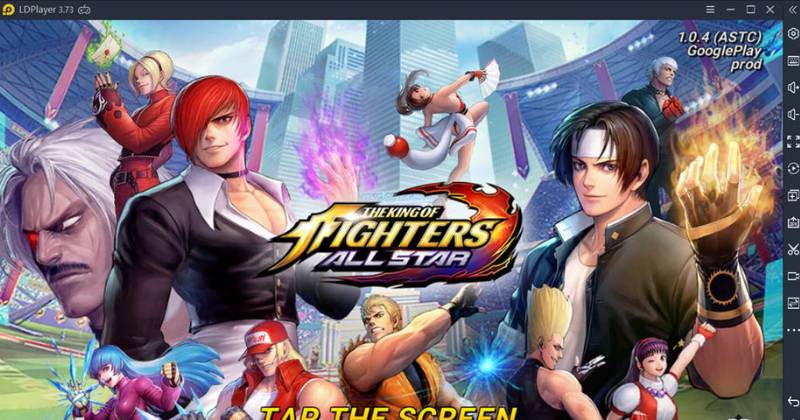 You can see two main types of levels in the game. The episode level or the stat level will divide into three. Namely, they are Attack, Defense, and Hitpoints. Each can go until 99. The second one is chapter level or strat level. It will reach the pinnacle at 20. The enhancement of abilities will work only for the Epic Quests. There will be no influence on them for the characters in the main game.

You will see daily quests in every chapter. When you do these regularly, you can get a bigger bonus. You cannot complete an Epic Quests in one day. Once player has finished up with the bosses, you can do the daily. Every daily quest is good preparation for the final.

You need level 60 Blue character for all the cores as the pre-condition for this chapter. You have to beat crazy Mary Boss. Do this before the end of the first chapter. To defeat the boss, you need level 60 with blue elements. This should possess with all the cores of Blue Mary. But it is not compulsory. It will work if you have Kyo or Terry 96 in the 80th level through the manual skills and time.

To protect yourself from most of the attacks, you can stand at the top. If it is hard to do, you can keep the grind. You have to do this at earlier stages to keep your stats and chapter stats. Then, you need to farm crazy, Mary. Continue this till the epi levels reach three. If not, you can go for anything which serves an auto survive to you. You can get Envy Mary- Silver grade if you attack the boss well and past. 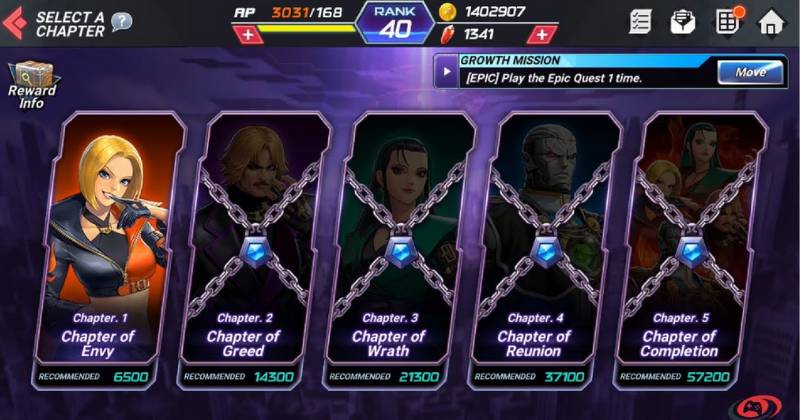 This is not bad, but panthers of Rugal can kill you by a single shot. Rugal is weak. It is an issue of brute force, and there is nothing other than that. Rugal is waiting to show his actual powers at the end episode. He has a Time Trial as the final form with two rectangles of attacks. There will be lanes of attacks with rolling flames. He will hit everything.

You can take some grinding by beating Chizuru. There will be a problem passing the sixth chapter when you are in the team with Orochi Lori 88, Goenitiz 87, and Kyo 87. Bleeding is his weakness. Maximum will come from Kula card set with Kyo 90, Terry 70, and King 66. Finally, there will be Chara level 5 and epic buff 9. Bleeding is the weakness of Chizuru. Having Mature 96 will be a benefit to you.

To destroy Chizuru, you need to maximize Andy and Mature. It will be time-worthy as you have to beat him daily. 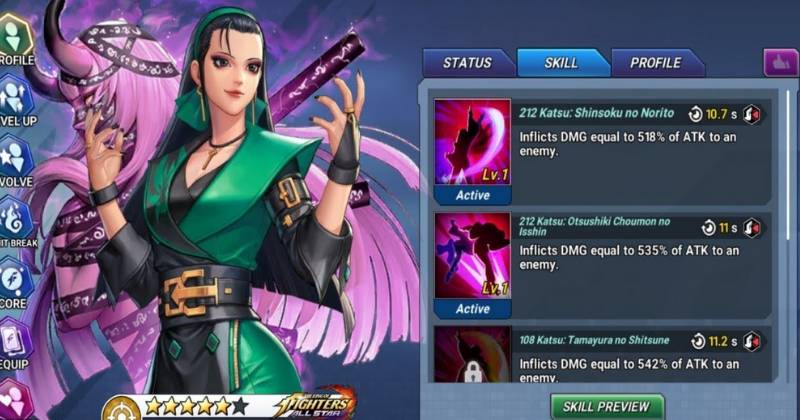 Shingo will arrive again as more potent than Kyo in the upcoming chapter. Take best greens and jin classic. Although it is ridiculous, you can take classic jin to 80th level to attack him. Then Shingo becomes a super armor.

Kyo comes as a hard one, and Jin classic will stun with Kyo. That will happen with electricity and glide.

Iori Yagami 98 will be there. You can obtain an intense yellow.

Chizuru will become more annoying here. This is the ideal place and the phase for a bleeding damage. Repressed Demon of Fury Chizuru will have unique skills to attack the boss with the bleed. There are some pre-conditions for this as follows,

Andy and Mature will bleed, and it will be worth it to have Samurai Shadows character. You will have some choice of cards that have bleed skills and buffs. You have to repeat rolling between claws and tornados with her super attacks. 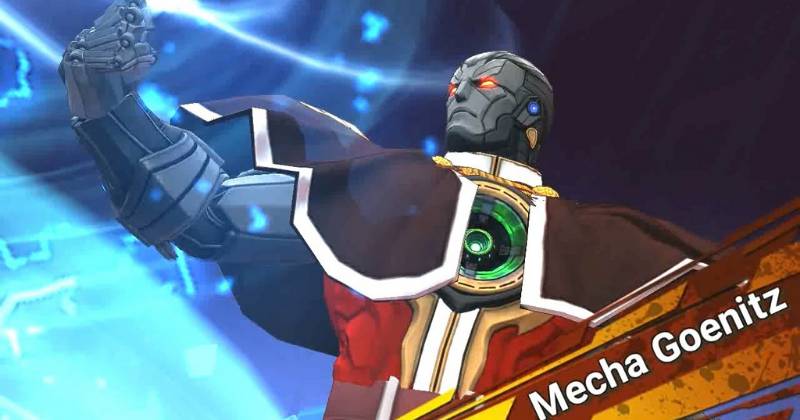 This is important as you can get some characters again. The way to get through this is super brute high-level force. They are as follows,

He will roll behind the special attacks when he was in the standard size. He is vulnerable to critical hits. You have to balance such types of fighters. It will become dark when he gets ready for the super attack. You have to call your striker to stun him. If not, tag the shockwave.

The recommended low quests are Kim 96 with 5-1 and Kim 98 for 5-2. If not, 5-4. The last one is Andy 95 for 5-3. As the recovery striker, you can use joe 96 and Benimaru 96 with 5-1 or 5-3. Once you beat all the bosses, you have to complete quests. It will offer more rewards like tickets, and you can use that to unlock the last chapter. It will help to collect the characters. You can complete more quests, and it will unlock with the completion. 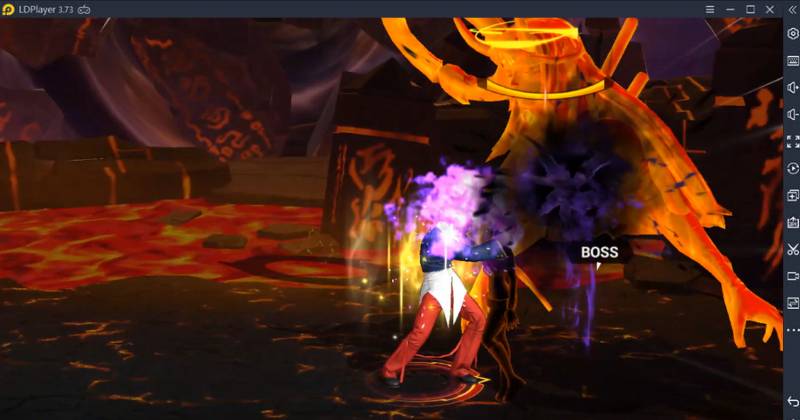 This is the return of bosses for a mega showdown. You will meet Envy Mary here, and her laser beams have reduced due to your attack. It will show you, but the glitch will support you. Now, you can get the wealthiest blue without any requirements. You can go for attacks with strikers. To do that, you need to have Rugal, Vanessa, and H. Shermine with you. 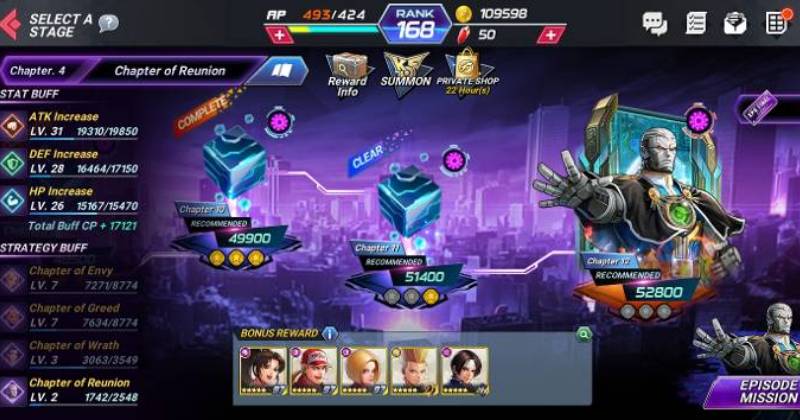 He will behave like earlier with his new super attack. He will call for in a pillar of fire attacks. He can make two rectangles of attacks and lanes of attacks with rolling flames. After that, he will charge with a giant laser with a high damage counter. It will allow you to hit back. There will be a repetition of this process. It will happen till Albeit accompanies minions to get in your path. 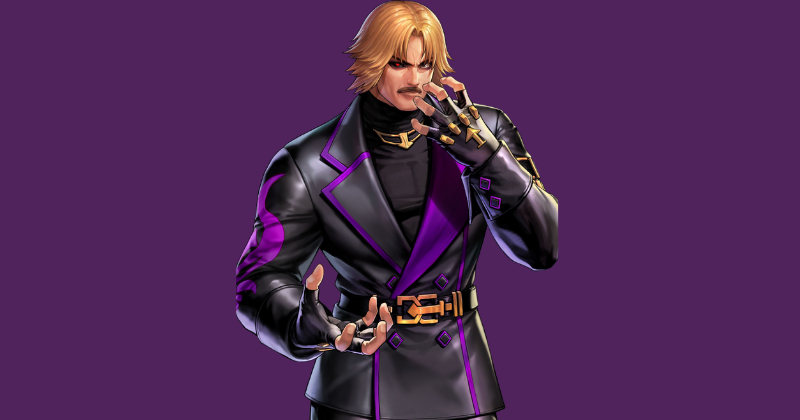 He will be vital as same as the previous episode. You will find no special features on him. 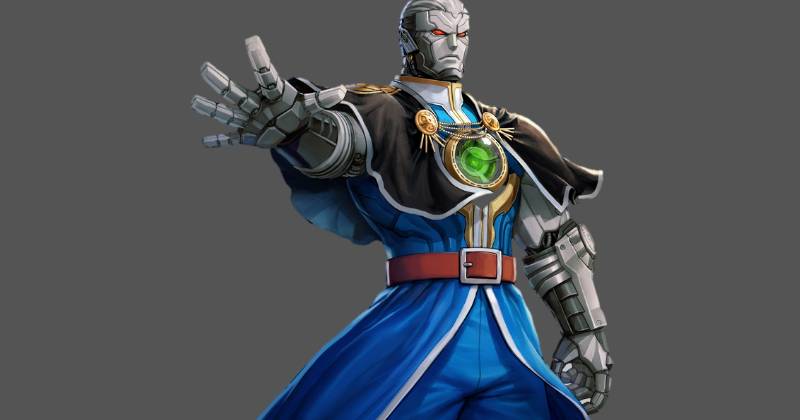 There will be episode opponents who will move to the rage mode. It will happen when they have low health conditions. Even a storm with any attack can demolish you. The primary way is saving the powers of the three characters and unleashing them. It will heal the striker. After that, you have to attack the specials while running. During that time, some characters will lose the rage with time.

He will be the most challenging boss among all the bosses. For this, you will need strict characters like Andy 97 with leadership skills and Swimsuit Mai with unique burn immunity. Apart from that, you want any character with burn reduction and healing strikers. Halloween Yashiro or Takuma 96 will act as strikers there. Saisyu will attack you with the emergency evasion, and it will begin the burning from the best occasion.

You can obtain a counter hit if you hit Saisyu before the burn. During the burning, you can try to use the super armor. He will call minions after few attacks, and they are also annoying creatures. They will start to jump here and there and throw fireballs. The situation will become more critical with that. If you cannot defeat all the minions, they will go away but build the rage bar of Saisyu. When it is fully completed, he can attack you again more powerfully.

You will see a glitch waiting for the minions. It will help them to float and summon stunning strikers, and they will freeze with this. So, you have to aim at Saisyu. The situation will become okay with the healing strikers. 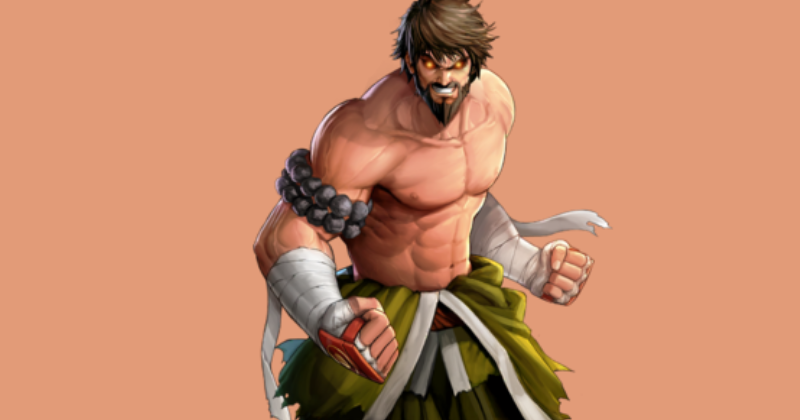 Saisyu will turn more simple, and you can reach him in April. But Yashiro will hit you with solid attacks. You will roll behind or use the super armor to break through. As he is passive, you can hit him with any character. But he flashes colors to you. If you touch him after that, there will be a reverse of damages. He will get up with the super armor after your knocks. So, attempt to cancel his super move.

There is a gauge above his head like earlier. But you can reduce it with some attacks. Do not let it reach complete because it will return a super attack to you. You will see a time above his head with the 13th bar. Then you need to attack him with a superpower or ask minions to attack from the sky. If you have only six bars remaining, there will be a range that can save all the supers from knocking him. If he attacks you, see the timer and tag the button to doze him.

The ultimate Character guide of King of Fighters All-Star can be viewed from here. 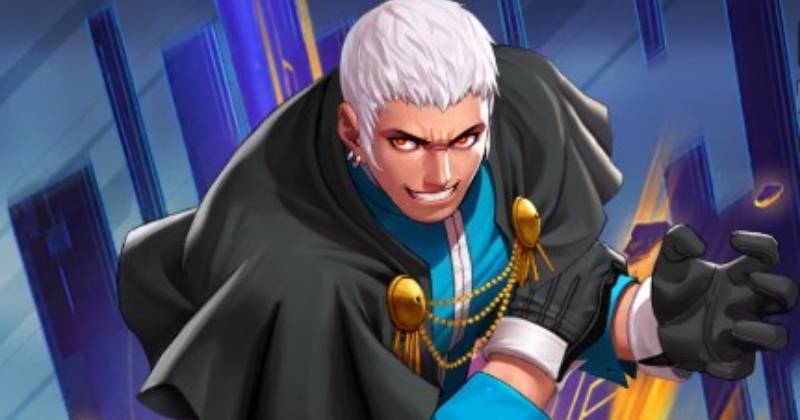 Here you have to attack Rakshana two times. Then you can obtain sacred treasure cards. There will be three such cards for you. When you continue to do it daily, you can maximize it and get other stuff also. The main weakness of False Advent Orochi is the super armor.

Finally, you can brute force. Remember the grind as it is your key. Do not forget the daily quests and other quests. In the final chapter, there are no visible specialties of the attacks. If you are being able to own an excellent buff level, you are safe. 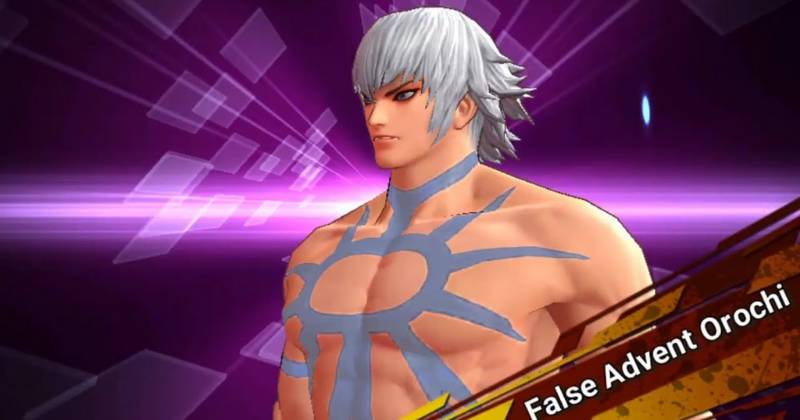 Use the Multi-Instance Sync Feature of LDPlayer to summon the top-tier heroes for the epic quests. You will have many rerolls at the same time, and your most wanted hero will be yours within seconds. 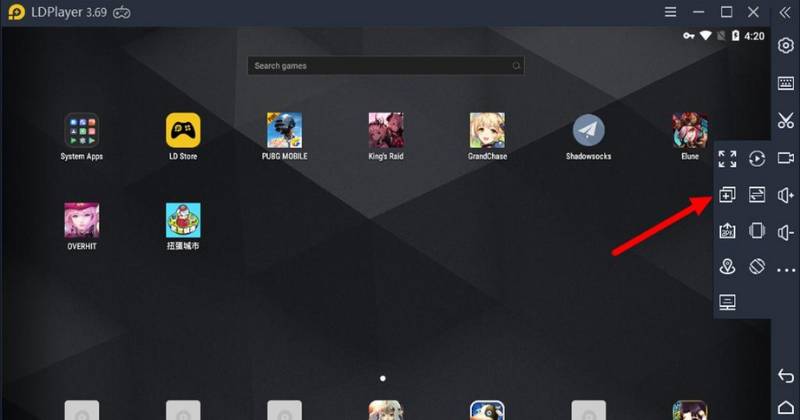 King of Fighters All-Star is a game with several unique attributes. Epic Quests is one such special feature in the game. It can introduce as a game inside another game. So, we discussed how to go through the Epic Quests in King of Fighters All-Star. You will see the same boss appearing in each level with changes in the form. So, get a clear idea about the game through this and play the level successfully. The King of Fighters ALLSTAR

Common Issues More guides for The King of Fighters ALLSTAR

King of Fighters All Star Top Tricks for a Quick Victory