Evony: The King's Return is the new puzzler game that comes to your doorstep with an MMO strategy mixed with real-time scenarios. This will be about a civilization empire where we need to build up an army, command our troops and create a civilization in the game. And finally, you will be the kind for this built up empire. And now, you have to save puzzles, construct and upgrade new buildings every day with Evony: The King's Return and here are the best tips for you to get practice as a beginner. 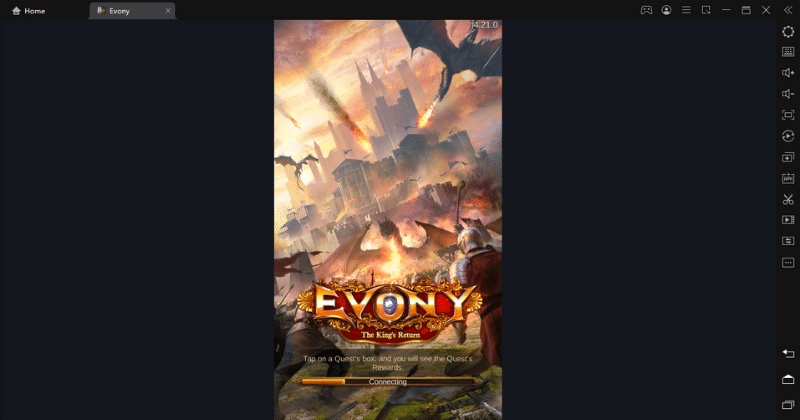 There will be seven civilizations handled in this Evony: The King's Return, and we can choose one of them as our architecture for the empire. Even if you like Japan, Korean, Russian, Arabian, Chinese, American or European, choose one and make your empire one of the best civilizations rich with great architecture. The game continuously requires us to do research, have upgrades, build a kingdom and expand it so that we would be the most powerful army of all Evony.

We can recruit the most popular leaders and generals like Julius Caesar, Charles the Great, Genghis Khan and many other historical characters to lead our force. Throughout the whole time of Evony: The King's Return, we need assurance that our army is capable enough to defeat the enemies and defend this homeland. If it seems so complex and challenging to you, here is a guide. This is Evony: The King's Return tips and tricks will be helpful for all beginners. 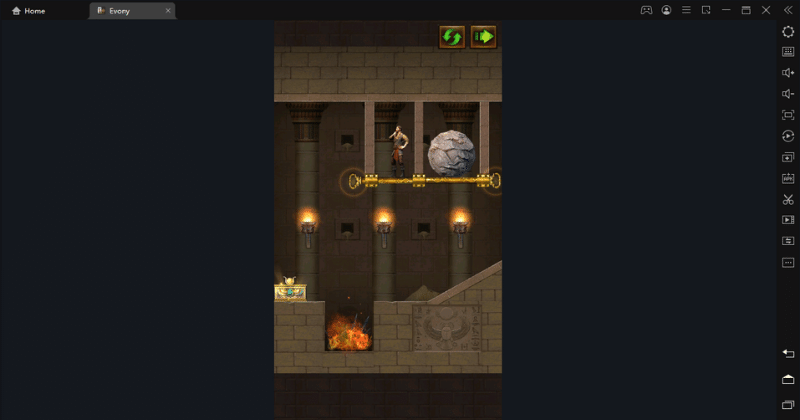 As we said earlier, Evony: The King's Return is an MMO game, and players have to go through so many constructional development stages to become the most successful player here. Your primary objective is to develop your base into the most powerful, and then you have to unlock some upgrades. After that, you will be asked to raise an army of your own and take other lands. Other players from the game will become an enemy or an ally for you.

We can upgrade our troops by having resources from the game, and resources can be earned by attacking other players. There is a multiplayer system associated with this game, and we can make the best use of it to build up a powerful team. So it will be a helpful factor for us to expand our kingdom. Once we build up a decent empire, we will not be given any more shields. So we have to defend our land on our own. 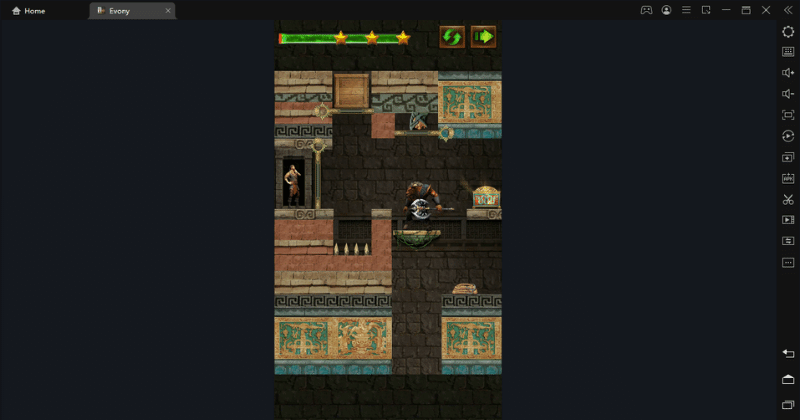 We have to build a castle and then upgrade it, as we said earlier. So we can go through the ancient ruins as they are helping us to seek treasure. Going through ancient ruins is challenging as it becomes complex from one puzzle to another. We cannot let our empire fall into a weak status because it will be exposed to vulnerabilities. So we can have gems, stones, food and gold to make it more powerful.

In Evony: The King's Return, there are numerous buildings available throughout the game, and they can help us improve the empire. And those are the places that make us build powerful troops and have some speediest resources. Every building you see in Evony: The King's Return needs resources, and they will also be upgraded with the resources. When a building gets to a higher level, it becomes more powerful and eventually generates more resources. 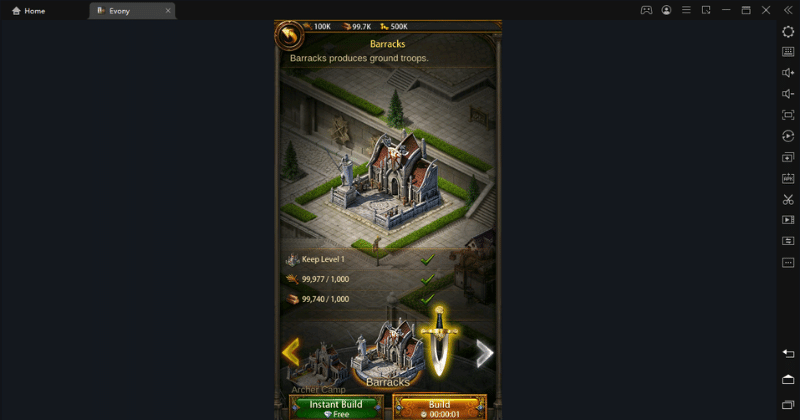 So here are the available buildings in Evony: The King's Return.

Earn Resources as Much as You Can

You need to farm and collect resources in Evony: The King's Return because they can help us to train our troops and upgrade buildings. The primary resources from the game can be identified as Iron, Stone and Wood. You can collect and farm them at the Quarry, Farm, Mine, and Sawmill. 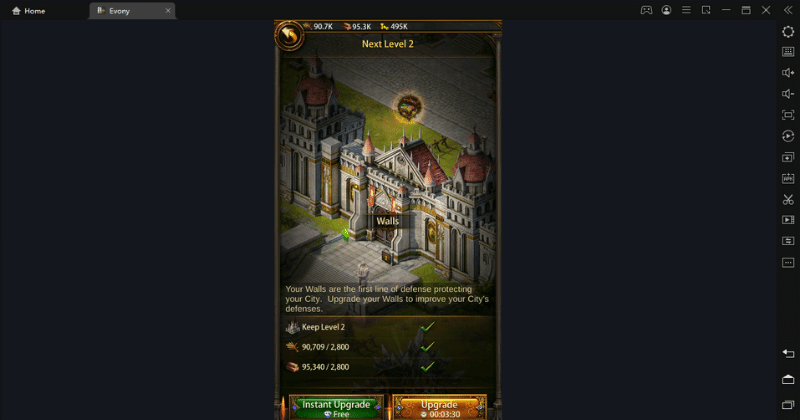 Players can also take their resources from the locations on the map. And also, completing our quests and defeating enemies are also other methods to earn resources. Always make sure to collect these resources whenever you have the chance because they help you progress from the game.

In Evony: The King's Return, speedups are significant to progress quickly from the game. But there is one issue here. Every time we upgrade our buildings, the wait time rises, so we need so many speedups at one time to progress from our game. Collect your speedups more by utilizing these methods.

Join for an Alliance in Evony: The King's Return

This is the next thing we will talk about under the Evony: The King's Return best tips and tricks. Being in an alliance gives you a lot of advantages from the game. When you are in such a clan, you will be able to have some conversations with them and take help from each other in need. 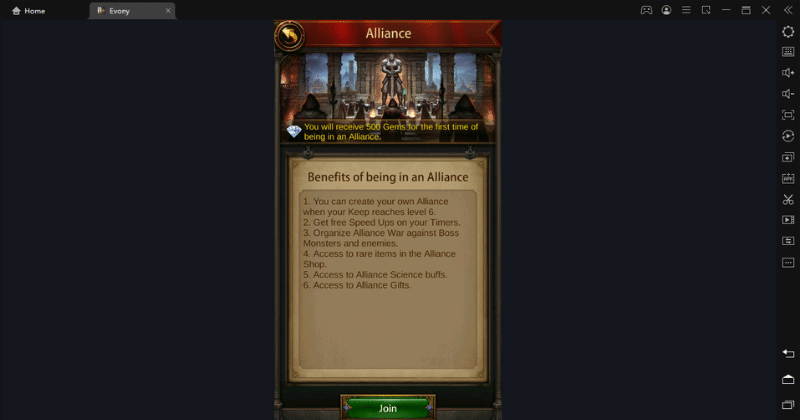 Joining an alliance is the fastest method to progress, and there will be an alliance warehouse, shop and gifts provided to you by joining these clans.

Find out the Goblins

There are some normal monsters in this Evony: The King's Return game which are known as the Goblins, and they can drop us honour, gold, points and experience from time to time. These monsters are placed on the map with all the other mobs. But Goblins are very special among all the other mobs because they can drop you so many resources. So you need to have a particular concern for farming these Goblin monsters.

There are levels for each goblin, and when you meet a higher-level one, it can drop more rewards than a regular one. If you are a beginner to this game, know that goblins are one of the very important aspects you can use to have the speediest scale because of the gold they carry out.

If you want the smoothest controls and handling over every movement and character control from the game, our best recommendation is the best android emulator: LDPlayer. It has this special feature called the Keyboard Mapping, which gives you the opportunity of creating a personalized keyboard with familiar settings for every movement you do in the game. So eventually, you will be able to ease your gaming with some smoothest controls than those default key settings from the game. 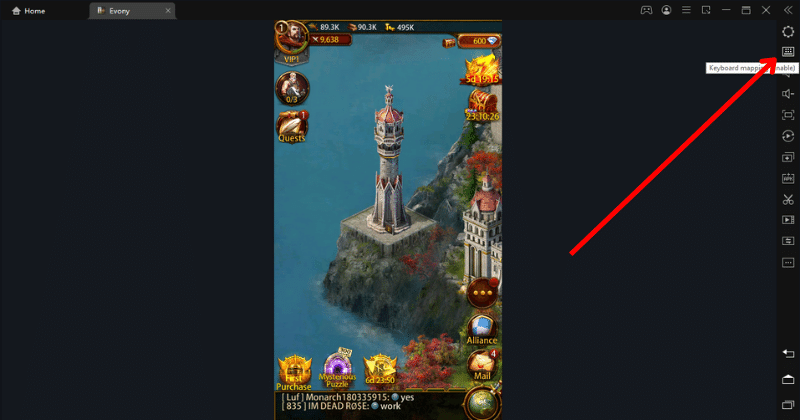 So that ends our Evony: The King's Return best tips and tricks guide, and this is now up to you to decide what you should do in the game. Every aspect of the progress has been described here to utilize in the game to do much better from Evony: The King's Return gameplay if you appropriately act as we guide here. Take your chance, and there is no need to be a witness to the loss anymore.