Disney Heroes: Battle Mode is an excellent gacha RPG having real-time combat, which was released globally in 2018, and from then on, it has become one of the best gacha RPG games containing Disney’s most popular characters and franchises, all within the same game world. All these heroes are brought together with an exciting story.

You have to bring your absolute best to Disney Heroes if you want to clear the stages efficiently as the game is simple but ultimately not that easy. You can download Disney Heroes: Battle Mode on PC. If you're going to enhance your experience on a bigger screen. 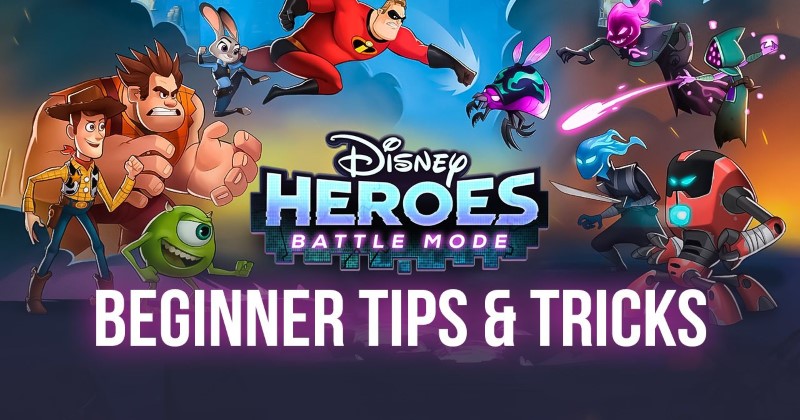 We have created this Ultimate Tips and Tricks guide to help you master the combat in Disney Heroes; that’s all the info you’ll need. It is a must guide for those who are just getting started to help you learn everything there is to know about combat, the game mechanics, which heroes to choose and pull, etc.

Before initiating combat, you always start by choosing the heroes that will go into battle. Either they'll be the higher-tiered heroes or your favorites; nonetheless, you have to decide to choose the right team for the particular content you are tackling, particularly concerning the roles of the characters you’re choosing. If you are starting off to a new server, try to focus on Sulley, Yax, and Nick Wilde and partying them up with one of Frozone and Vanellope, you’ll have enough power to cruise through the early game.

Making your team's formation requires you to put a tank up-front to take the brunt of the damage as they'll be attacked first. Otherwise, if you put a non-tank hero, all your other heroes might suffer.

We commend choosing a tank with one to two support and one to two DPS.

Powering Up Your Characters:

You’ll need to work on your heroes’ stats if you want to utilize their potential and wreak havoc on the game’s world. You should start by just completing the story as much as possible as it always grants you rewards and boxes, and you gain XP to level up.

You can also level up your heroes by making them drink bottles. These bottles are pretty standard.

The following method is to get badges, as by equipping them, you get passive boosts and improved stats. When fully equipped, your heroes are a sight to behold, and this is when you can promote them to the higher tier. Every time you do this, they’ll get stronger and require more badges to be promoted. When you promote a hero, he loses all stat gains. You get back a percentage of the enhancement in the form of SD cards, while all the gold that you had spent is used up.

Always fill up the badges to go up a rarity as you get more benefit. You can see what badges you will need by looking at the characters badge list.

Every character that you get in Disney Heroes: Battle mode will have their first skill unlocked. Some of them have an outstanding first ability, and these are the ones that you should invest in. higher rarity characters will have more skills unlocked as the rarity goes up.

The skills can be improved by spending gold, which becomes a nightmare in later stages as you’ll use it up quite often, and memory disks, which you can get by completing a friend’s campaign and this unlocks their passive abilities and using chips to improve a hero’s star level. Always level up the skills of your heroes if you have the materials for them. As we have said, you can unlock more hero skills by using gold and memory disks which you can get by doing runs in the Friend’s area of the campaign mode.

Level Up Your Characters Evenly:

Like other games, you may want to level a few of your heroes together as you never know which content requires a more specific hero. Remember that there is no such thing as a defined "meta"; it varies from server to server.

Completing objectives to obtain rewards is a great way to power up your heroes. Below you’ll find a few quick ways to do just that.

The higher the level of your team, the more challenging missions you can do, and more rewards you can collect, and the more you can spend on your heroes. Use every opportunity to collect them, as the more content you finish; the more modes are unlocked. So, always do daily quests and daily dungeons. The campaign goes through a series of missions in which you fight against other Disney heroes who are under a spell. Each mission and episode will reward your team experience, coins, and badges. Further on, you get better rewards. Later on, as you complete areas of the game world in the campaign, you get access to two other game areas. These area modes in Disney Heroes: Battle modes are the Elite Area and the Friends Area.

Elite Area – TheElite Area is more difficult, but it includes Hero Chips as rewards. This way, you can get new heroes and upgrade your old heroes by collecting Hero chips from this area, but the catch is it requires more energy and can only be run a few times a day.

Friends Area –This area consists of level rewards that grant you friend XP and memory disks for specific friends.

The game awards you with a lot of rewards when you finish some of the milestones in the medals tab, look through the list to see which of the targets you can achieve.

Following are some additional tips and tricks to further help you along.

While some skills are used for damage, others are just for applying debuffs or other negative effects that can be just as bad, or even worse, than simply suffering lots of HP damage. For example, Stun makes a character unable to do anything while cursed prevents healing. Blind reduces the accuracy of heroes while Charm turns the hero against their team. It’s essential to understand the consequences of these effects and use them wisely as some heroes’ skills revolve entirely around them.so, there are more ways to build a hero than just letting him dish out all damage. Using heroes efficiently is the key to this game.

Charm their strongest hero if the enemy team is solely dependent on that hero. If Charm is used, he can be a more significant asset for you than them. Stun incapacitates that powerful DPS, and you can capitalize on that situation. Experiment with all these possibilities.

Initially, in the game, you get a lot of stamina as you level up relatively fast and are showered with gifts and rewards. It is during the later stages in the game that your stamina is depleting faster than it refills. Either you wait for it to refill, or you spend your diamonds. Though initially, you should summon more to complete your team with higher rarity characters. When you have a proper team, you can spend some Diamonds when needed.

Rush Through the Story:

As soon as you are familiar with the game mechanics, finish the story as quickly as possible because along with rewards and crates, other modes will be unlocked along the way, and they'll be essential to your success.

Don't forget to pick up your free 2* hero that you get after completing the tutorial. Even if you don’t have 4* or 5* heroes at the start, you can always level up the heroes at had and finish the story mode at your own pace.

PVP Through the Arena and the Coliseum:

Arena serves two purposes. The first is to compete against other players and see what you're made up of. The second is to get more hero chips that you can increase by reaching higher Arena levels.

Workings of the Arena – The main summary of progressing in the Arena is progressing to a higher tier only if the enemies in that tier are lower than yours in power level. When you are in the tier that has the same power level as you, stay there by not ending up each week at the top 5 as then, you’ll be upgraded to the next tier, and in that tier, it will be challenging to score wins.

How the Coliseum Works – Where the Arena has a team of 5 heroes, in Coliseum, you have three teams, each of 5 heroes. You battle out with other players in a group of 15 each.

When on the offensive, distribute your teams evenly, so all of your teams survive if the first one fails. If you put the strongest in the first team, your opponent might be stronger, and the rest of your team may not stand a chance.

While playing defensive, include your strongest heroes in the first team because even if you only win one fight, you win the whole battle.

Enjoy Perks by Joining a Guild:

Join a guild as soon as you can to enjoy the perks as joining the guild grants you additional stamina, skill points, shop slots, and hero boosts. The guild also unlocks other game areas for you like Surge, City Watch, and Heist. These new areas will always have events that give out powerful rewards if you complete them.

LDPlayer has tons of features that help you to have more fun playing Disney Heroes: Battle Mode and enhance your gaming experience to the next level with improved graphics and framerate. For example, you can use the emulator’s in-built keyboard mapping feature to quickly bind keys to your mouse and keyboard, emulating the experience of an actual PC game. Disney Heroes: Battle Mode is a simple game when you start it for the first time and gets more complicated as you progress further. After you have learned all the essential tips and tricks in the guide above, you will be set to synchronize your team and heroes to a higher level, much more effortless.