Punishing Gray Raven is a Hack and Slash mobile game with many different characters and weapons to choose from. The game Gacha mechanics allows the player to get their hand on all the characters. A Player can use this Gacha Guide on how to get a hand on a specific character that they are trying to get their hands on. It will also help them by saving their Black Cards, which are a limited resource, especially if you are a free-to-play player.

Black cards are the premium currency in Punishing Gray Raven .black cards are the universal summoning currency and can be used to summon all banners. Each Banner needs their own currency, but the Black Cards are convertible. You can use Black Cards for other things as well, like stamina, but however, that is a very inefficient way to use your Black card.

How Many Black Cards Can You Get Each Month? The monthly card costs 4.99 dollars per month. Punishing Gray Ravan will give you 365 Black Cards to purchase the monthly card and give you an extra 100 Black Cards every day for the next 30 days. By getting the monthly card, your monthly total will be 9000 Blacks Cards which is more than enough for you to get your hand on that new character that will get introduced in the next month's.

A new S rank Character comes around every three months in-game, and for that, you need 15000 Black Cards. This means a fully F2P player can get all new S characters if nothing changes. Keep in mind there are also A rank and signature weapons that you might want to get your hand so be careful while spending your Black Cards.

At launch, there will be three tabs on the summoning menu each. The first Tab has the beginner and the later default banner. Each Banner costs 250 Cards; these cards could be either specific Cards or Blacks Cards. The highest rank that you can pull is an S rank pull.

Each banner roll will have a 0.5 Percent Chance of getting an S rank per pull. However, the beginner pity will allow you to pull an S rank  Character at the first 40 pulls. After the first pity pulls, the game convert's it up to 60 pulls for an S rank pull. Newly patched characters will be added to this Banner after one patch of their debut.

You can also pull an A rank from these banners. The A ranks that you will pull from these banners are not completely random. You can choose which A-Rank you want to get your hand on, and the game will give you Increased chances of pulling those characters by 80 percent. If the A rank is currently debuting, pulling that certain A-rank, chances jump directly to 100 percent. 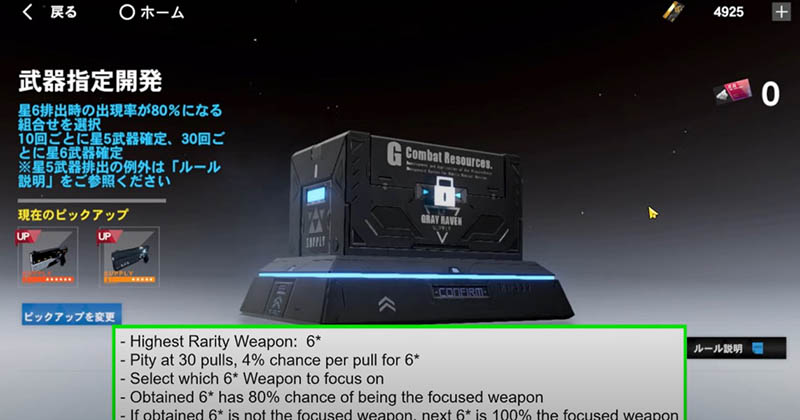 The highest weapon rarity in Punishing Gray Raven is six stars; you can get it from two different banners. The first Banner has a pity of 30 pulls, meaning after 30 pulls, you are guaranteed to get a 6-star weapon. Also, each pull has a 4 percent chance to get you a 6-star weapon.

For the standard Banner, you are allowed to pick which weapon you want to focus on. There is an 80 percent chance of you getting it when you pull an S rank weapon for every six-star weapon you choose. Every unit has its own six-star signature weapon, and when a new unit is patched in, their weapons can immediately be found here for you to get a pull on. If, for some reason, you are unlucky on that 80 percent drop rate, the next time you will drop an S grade weapon, you will guarantee a 100 percent chance of getting your focused weapon.

These weapon banners, unlike the first one, don't allow the user to pick which weapon they want to focus on. The Banner has the same pity rate and drops rate as the previous Banner. By logging in daily, you will get summoning tickets that are exclusively used for this Banner. Using your Black Cards to get a pull in this Banner is not recommended as the focus weapon banners allow a better value. These Debut Banners only give you the S rank banners that are currently debuting; you can not get any other S rank from these banners. There is a 100 percent chance of getting the debut unit once you pull an S rank unit. Also, the minimum chance of pulling out an A rank unit from this Banner is 1 per 10 pulls.

Rotating banners are random and change their focus unit every two weeks. There is a 70 percent chance on S Rank pull to be featured on selected units. You can choose one of the two characters that are on the cover of the banners. The Rotating Banner can also have non-starting roster characters to give you a chance to pick up missed S-Ranks.

For all the three tabs, the cost to use a banner is the same; however, the pity differs for each. Tab 2 banners got  60 pity with a 0.5 percent chance per pull to be an S rank. Tab 3 Banners got 80 to 100 pity range and a 1.5 percent chance to get an S rank. The rate for pulling an A rank unit is a Minimum of 1 A rank per 10 pulls for each Tab.

The Pity Carry Over

The Tab one banners are constant, so you don't need to worry about them. Tab 2 and 3 Banners either go away, or their rotating Banner period ends. The next debut or rotating Banner takes the place and pity of the previous Tab 2 and Banners. No Pity builds up across tabs or Banners, meaning Tab two and Tab 3 Banners never swap pitties even if the tab banner might look similar.

Trivia About the Gacha:

PGR memories are similar to stigmata and Honkai in Genshin Impact. The only two things you need the Gacha for are the units and the weapons.  The highest Rank memories you can get in-game are received from game modes like Warzone and different Events.

If you aren't attracted to the meta and only want to get your hands on characters that appeal to you, go for that. For those who want to find the meta unit, this is the strategy they can follow. For starters, focus on and plan around the debut banners as the 100 percent debut banner will never be coming back as they are only a one-time thing. Every S rank Character in-game is a must-have as their stats and DPS is off the chart compared to rank ones, so always go for S rank Characters.

You can focus on any type of weapons in the game at any time, so they are not a priority pickup. A new unit comes into the game every other patch starting with alpha one patch after launch. The update sequence for the units is always S Rank patch followed by A Rank patch and then Again S Rank patch. Patches are about 1.5 months long each, so save Black Cards to get your hand on that S rank unit.

Most of the A Ranks are very important to get for your team. However, they are not that important that you end up spending your Black cards on them. The events arriving with each new A rank will give enough fragments once, and you can farm fragments outside Gacha as well. However, there is an easy way to get new A Ranks up to S Ranks once they launch. For that, you need to maximize your Standard Banner Currency income by choosing the correct weekly quests. 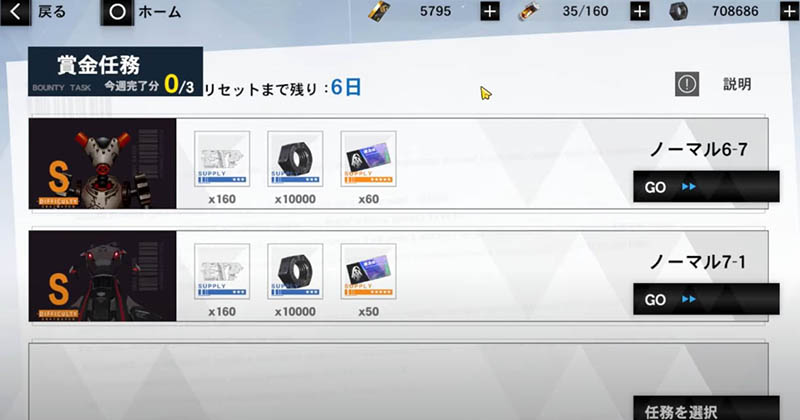 Once inside your weekly mission, click on one of the three free open slots. You are then brought to a menu where you can choose one of three quests. Here only ever pick quests that will give standard Banner Currency. If no asset gives the currency as a reward, you press the button on the top right to reroll the quest. You can do this seven times a day, meaning you have 49 rerolls in a week. Make sure only ever to accept the quests that give out banner currency not only for the A ranks but also because it builds up the 60 pity on the default banner for an S rank.

You can get 50 to 60 default Banner Cards depending on the quest you are doing. Factoring in rewards, patch compensation, and occasional downtimes, you should be able to get enough cards to get ten pulls by the time a new A-Rank arrives. Once the A rank drops, you pick up one copy to unlock the character, then you do their event and get 30 fragments a day. This will be enough to make them an S rank. If you pull the character after unlocking them, the duplicate A-Rank will only give you 18 fragments. So pull A rank first and then upgrade with each fragment as it will help you take your character to S Rank.

The Gacha system in the game allows the players to get their hand on any character they want. The game has a fascinating reroll mechanic, which depending on the Banner, could be wholly randomized but also guaranteed. The Gacha system in-game is the best way to get your hand on some specific 5-star weapons. So follow this guide on Punshing Gray Raven Gacha System to efficiently use your Black Cards and Banner Card. If you are confused about which unit to open first check out our Character Tier List on Punishing Gray Raven.