The World of Dragon Nest is a semi-open world MMORPG with great popularity, using an unlocked third-person perspective that gives players complete control over the actions of the characters. The game is about the evil Black Dragon appears and destroys the land of Alceringa. You can play as warrior, archer, cleric, sorceress, and slayer to protect Alecringa.

Every class has distinctive characteristics. Moreover, after each initial class has reached the level of 15, you can complete relevant tasks and advance to two different roles. When you level up to 45, the second character progression is based on the first character advancement and you can get more characters. You can learn new skills and wear special equipment for the new character once completing the advanced level.

Warriors are the incarnation of strength and courage, a typical vanguard class and the only class with charge skills. Their main weapons are sword and axe. As the bravest fighters, they are good at fighting in close combat, shooting big sword waves, and attacking the targets by creating typhoons and explosions. With high running speed, they can support their teammates in time on the battlefield. 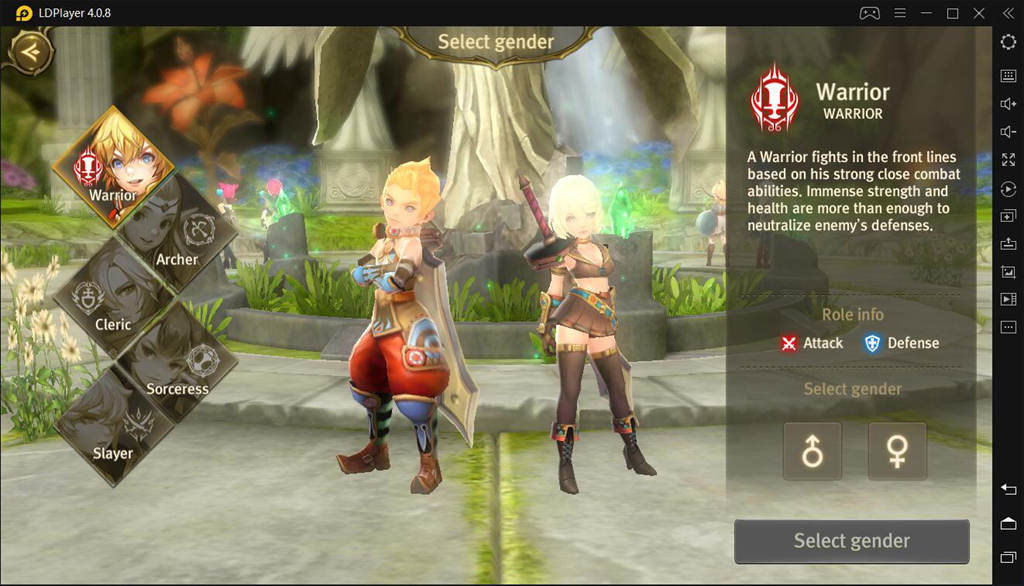 Mercenary and Sword Master are the advanced characters when you are at level 15. Mercenary using axe and hammer has strong fighting ability and survivability, while Sword Master is capable of multiple dexterous and powerful blows through the sword. Mercenary will change to Barbarian and Destroyer when you level up to 45, likewise, Sword Master will advance to Gladiator and Moonlord.

Archers are elves and the embodiment of swiftness and nimbleness. They are as quiet as a maiden but move likes rabbits so they move quickly through the battlefield. Their weapons, low brow and cross brow are suitable for long-range assault. Thus, Archers own great strength to shoot arrows reaching maximum distance. 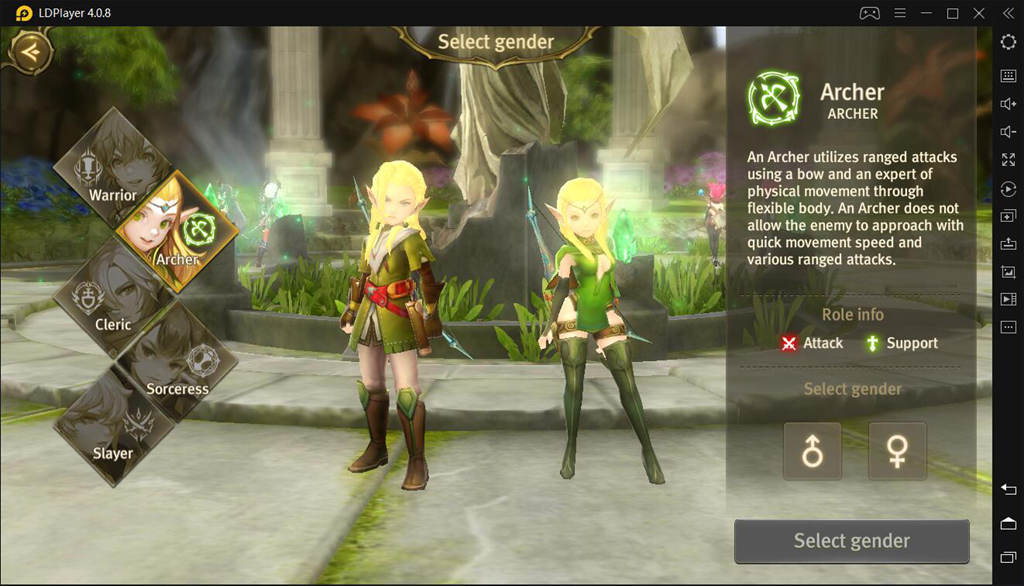 At the first advancement stage, your character will become Bow Master and Acrobat. Bow Master does well in wide-area archery and combat magic, and Acrobat is good at wandering in the enemy position with enhanced buffs and varied kicks. When you reach level 45, the two characters will respectively become Sniper or Artillery, and Tempest or Wind Walker.

Clerics are cold aristocratic noble priests, being the member of Temple Knights and the leader of a team. They are Melee warriors who can attack and defend using light spells and healing spells at medium and long distances. Also, Mace and Wand are the weapons of Cleric, focusing on short-range. They have unmatched fighting quality, so their top priority is to protect teammates in battle and combine the strength of the team. 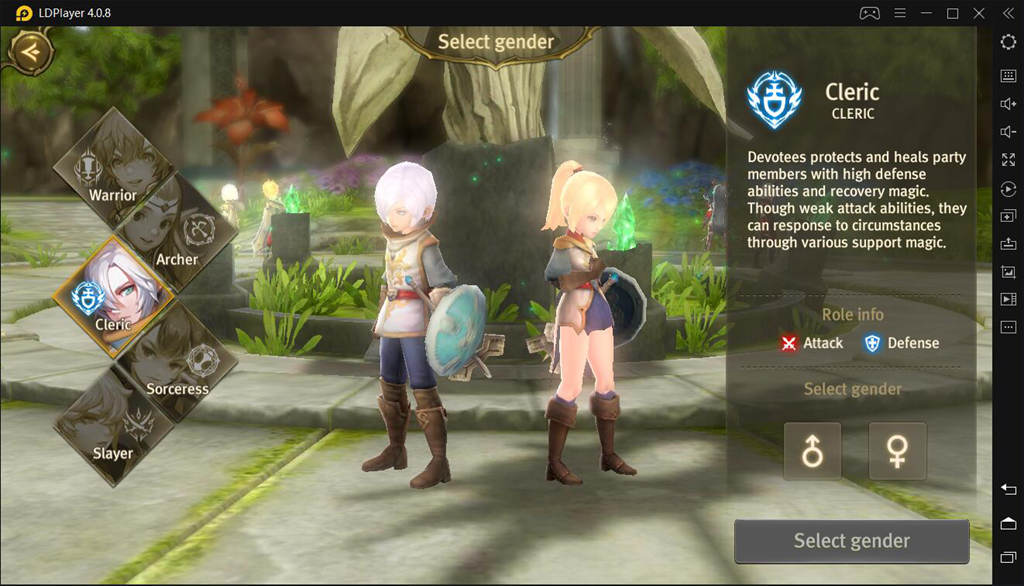 At the level of 15, Cleric will advance to Priest whose totem system can control the movements of the enemy while assisting his teammates, and Paladin whose assault capability is second only to Sword Master. Reaching level 45, Priest will become Saint and Inquisitor, similarly, Paladin becomes Guardian and Crusader.

Sorceresses are known for their sharp intelligence and powerful magic spell. They can use magic to cause damages, with four types of spells: fire, ice, dark and magic. Sorceresses make use of a long staff as the weapon and carry a grimoire book, puppet or magic ball to provide different assault modes. 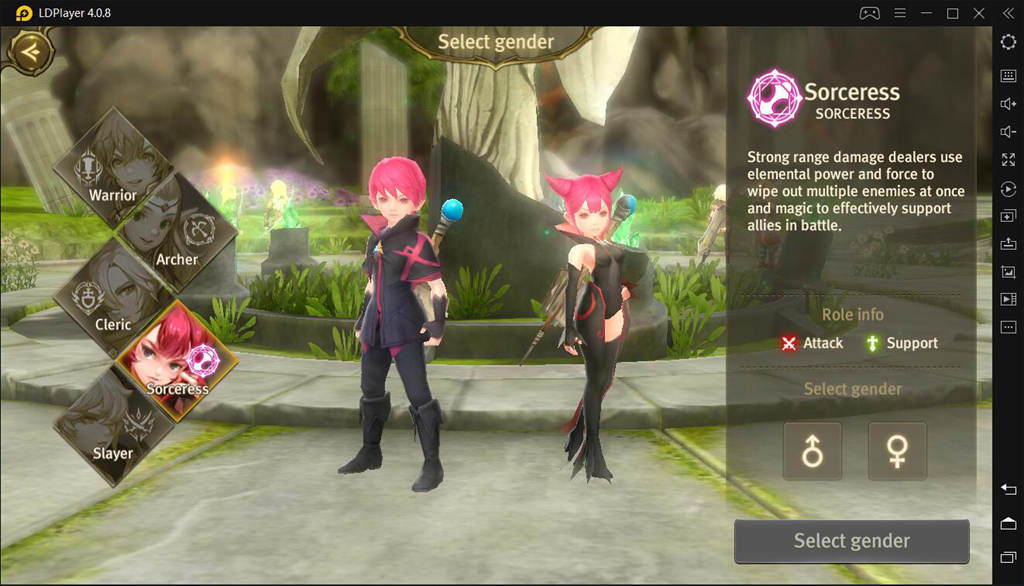 The class will upgrade to Elemental Lord concentrating on fire and ice magic, and Force User whose major means of attacks are dark and magic when you level up to 15. Plus, when you are at level 45, Elemental Lord advances to Saleana and Elestra, the two characters inheriting and developing respectively fire and ice magic, in the same way, Force User becomes Smasher and Majesty.

Slayers are prominent members of the Shadow Army. As the seventh person of the Dragon Legion, slayers are a rather powerful new force. The slayer is a male character, as well as a mad fighter with a dual personality. In combat, the slayer becomes a merciless opponent, and its magnificent skills and brutal attacks always make the enemy no counterattack. 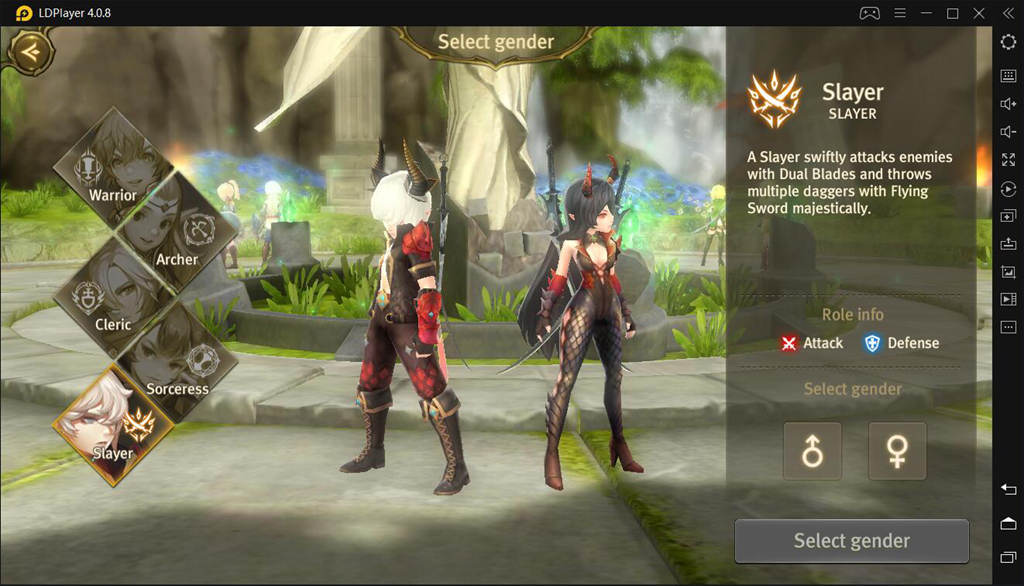 Dual blades and flying swords are the main weapons of the slayer. The character named Bringer takes advantage of the short sword and combines lightness and dark to fight, and Dark Apostle can use a variety of hidden weapons to track down the enemy and carry instant assassination. You will get the two characters at level 15. Also, Bringer will change to Light Fury and Abyss Walker, while Dark Apostle becomes Raven and Ripper.

It is recommended that you can choose Slayer to play the World of Dragon Nest better. Because this class is not only good at the close fight by using blades and rods but also does well in a ranged attack using crossbows and scythes. Therefore, slayers always bring pain to the enemy in profound silence, and slayers will help you win the game easily.

All in all, you can play as warrior, archer, cleric, sorceress, and slayer to fight with the evil Black Dragon and protect this mainland. What’s more, LDPlayer, a free Android emulator, can help you play the World of Dragon Nest on your computer. We’re sure that you can get a unique gaming experience.

How to Play Last Day on Earth on PC How to Solve World of Dragon Nest (WoD) Server Maintenance