Let's move into the medieval era with a fantasy plot created, and it comes as a city building and a strategy game for the mobiles as War and Order. As you can guess, we have to create our army here with Elves and Orcs, and they should be used to defend the castle in the game. And also, you will build up your own world here with the players who are coming around the globe and let's have our world with a War and Order beginner guide with the best tips and tricks. 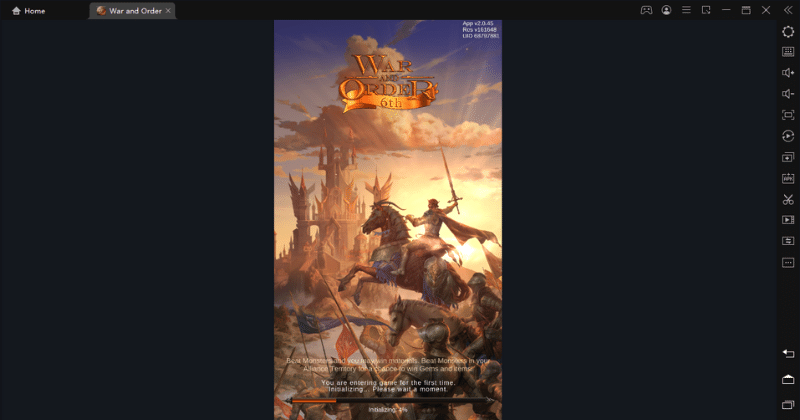 As we said earlier, in this game, you are going to create your personal castle, and building should not be your only task here. We have to strengthen the defence to protect this castle and fight against the ones who come to surrender us. And for that, we need to have a better army with powerful skills, and basically, the game asks you to plan on defeating the mightiest enemies in the game strategically.

So let's see how we can do these all in War and Order and how we can create the strongest army and do better with this medieval age world with the best powers from this beginner guide with tips.

First of all, you need to understand the basics of your game as it can help you understand how the gameplay goes in War and Order. At the start of your gameplay, a tutorial will be there to show players what basic elements are there with the game. And after you finish the tutorial, you need to have resources to build up the structures, so you need to start gathering them. 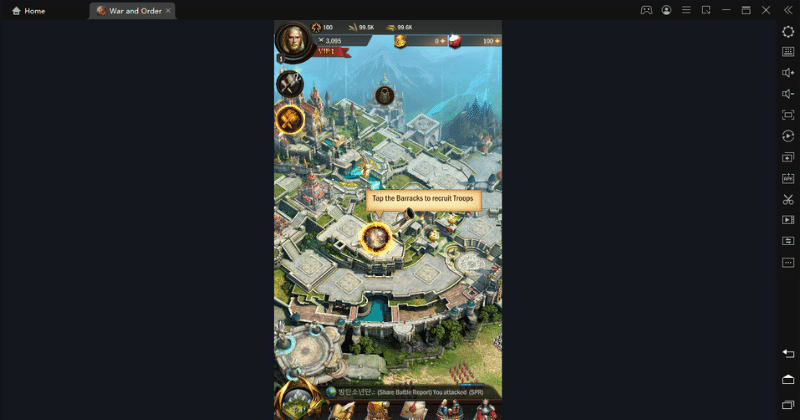 Building structures in War and Order can give you more and more resources at your hands, and it can also increase the army's power and the defence of the kingdom. If players want to have more resources and items, they simply have to train their army that comes with the fighters and then give their best effort to challenge their enemies in a huge land.

When you go more and more with the gameplay, you will see that there are so many rewards to be acquired, and they come with quests, check-in and event rewards. And as a basic point of gaming, you need to make sure of joining an alliance as it can give you more benefits.

There are three currencies that will primarily feature in this game gems, food and wood. You can have food and wood currencies easily from the game, and those can be used on your levelling up and upgrading processes quickly. The gems are hard to have, and those are used for the substituting purpose of the lacking items. 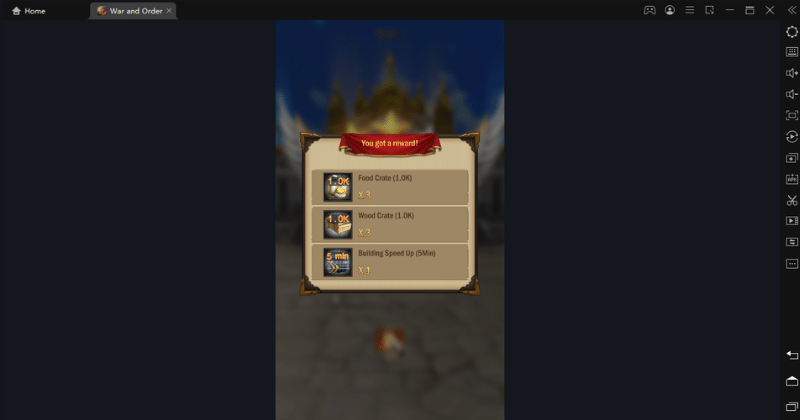 Resources can be taken by utilising several ways. The primary way is to collect the resources which are offered by your building. And then you can complete the missions of the King's Roads as well. You can also battle with mobs and take down the resources from other players. It can be done by attacking their castles.

Resources can also be taken by claiming our rewards, and these are included with the event and log in rewards. If you can keep an eye on the people who live in your kingdom, you will know that they are giving items to you from time to time, and they are very useful to become stronger at your gameplay.

Joining an alliance can also be a path to having additional resources in the game, and it comes with alliance bonuses and external help.

The Lord Character and the Specific Skill Points

You are the lord character in this game, and this character has to be upgraded with time in War and Order as it helps you progress more in the game. When you have upgraded this lord in time, it can help you have the best result from battles and increase your army's power. 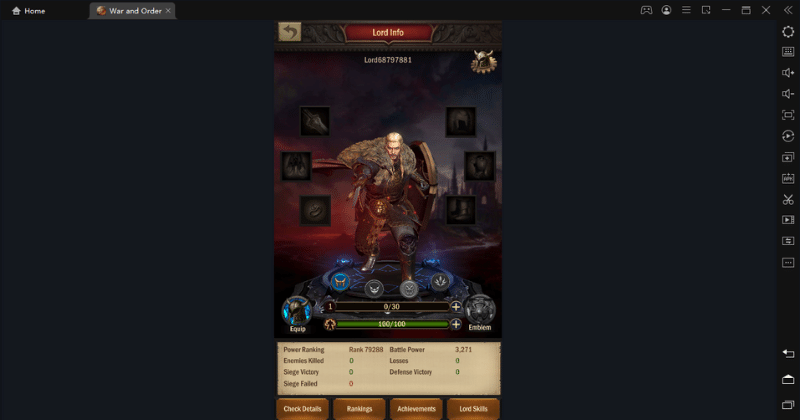 When players are progressing more from the War and Order, the game will offer them skill points, and these skill points can be later used on boosting the lord and upgrading his abilities. You will see two ways of increasing the battle power here, and those two come as development and war.

The section development is responsible for boosting the building, upgrading, and harvesting matters in the game. And when it comes to the war category, it can increase the battle power from defence and damage against the enemies, and it can also increase the power and speed.

If the skill points are not satisfactory to you and if you have finished them already, they can be reset without any issue. And also, players can save several setups of skills which can be further used for multiple scenarios. But note that switching between your setups and trying to reset them cannot be done for free, so you need to have a wise choice for selecting these skill points in the game.

Quests are very important for a player to have better progress in the game as they can earn you rewards, keep you on the right track and give you the most important content in the game. There will be six quests you can see from the game's main quests, daily quests, alliance quests, weekly missions, events and the challenges. 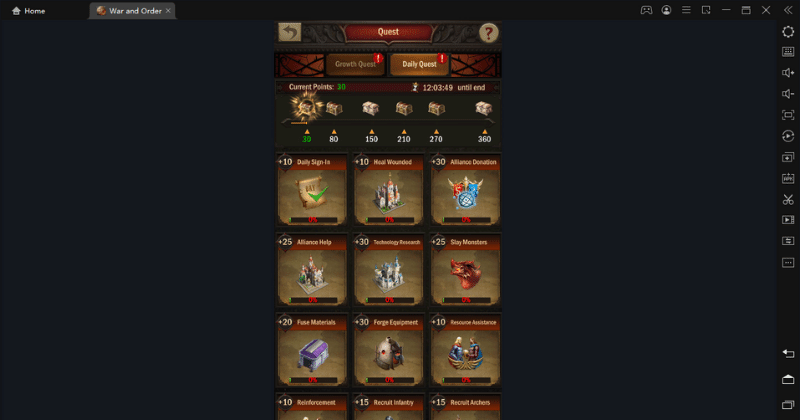 Completing weekly quests each day can earn you a badge as a bonus, and when a player has taken enough badges, those can be exchanged, overtaking more resources from the events. A 7-day event completion of the game can offer players a grand prize, and it will be a level 5 blue equipment.

If you want some more familiarity with your gameplay, try to go for the best android emulator: LDPlayer, as it has a feature to create you a personalised keyboard. The Keyboard Mapping feature of the emulator is the feature you need to utilise here as it can set up your most familiar key points to the game controls with a personalised keyboard setting. 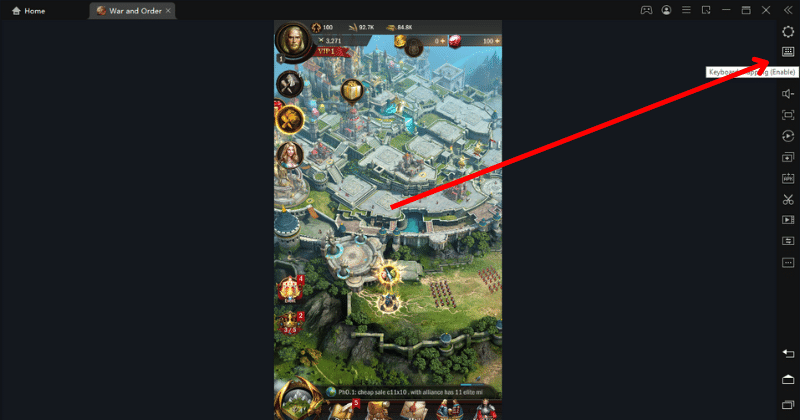 So that is all with the War and Order beginner guide; with their tips here, and now you can make yourself ready to set out in this world and conquer from all those battles. By reefing these all tips. You will have your best progress from the game than ever and don't forget to utilise these tips and tricks from your game as it can generally increase your gameplay experience with much progress.