Rise of Kingdoms is a incredibly huge mobile game. You can play in a way that suits your style, whether it’s a reckless military adventurism and dreams of global dominance, or quiet and unobtrusive statecraft and dreams of a happy populace.

In Rise of Kingdoms, you’ll find a seamless and highly detailed world map, with 8 civilizations and 20 Heroes to choose from. Each has specialty troops and buildings with unique upgrades. You’ll also research technologies from various eras, join alliances, and manage the growth of your cities. Lead your civilization to glory!

Playing Rise of Kingdoms on PC will give you a much better gaming experience while at the same time allowing you to control your troops smoothly and without lag. The best and most important thing is that it is completely free. And you can play multiple accounts at the same time.

Playing Rise of Kingdoms on PC and Mac will prove many things for your ROK gaming experience: it will make you a better player, allow easier control of the army, you won’t be left behind in big battles, and last but not least is the fact that it is completely free.

USE LDPLAYER FOR RISE OF KINGDOMS ON PC

This is why LDPlayer has made it easy for you to play Rise of Kingdoms on your PC.

List of PC requirements for playing Rise of Kingdoms on PC:

· OS: Microsoft Windows 7 and above

· Permission: You must be an Administrator on your PC

FAQs ABOUT RISE OF KINGDOMS FOR PC

Q: Can you play Rise of Kingdoms on PC?

A: Yes, you can play ROK on PC or Mac with LDPlayer and it’s free. All you need to do is download LDPlayer Android emulator on your PC and install Rise of Kingdoms.

Q: Can I play Rise of Kingdoms on Mac?

A: Yes, You can play ROK on Mac using LDPlayer Android Emulator.

Q: What is the goal of Rise of Kingdoms?

A: Rise of Kingdoms is a base building game with the main objective of it being the development and success of a single kingdom that the player is in command of. The game starts by having the player select one of the eleven civilizations with each of them having their unique perks and mechanics.

Unique zoom method + high-quality 3D graphics. Switch seamlessly between the world map and detailed views of your city’s buildings, perfect for crafting your next strategy. Send your units into the fog and explore a huge and realistic world.

Is it the hero who creates the legend? Or the legend that makes the hero? Summon Julius Caesar, Cao Cao, Joan of Arc, and over 20 historical leaders from around the world. Use your heroes to command troops, go on expeditions, launch joint attacks, and defeat your enemies with overwhelming force!

The heart of any civilization is its capital city. After you have chosen one of 8 civilizations, you control the development of your city. Watch your city’s progress from the Stone Age to the Feudal Era, and watch it gradually expand.

No civilization grows in isolation. You must always be ready for battle! Form units and create alliances to defend your territory. You will share the map with thousands of players around the world as you compete for resources. Use the realistic map to strategically defeat your opponents. 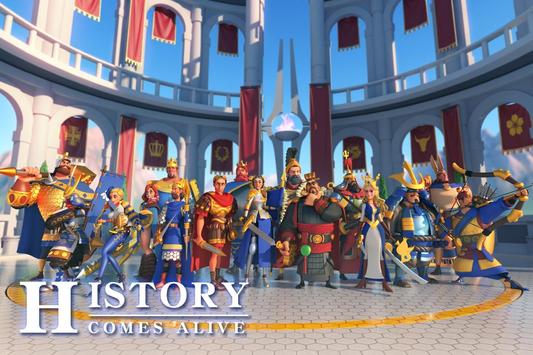 How to Install Rise of
Kingdoms on PC

Why Use LDPlayer for Rise
of Kingdoms PC

Ready to Play Rise of Kingdoms on PC？