It is difficult to choose from all the characters available in the Tales series. However, we have ranked the Tales of Crestoria characters in a tier list according to their strength so that you can use them and win battles easily.

Tales of Crestoria is the mobile version of the series. It brings back many fan favourite characters and also introduces some new ones.

These are the best Heroes in the game. They are a few of the overpowered characters.

These are also some of the best Heroes, but they are not as strong as those above.

These are some of the great Heroes in the games. 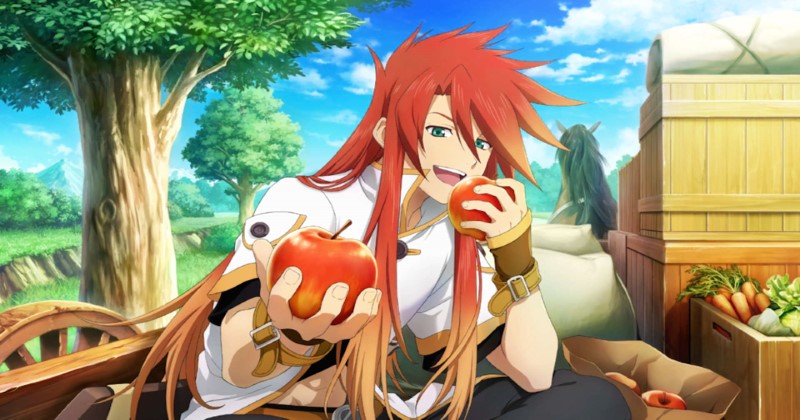 These Heroes are not that good, and use them only if you have no other option.

Following are some Memoria we listed to give you some more info in the game. 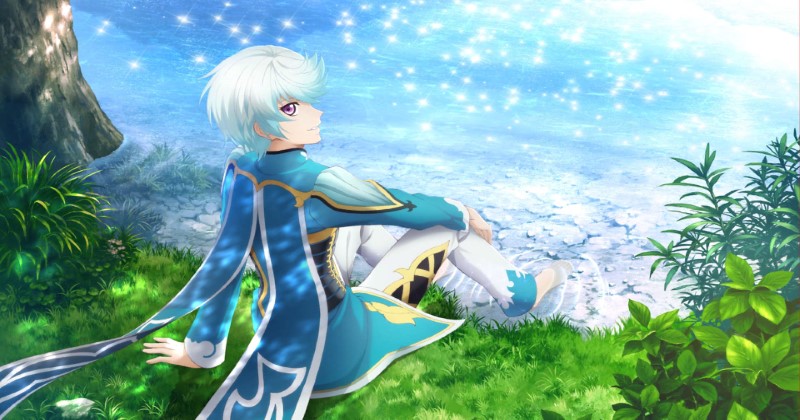 These are the best Heroes in the game. They are a few of the overpowered characters.

A woman with long black hair, Velvet, is driven by feelings of anger and resentment. She is traveling with Milla to help her complete her mission, but their partnership is uneasy.

Velvet was once an ordinary girl living in a frontier village with her brother, sister, and husband, Artorius. But after the events of the Advent, she became a seeker of vengeance and an enemy to the world. Her obsession with revenge left her cold and brooding, but she discovers a reason to live during her journey with her companions.

Below are Velvet's Stats and basic info – Power Past Perception, followed by his skills and Artes.

Sync can use this stone to CRIT more often due to his quick cooldown and low Mystic Arte cost.

Zelos: (Summoned with a rose)

Zelos is the current Chosen of Tethe'alla. His lust for women often leads him to behave in a buffoonish manner, but he's actually quite perceptive. He resents his role as the Chosen because it cost his mother her life and agrees to help Lloyd's party in order to free himself of its burden.

Below are the Stats and basic info of Zelos – Power Past Perception, followed by his skills and Artes.

Skill: My Incredible Skill: +8% DEF to all allies.

Skill – Bittersweet Chocolate: +10% Max HP to all allies. +10 to the OL Gauge of fire allies when healed.

Ludger is a young man of few words. He excels at housework and is a masterful cook. In battle, he fights with dual blades, dual pistols, and a sledgehammer. 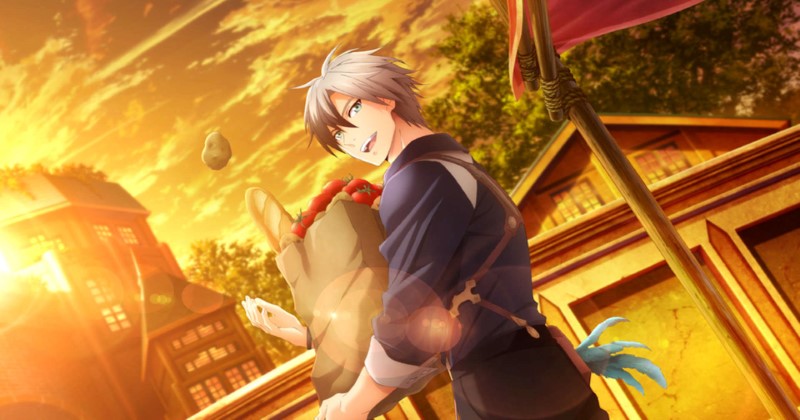 A young man from Trigleph, Ludger, gets ensnared in an incident related to his brother and ends up massively in debt. Along with a girl named Elle, whom he met during the incident, he now seeks the Land of Canaan in order to save the prime dimension.

Ludger Will Kresnik is Tales of Xillia 2’s main Protagonist. In Tales of Crestoria, Ludger has both average DEF and ATK stats. His Awakened Passive, Jack of All Weapons, provides conditional buffs that activate, reaching the 20-hit mark. It grants an extra 10% ATK to all teammates and lodges an extra 12% ATK boost to allies with dark elemental affinity.

His Mystic Arte, Ritual of Destruction, does 340% DMG to a target and banks 15 hits. Another notable skill is time disintegration, which does 140% and also reduces the DEF of his target by 10%. Ludger is a definite plus for Dark Raids and is also one of the best heroes to use in Wind Raids.

Rutee is a lens hunter who isn't afraid to break a few laws if it means getting paid. She uses the proceeds to fund the orphanage where she grew up. While on their adventure to save the world, Rutee finds herself growing more and more interested in Stahn. 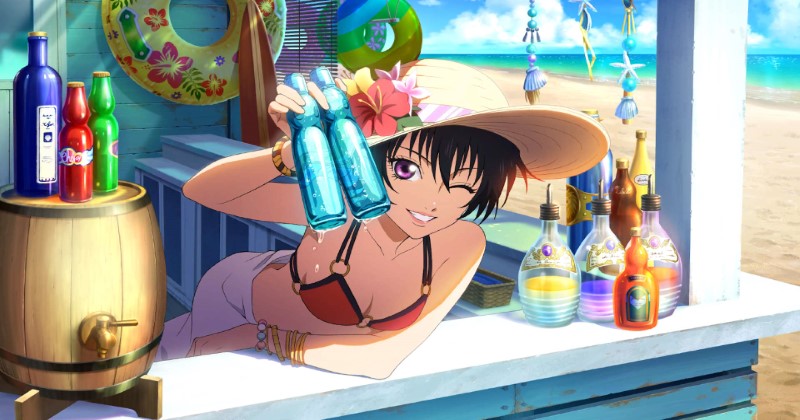 Below are the Stats and basic info of Rutee – Power Past Perception, followed by his skills and Artes.

Let’s take a look at his Memoria - Stats and Skills.

These are some of the great Heroes in the games.

A pure-hearted young man who works as a sell-sword, Asbel has been hired by the distinguished nobles of House Fabre to serve and protect Luke. It's Asbel's nature to take care of others and never ignore those in need.

Asbel – Under an Azure Sky:

Asbel Lhant is the main Protagonist in the Tales of Graces and maintains an overall balanced build in Tales of Crestoria. His Awakened Passive, To Know True Strength, can boost the ATK of water elemental allies by 20% after reaching 20 hits. 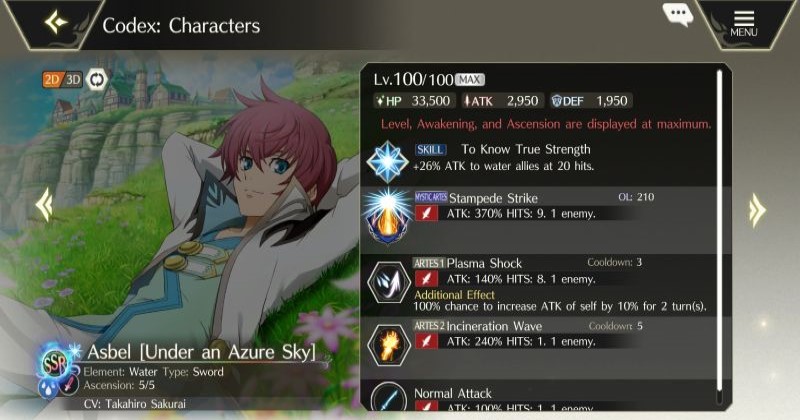 A notable skill is his First Arte, Plasma Shock, which can boost his ATK by 10% for two turns. His Mystic Arte, Stampede Strike, is fairly strong as well as it deals 370% DMG with nine hits. Asbel is a good choice of character to use both in Fire Raids and Water Raids.

Below are the Stats and basic info of Asbel – Under an Azure Sky, followed by his skills and Artes.

Let’s take a look at his Memoria Stats and Skills.

Memoria Analysis – Tech skill is serviceable, especially for characters who require a critical hit to charge their Mystic Arte sooner but combined with the low ATK stat on this stone, there are better options.

A mysterious being who commands unfathomable power, Chronos bears a deep enmity towards humanity. 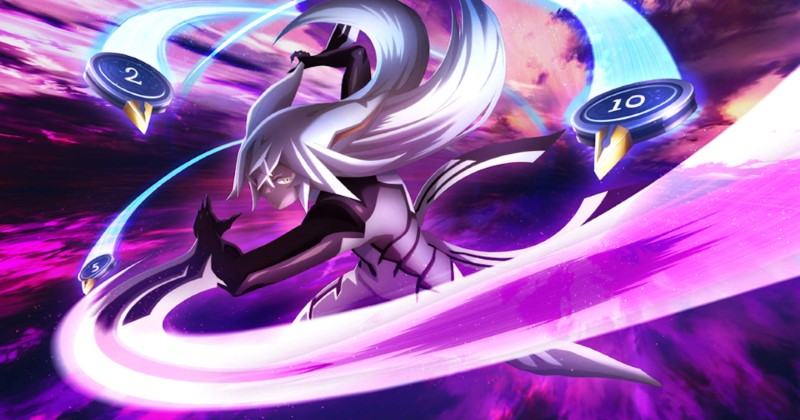 Our only PvP exclusive unit so far. Chronos is one of the other very few Martial Arts units. He was designed for PvP, with possibly the only AoE MA at an above-average cost of 240 OL. This generates 48 hits on a full PvP encounter, alongside his second Arte, pushing him to 52 hits (1 less than Yuri). However, his MA hits like a wet noodle. His overall stats across the board are fairly above average—definitely a strong unit for PvP, but no place in PvE.

Heartless One – Restores HP of allies by 5% at the start of the wave and increases 10% ATK to dark allies.

A young man runs a swordsmanship dojo in Dalchia Village. As a student of the dojo, Kanata addresses him as "Master Cress." Despite his gentle and caring demeanor, he possesses the courage and determination necessary to face his enemies head-on. 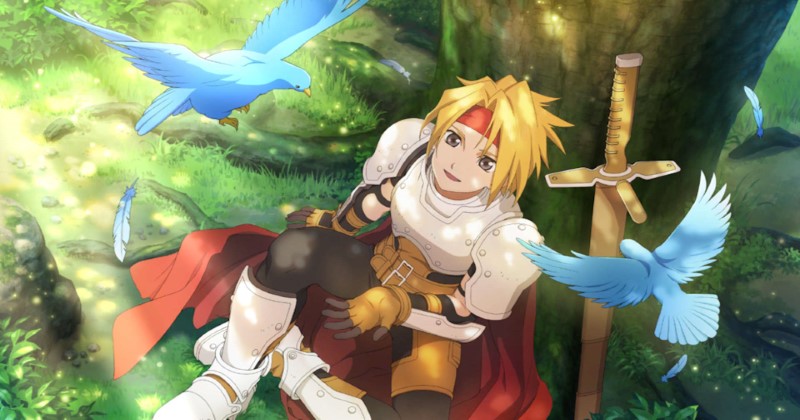 A girl who acts like a grown woman, Edna is typically reticent and cold. Despite her cute outward appearance, she has a sharp tongue and enjoys tormenting and confusing others. 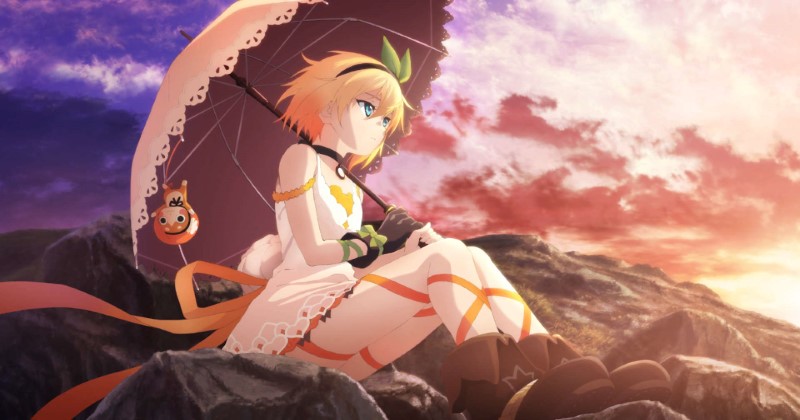 Rita obsessively studies blastia in the academics-focused city of Aspio. She's a genius but is regarded by her colleagues as an eccentric due to the extremeness of her theories and behavior. She agrees to cooperate with Yuri's party in order to clear herself of suspicion of a blastia core theft. 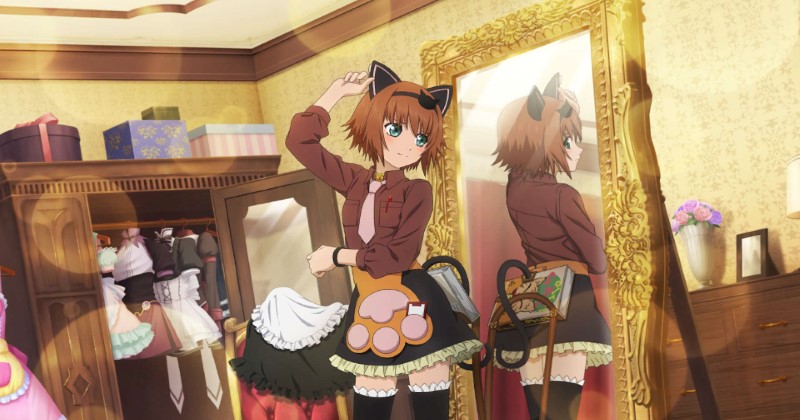 Below are the Stats and basic info of Rita – Power Past Perception, followed by his skills and Artes.

4% chance earth allies' cooldown of artes to reset after use.

Let’s take a look at his Memoria Stats and Skills.

A young man who can succeed at just about anything he tries, Jude is an exceptional student. He's eager to help others to the extent that borders on meddlesome, but it isn't in his nature to leave well enough alone, even if he knows it's going to get him into trouble. 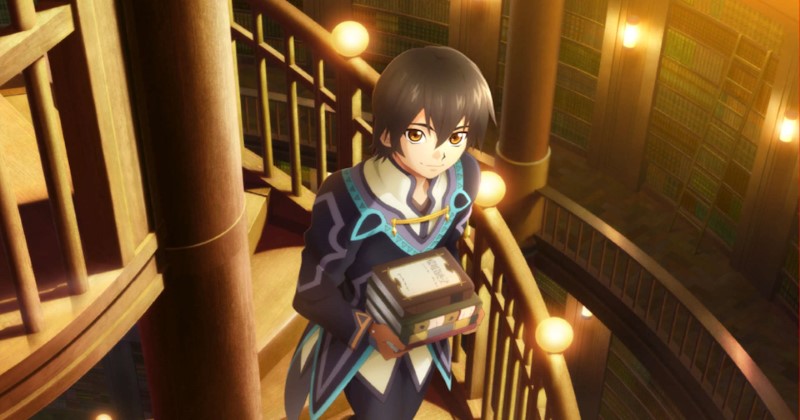 Max Skill – Friendly Med Student: +12% max HP to light allies and restores HP of Light allies by 5% at the beginning of a wave.

The story's Protagonist and the only son of a respected village leader. He espouses a desire to protect the weak but is rarely taken seriously due to his obvious naiveté. He believes strongly in vision orb justice and only opens his eyes to its cruelty when the system brands him as a criminal. 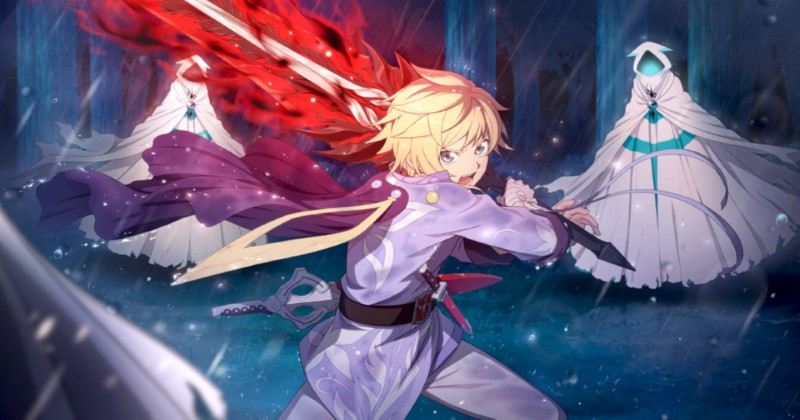 The game's Protagonist, Kanata, is naive to the ways of the world. His earnestness can sometimes come off as condescending due to his unearned belief that he is a strong and righteous person. That said, his words and behavior really are born from a heartfelt passion for justice.

Kanata is a fairly good unit. He’s one of the few that has an all enemy targetable AoE Arte. His stats across the board are above average, ad he’s a light unit. His MA is pretty good too.

Zelos is the current Chosen of Tethe'alla. His lust for women often leads him to behave in a buffoonish manner, but he's actually quite perceptive. He resents his role as the Chosen because it cost his mother her life and agrees to help Lloyd's party in order to free himself of its burden.

Kanata Hjuger is the main Protagonist in Tales of Crestoria and is a balanced type of character in both versions of the game. Kanata's awakened passive, Transgressor's Strike, is potentially the best one to have in any party as it gives all the characters an extra 15% ATK.

A notable skill is Rending Bite, which is an AoE ATK that does 110% DMG to all targets. With his passive skill, Kanata is considered one of the best heroes to use in PvP combat and is a great unit to have in both Light and Dark Raids as well.

Transgressor's Strike: +15% ATK to all allies.

Memoria Analysis – Onslaught skill that can be used by all characters and has a balanced stat block makes this a versatile stone, though in many cases, other skills such as Mastery or Torment would be considered.

A wild young man who seems to take little seriously, Zelos spends much of his time hitting on women. However, he possesses keen powers of insight beneath his frivolous demeanor.

Below are the Stats and basic info of Zelos – Power Past Perception, followed by his skills and Artes.

10% HP of Dark allies was restored every turn. (MAX)

A main character in Tales of Hearts, Kohaku Hearts, is built to be an offensive unit of Tales of Crestoria. Though still considered average in terms of overall stats, her value largely comes from her passive skill and her support capabilities. Mistress of Kicks is an awakened passive that not just boosts HP of all allies by 12%, it can also increase the OL gauge of Martial Arts type by 10%.

Her First Arte, Anti-Magic, guarantees to remove all physical ailments from an ally once every three turns. Though she currently does not excel in any particular game mode, her passive bonuses can be put to great use with the right team.

Skill – Mistress of Kicks: +12% Max HP to all allies. +10 to the OL Gauge of martial arts-type allies when Artes used.