As GOAT Games has made Dragon Storm Fantasy available globally on iOS and Android with its official worldwide launch, it’s time to see what this MMORPG has offered. This is a mobile game with a fiercely competitive side to it, and while it might not suit everyone, it brings many interesting aspects to the table that definitely deserve your attention.

However, it’s also important to dispel the stigma that mobile games have inherently bad touchscreen controls. On the contrary, there are quite a few Android emulators on PC that allow you to comfortably play most, if not all, mobile games without a hitch. I’ve played this game on PC without any issues, and so can you. Now, let’s dive right into the game. Dragon Storm Fantasy follows a formula that you will surely find familiar, but with the unique feature that allows your human hero to transform into a dragon. Transformation into a divine dragon comes in handy because it gives your character incredible destructive potential.

In this game, you don’t just gain levels - you eat levels for breakfast, and before you know it, you’re already over level 100. It’s crazy when you think about it, but unlike many other games where you barely see any progress beyond level 40 or so, this game will always keep that green bar going.

As I’m using LDPlayer to play this game on PC, so I set three keys for skipping the story, collecting rewards, and auto-missioning. That’s why I can level up extremely fast.  But I’ve just played well beyond level 100 and have barely scratched the surface. Not to mention there are world bosses requiring a level 700 character to challenge. Now that milestone is going to keep you glued to the game. 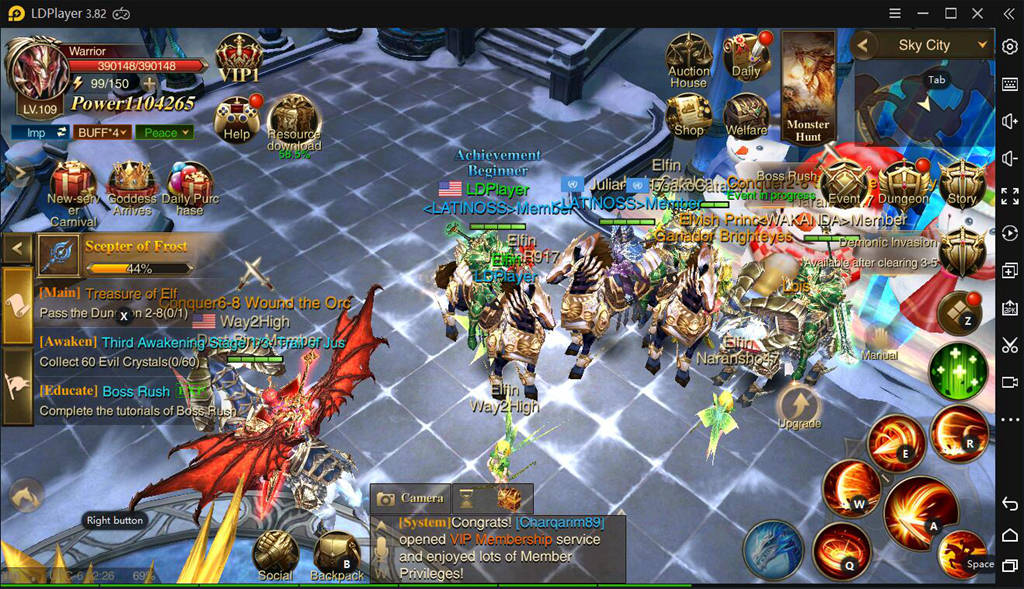 Let’s talk classes first. There are three of classes to choose from, and your selection is only limited by gender. Here, the focus is on the divine dragons and what they add to the game. The classes are the Archer, Warrior, and the Mage, each having unique introductions highlighting the dragon transformation, which adds a nice touch of style and choice of roles.

Like I said before, you can transform into a unique Divine Dragon, choosing your favorite as you unlock new creatures and upgrading them in the process. There are several to choose from, with each respective dragon representing the powers of frost, fire, light, darkness, life, time, and space. In dragon form, or more specifically, in a hybrid human-dragon form, you get new skills that deliver exponentially more devastating effects on your foes.

The first dragon that I got was the Divine Dragon of Frost. This dragon increases damage to nearby targets and slows them down. With its ice-based attacks, such as ice cone or cold spur, it can deal damage to several foes. The next dragon you get is the Dragon of Life, represented by an elf dressed in green, capable of dealing damage but also recovering a part of your health during the incarnation period. 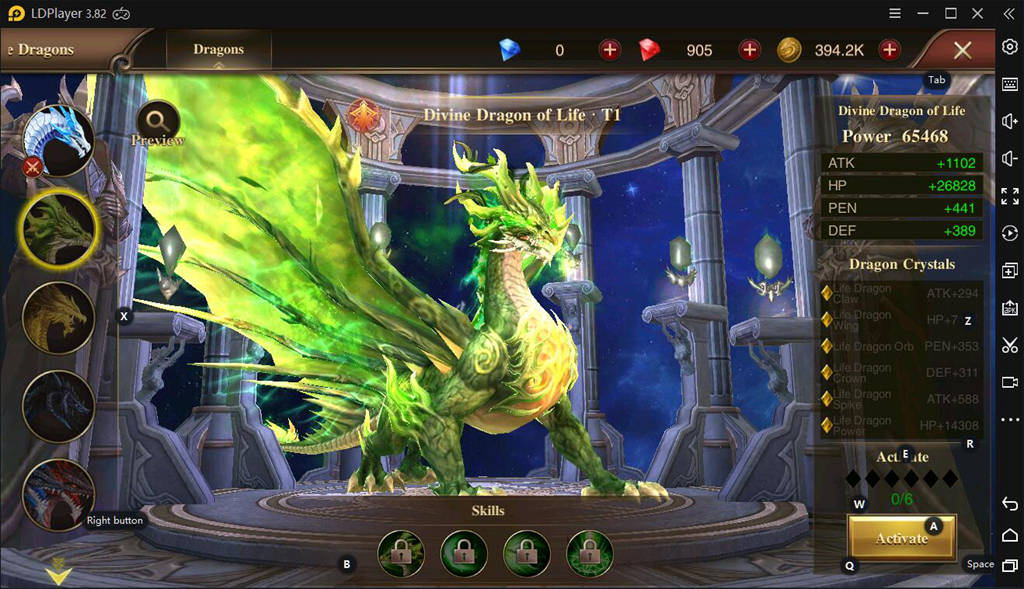 The early levels don’t pose much of a challenge, feeling more like an extended tutorial that gradually unlocks feature after feature, teaching you the ropes and describing every single way that you can level up your character. The UI shows you dozens of ways in which you can level up your character, with options neatly divided into every area that you can think of - companions, divine dragons, mounts, the forge, skills, and so much more.

The forge, for instance. This is where you check your equipped gear and enhance it. You have different gear tiers with diverse stats such as attack, health or defense, and you can upgrade it using whetstones. The higher the tier, the cooler the aura effect looks on your character. This is one of the ways for high level characters to showboat, as their gear has this shine that doesn’t go unnoticed. That’s pretty cool, to be honest.

To move around you get a few mounts that are either armored to the core, or just plain fear-inducing. You’ll probably begin with a war goat or a warhorse, but you have other cool creatures such as a velociraptor, a Peco Peco that looks like a deadly Chocobo from the Final Fantasy series, a behemoth, or a massive griffon, among others. While these mounts don’t actively participate in combat, feeding them contributes to your overall battle power, and they also have star rankings to gain. Companions, on the other hand, aren’t afraid to get their hands dirty and stand by your side during battle. A cute fairy is probably going to be your first companion, but a fire maiden or the aptly named queen of pain are surely going to be more helpful.

In case you’re wondering about how you’ll manage to remain competitive against paying players - because that is a reality that we all must accept - well, there are ways to do so if you’re not in a rush. Besides the myriad of challenges and events that you get, in this game you also gain experience while offline. The AFK mode allows you to stay competitive even if you’re not online, since you’ll earn experience, gold, and an assortment of items without any worries.

You may come across a high tier gear that you were hoping to find, or a valuable item that is going to give you another nice character power boost. The way that your experience builds while offline is a guarantee that your power is always increasing and paves the way for clashes with foes that seemed too powerful just a while ago.

The AFK mode works even when you’re not… well, AFK, and you just need to collect the rewards whenever you feel like. You can get rewards for up to 12 hours and there’s a handy icon that gradually fills with riches to let you know how much loot and XP you have to collect. The bigger your power, the better the rewards, and it’s cool to check in the next day to see that your hero has gained a few experience levels and found a few good items for you. With the resources that you have earned, both offline and online, you can head over to the Auction House to start a thriving business. Since the game regularly drops rare items, you can sell the surplus to other players for a fee that you set. Besides, you can pick any item that you are looking for, including but not limited to crystals, mounts, companions, relics, and even divine dragons.

There are many solo PvE dungeons where you can gain experience, most of them offering you different kinds of rewards. The main story will take you through a preset route, but you can enter other dungeons whenever you want to, normally with a limited number of daily entries. You’ll invest through the usual mobs, often ending up with a huge boss that poses the real challenge. These dungeons are usually brief, and you can reap the rewards in less than five minutes or so. Dragon Storm Fantasy is fiercely addictive, aimed at those who love competition and teaming up with other players to become the best guild in the game. If you want to show your potential and take a shot at the top rankings, give it a go by downloading DSF on PC with LDPlayer. I’ll leave you today with some additional Dragon Storm Fantasy gameplay.

Contact us
Last article How to Play Might and Magic: Chess Royale on PC Next article Dragon Raja on PC: Best Emulator＆Settings (60FPS)