Pokémon Unite, a free-to-play multiplayer online battle arena (MOBA) video game, was created by TiMi Studio Group and distributed by The Pokémon Company for Android and iOS and Nintendo on the Nintendo Switch. Unlike most game genres, MOBA has quite a high learning curve and primarily relies on your skills.

This is not an exception in Pokémon Unite, as ranked matchups are far more exciting than regular games. You can obtain Aeos Tickets in-game by ranking up. This article will walk you through the ranked system in Pokémon Unite and tell you how to explore and win effectively in Ranked battles.

How to unlock Ranked matches in Pokémon Unite

Ranked matches are locked at the start when the player first joins Pokémon Unite. Luckily, gaining access to rated matches is a painless task. Reaching level 6 and holding at least 5 pokemon unity licenses are the major prerequisites for enabling ranked matches. It may be readily attained by just playing regular matches!

Throughout this period, players can earn Aeos coins, which can be used to acquire Pokémon. This method is primarily intended to provide players with the opportunity to learn about the game mechanics and Pokémon before diving into heated conflict.

Pokémon Unite has a total of 6 ranks, ranging from Beginner to Master. There are numerous classes in each of these ranks. The following is a list of ranks and their classes: 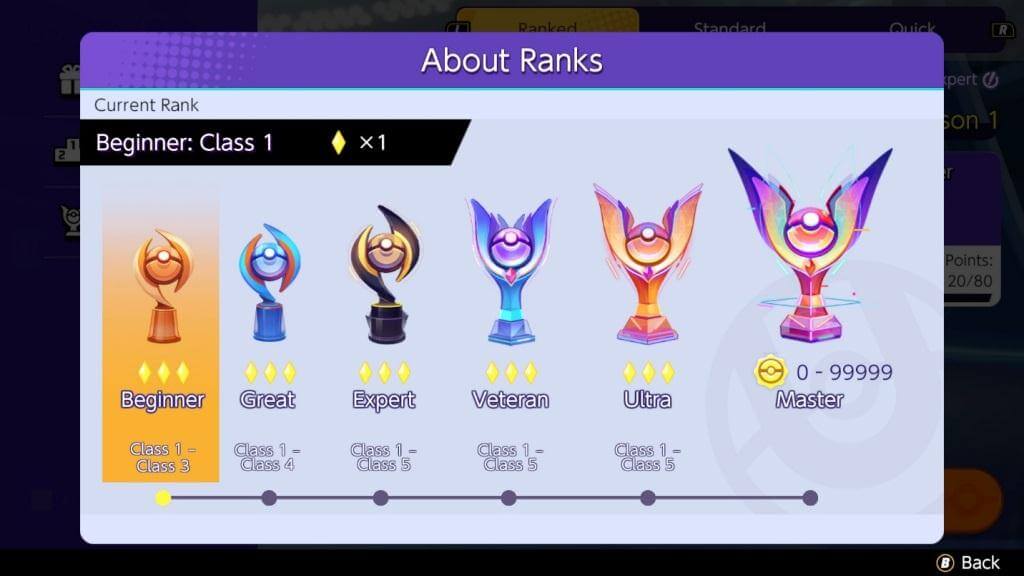 Players are rewarded depending on their greatest rank at the end of the season. The following is a list of the prizes at each rank:

By accomplishing a few tasks, one will also earn a seasonal prize, which is an outfit.

As a player, you must begin your adventure at the Beginner level and work your way up to the Master level. In Pokémon Unite, ranking up is a breeze. To rank up, one must win matches and earn victory points. Players in the Beginner tier will not lose-win points. Following that, players will begin to lose victory points for losing games. Listed below are 15 ideas and methods that can help a player rank up faster in Pokémon Unite and avoid losing points.

Held items are quite important in your gameplay, as these boost Pokémon's attack, special attacks, movement speed, and much more. When used correctly, this may dramatically enhance your gaming.

Battle items provide players with additional ability. Each player can only have one combat item in every game. It is critical to understand which combat equipment is appropriate for whatever situation and the best moment to utilize it. Battle items can provide significant benefits, particularly during intense conflicts. They will be very useful if used at the right moment.

It's vital to learn about the Pokémon you'll be playing with before diving into the game. To test out the Pokémon, go to the Practice area. This can assist in understanding your Pokémon. Studying the assaults, special attacks, and Unite movements will provide you with a huge advantage over your opponents.

Pokémon Unite relies heavily on communication, and players will receive short messages when their partners are facing different circumstances. It is usually a good idea to keep the colleague up to date on your movements. It is also necessary to respond to the calls of teammates. For improved conversation, consider utilizing voice chat. If voice chat is unavailable, fast chat messages should be used to deliver their message. This might not seem much, but it could make a significant impact.

While communication may impact, random squad mates often fail to reply appropriately, and you decide that it's better to play alone. But hey, gaming with pals can improve one's communication skills. This will eventually facilitate cooperation with them!

In Pokémon Unite, there are five different varieties of Pokémon:

Pokémons should be understood in terms of their strengths by the players. A defense Pokémon, for example, cannot be used to play attack. Defenders have great endurance, but their movement is sluggish. Players should always allow speedsters to carry balls to the goal since they have faster mobility and score points faster. Because an attacker lacks defense and endurance, he must be paired with another defender/all-rounder. It is preferable to team up with a Defender or an AllRounder.

The majority of the players are unconcerned about the squad structure. Payers favor an Attacker or a Speedster. They are prone to focusing solely on attack and ignoring defense. An effective party should have an Attacker, a Speedster, an AllRounder, Defenders, and Supporters in an appropriate combination. Defenders and Supporters are critical members of any team during a Unite fight.

If a Defender or Supporter slot becomes available, the player should take it. Not everyone can be a striker or an attacker, much like in football. Defenders are crucial because they may prevent the opposing striker from scoring. Defenders and Supports are also important in Pokémon Unite. They not only prevent opponents from scoring goals, but they also help allies by blocking enemies and assisting fellow players in collecting the balls.

Lanes serve as the pathways that link both sides together. It is critical to select a lane for your Pokémon. In the Pokémon Unite game, there are three lanes. 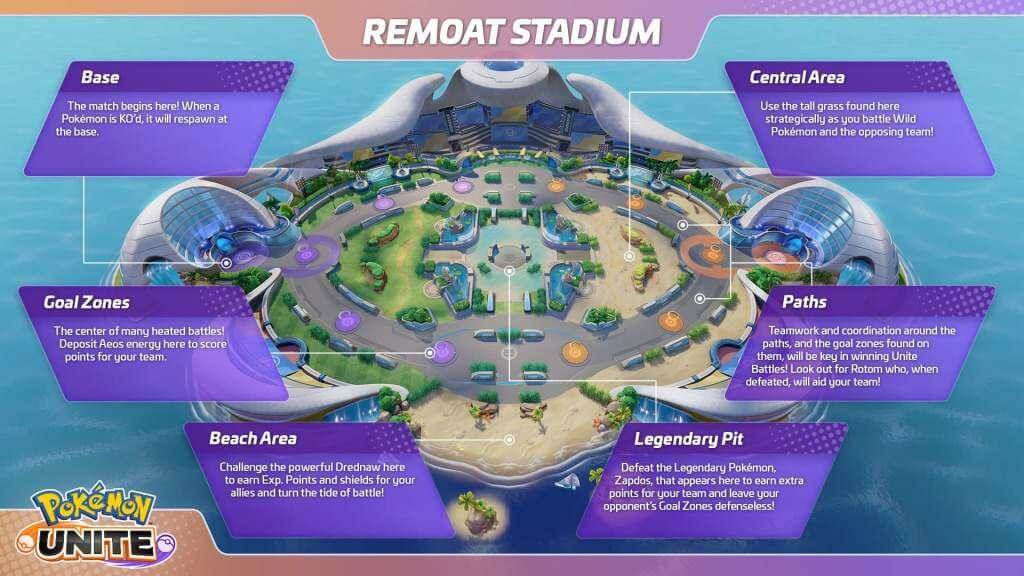 Each team has two goals and several wild Pokémon in the top lane. Rotem, a rare wild Pokémon that spawns in the center of the Top Lane, may also be found in the Top Lane. When a Rotem is seized, the opponent's goal is weakened, and 20 goals are scored. If you're a Speedster, Attacker, or Defender, Top Lane is a great option since it allows you to score more goals, particularly with Rotem.

Compared to the other MOBA games, Pokémon on Unite's center lane is a swamp. In the center lane, there are no goals - - it is quite calm and easy-going throughout most of the game. It has various wild Pokémon as well as Bouffalant and Ludicolo. A unique boss called Zapdos will spawn during the last two minutes of the game in the center of Central Lane. For 30 seconds, the opponent's goal is rendered susceptible. As a result of their mobility, Speedsters and All-Rounders enjoy Central Lane very much.

Bottom Lane contains two goals and a few wild Pokémon for each squad. Drednaw, a rare wild pokemon that spawns in the center of the Bottom Lane, may also be found in the Bottom Lane. Players receive a temporary shield for the entire squad, as well as some experience points after beating Drednaw. Attackers, Supporters, and Speedsters do best in the Bottom Lane.

Drednaw is a rare wild Pokémon that appears in the center of the bottom lane at the 7-minute mark. After beating Drednaw, the whole squad receives a shield and experience to level up. Drednaw is a significant player who alters the game. It is simpler to push opponents and secure goals with the shield. Furthermore, it grants experience points to the entire team, allowing the Pokémon to level up.

Drednaw can assist players in quickly destroying the lower goals. However, while battling alongside the Drednaw, keep an eye out for the other squad. It makes no difference how much damage your team does; whoever takes the most damage receives the experience and the shield. In the last two minutes, Drednaw despawns.

Rotem is a rare wild Pokémon that appears in the center of the top lane. Right around the 7-minute mark, Rotem spawns near the Drednaw. After beating, Rotem undermines the opponent's goal and rushes to the nearest goal, scoring 20 goals. It is critical to know when to beat Rotem — it is less significant than Drednaw, providing experience to the entire squad, which is more valuable than 20 goals.

Attention alerts are essential in Pokémon Unite. The majority of people overlook this and fail to realize the message. The following are the key messages from the attention alert.

When the game's last two minutes begin, Zapdos appears in the central lane as a boss Pokémon. Being a game-changer upon defeat, it gains points and the opportunity to score a goal immediately. This might make it easier for the team to eliminate opposing objectives.

As with Rotem and Drednaw, whichever side receives the last blow receives the ability. As a result, during battling, players must be wary of the opposing team. It is critical to go to the middle lane a few seconds before Zapdos appears. This is done so that any opponents may be cleared out and secured before they spawn. Whether a team is 20 points or 100 points behind, beating the Zapdos will secure a win.

The final two minutes of the game are the most important. The point is virtually doubled for each secured goal in the last two minutes. It is also the time when Zapdos spawns. You'd almost certainly win if you defeated Zapdos. Therefore, the primary action occurs in the center lane during the last 2 minutes.

Bouffalant and Ludicolo are extremely rare wild Pokémon that may be found in the central lane. When defeated, Bouffalant grants an orange bonus; when struck, this perk helps slow down the adversary. On the other hand, Ludicolo grants a purple boost when defeated, which raises the damage delta against opponents with low health.

They spawn with other wild Pokémon at the start of the game. Beating them at the outset of the game provides you an advantage over your opponent. Most significantly, one must beat them seconds before the Zapdos appears. This can provide players with a significant edge over their opponents.

Once you have enough performance points, you will be able to advance to the next rank. To get benefits in the Ranked System, the following objectives must be met: