KonoSuba Fantastic Days is the bewest RPG coming to our gaming world with Nexon, and this one is all along with the anime. The game has been associated with the KonoSuba anime series, and you, as a brave traveler, will find joy, laughter, and challenges throughout the story. 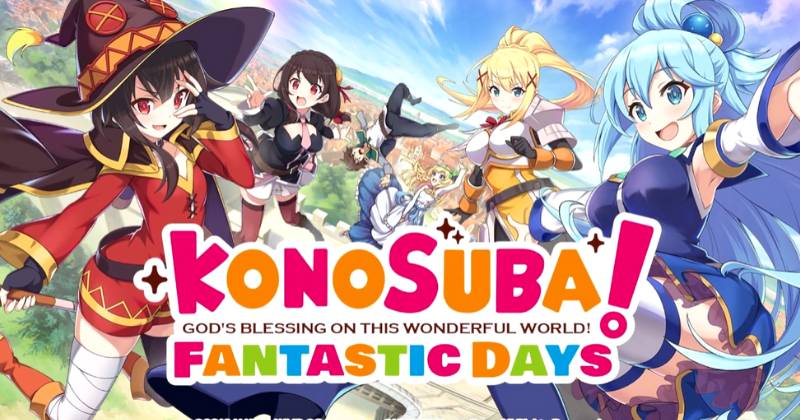 The game originally took the hit characters to form the anime series as Megumin, Aqua, Kazuma, and Darkness. You have to deal with the excellent story held by the game with these characters. You will form teams and unleash many skills within the battles. So many vital scenes have been taken from the main anime story, and this one is indeed a fantastic yet adventurous anime RPG for our game lovers.

In here with each character, players take multiple abilities as an adventurer, and they have to be taken from the Adventurer card. We called them skills, and what are these skills are actually, and what powers do they hold to the players? This is the ultimate guide for the skills on KonoSuba Fantastic Days. Download KonoSuba Fantastic Days on PC, and let's take a look at these skills.

Skills can be multiple abilities that a player is learning through spending his skills points on the empty skills. These empty skills are displayed on the Adventure Card of a player, and it is believed that these skills are not o for the monster's extermination. They are forming that bedrock of the society which is laying upon.

You will see many skills at KonoSuba Fantastic days, and each of them has a variety of powers from one to another from own. Skills will be essential in mastering some of the aspects in the game of Fantasy World, and the broad specification on these skills are allowing for several usages on everyday merit. Those are creating some of the intricate artworks, or they will help you to reveal the secrets held by the arcane as well.

Skills are helping a player with different methods like steal items or increasing the character attacking power. You can train every skill through a repeated usage in the game. Use of the magic will be included under the skills, so when you are casting it, it will be called magic rather than identifying it as a skill.

The class adventures are the only class capable of learning every skill in the game but know that this class is coming with their won costs to the game. You may see it as a jack on all the trades due to its unique features, but know that it is taking more skill points as a great deal to learn those abilities which are outside of the general category.

Skills must be taught or directly shown by another who owns them while it is less effective than the original form. As a result of this, many of the skills are ridiculing the class and making the ones insufficient and weak who are being a part of it. So when it is only a level up from one, it will be enough. However, they are gaining the ability of choosing a certain type of advancement when they are meeting with a suitable base stat on their jobs.

Every set of the advanced class will have their own features and their won locked skills. These are known to be an individual for a certain amount for picking based on the proficiency. And the aptitude it has with that class. Suppose someone chooses a thief. So they are learning how they should cast the Steal off the bat but not Bind.

Opening up access for a new skill is requiring so much researches and high exploration over a class. Players have to understand their class ultimately. Most of the time, we will select the advanced classes because they are granting a large number of bonus points on skills, and they will reduce the cost for a skill that comes with an original price making it free. You can reach into Skill points by going into the leveling up or by having a drinking potions of expensive skill up. Skill point costs are affected by the affinity of a user within a specific skill. There are no methods to unlearn skills and to refund those skill points. So it is recommended to save up the skill points and learn the most effective skills as quickly as possible. You can do it by avoiding those beginner skills or learning skills from the other classes.

Adventurers have to learn some of the beginner skills here. If not, they will not be able to fight, join a party or make a level up as well. As you can imagine, these are making level-ups on skill point potions pr some other safest ways for a level up like the onion duck, which is known to be expensive.

Users of Steal are Chris and Kazuma. Here it will steal the items within an area where a user gets into the random. The better loot increase chances are depending on the user's Luck.

Kazuma in Chris are the users of this, and this skill allows its users to sense the hostiles by using pings "Radar-like."

Kazuma and Chris are the users of this, reducing the scent and visibility of the user. It is showcasing the activation when a user is disappearing like a shadow.

Chris and Kazuma are the users of this skill, and it is summoning ropes for enemy ties.

Chris is the user in here, and it is preventing the enemies by using their skills

Chris in here is detecting the treasures

Lan, Chris, and Kazuma in here will allow making the quickest getaway

Chris in here is creating traps by using wires

Chris and the Kazuma are the users here, and they are detecting the traps by this skill. And also, the success of these two depends on agility and Luck.

Kazuma and Chris will be the users here, and this skill is disarming the traps. The success of this skill depends on agility and Luck.

Chris is the user of this skill, and it is allowing a person to pick the locks Users of the Bow are Keith and the Kazuma, and this skill is allowing them to use Bow of weapons

Keith and the Kazuma are users of this skill. And they are firing an arrow from the Crossbow or a Bow. The damage happening here will be based on the Dex, while Accuracy is based on the Luck.

Kazuma and Keith are the users of this skill, allowing them to see far away from a distance. And also, this skill is giving its users night vision.

Darkness is the user of this skill, and it is attracting the monster attention

The user of this skill is Darkness, and this skill is allowing its user to carry a sword of two-handed, or it will carry any other heavy weapon

The user of this skill is Darkness, and it is resisting the physical damage

The user of this skill will be Darkness, and this is preventing the magic from taking the effect Satou and the Kazuma will be the users of this skill, and they will raise the proficiency along with one-handed swords by this. Kazuma and Satou will be users of this skill, allowing the users to dodge any kind of attack automatically. The activation of the skill depends on the Luck of a user.

Wiz and the Kazuma are users of this skill, and it is absorbing and transferring the stamina. Not only the stamina, but it also does the same for strength and the vitality from several targets through a hand contact by physical

Wiz is the user of this skill, and it is giving a debilitating debuff on the targets with having a physical touch. There is a random debuff type in here. Aqua is the user of this skill, and it is spraying water fountains from the fans of the Japanese war.

Again is the Aqua as a user from this skill, and it is allowing the allies to be able on mimicking voices Kazuma will be the user for this skill, and this is giving ability the forge and fixing the weapons

This skill goes with Kazuma as a user, and while being undetected and unseen, this skill gives a movement chance of one enemy shooting from behind.

If you need earning mentioned heroes, you can try the fastest rerolling method by LDPlayer. Go and check our Reroll Guide from here. So these are the skills that you will see on KonoSuba Fantastic Days, and know that each comes under different players. They are extraordinary abilities that you can use over the game, and by having this, you will gain some progress in the game.