Lust is the middle name of King's Throne: Game of Lust, an Empire simulation MMORPG with great potential, where you rule your kingdom and experience the medieval promiscuous royal life and live it to the fullest in Lust. In King’s throne, you have exciting adventures, epic battles, and glorious victories, where you recruit powerful heroes and companions to make your very own Knights of the round table. 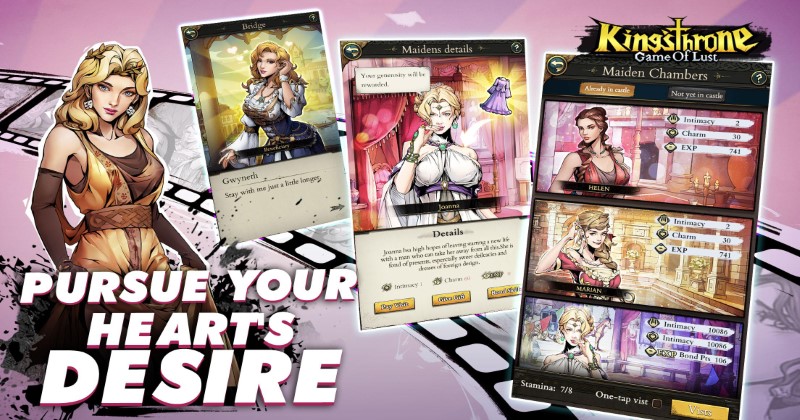 The moment you have been crowned the King in this game, you have Magna Carta to court any maiden and sire any number of children. It’s all for the glory of the Empire. All the maidens are ready to have the opportunity to be sired by you and join you also during war times if needed. These are not just the damsels in distress but can become worthy warriors other than being a bit naughty sometimes. 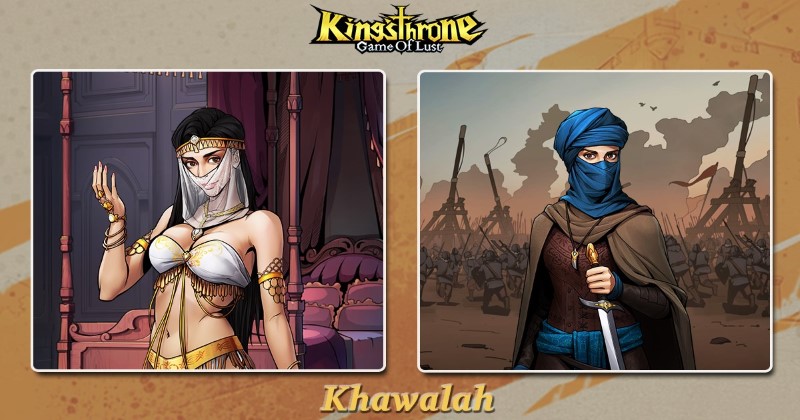 Maidens are having an essential role in forging your Kingdom. Even though they might not provide boosts as much as their male counterparts, they still are instrumental in ensuring your Dynasty's progression and protecting your castles. Therefore, you'll need to take our tips to heart and experiment thoroughly with your maidens to gain the Intimacy they deserve.

You can download King’s Throne on PC so that you can reduce fatigue when playing on your mobile and enjoy the lustful maidens on bigger screens.

You do not marry in this game; remember that. You improve your power and can welcome new maidens to your castle. The game delivers you the first maiden Marian as soon as you finish the tutorial, sort of a rite of passage. That's not it; apparently, the game thought one rite of passage wasn't enough as it delivers you Isabella and Margarate soon afterward. Nonetheless, you have to work on getting more maidens to your castle, and we are here to tell you the easy way.

The first way is to increase the power of your castle; the higher the power, the more powerful maidens will arrive. The first one of these is Carmilla, who comes when you've reached 100,000, while Vivienne comes at 200,000 and Titania at 500,000. Theodora is by far the most demanding of these, coming at 1,000,000. 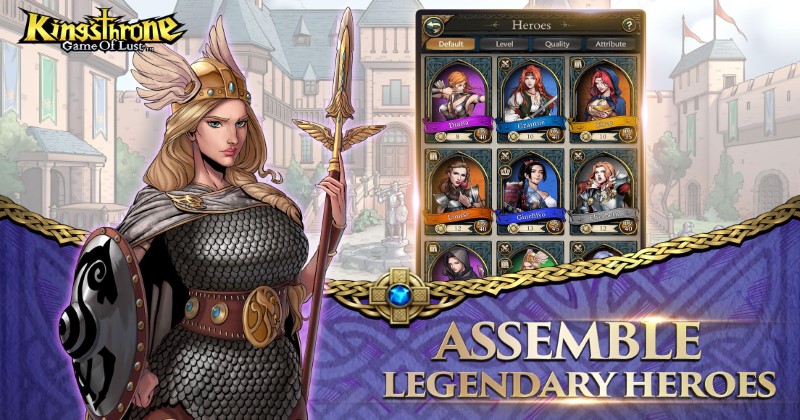 The second way is to pay real money to get VIP levels to get the better maidens; of course, money is needed to get the real deal. The maidens gotten this way with their VIP level requirements are as below: 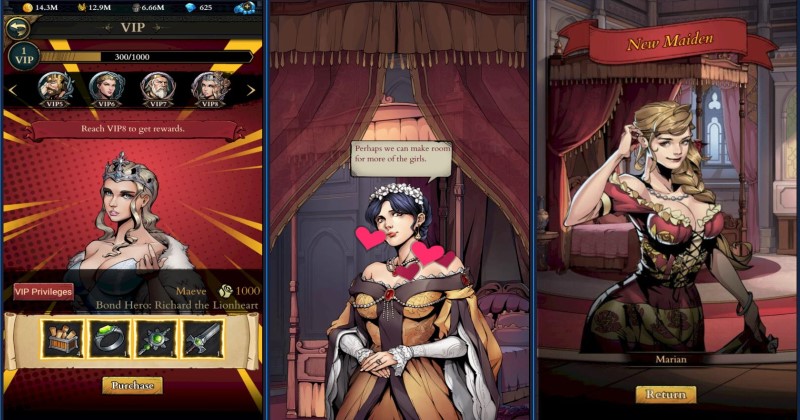 The third and final way to get more maidens into your hard-knock life is through the events in the game called Procession events. This event is unlocked early in the game, and you can easily stack up to 4 processions at one time. The probability of a maiden to come out of such procession is based on your current luck, being from 0-100.

The higher the luck stat, the more likely to meet a maiden. The procession events require you to do a few meetings before the maiden can decide to join you in the castle.

Each maiden has three important stats, which affect the siring of princes and their potential and how powerful they can become when all grown up. We'll discuss each in some detail. 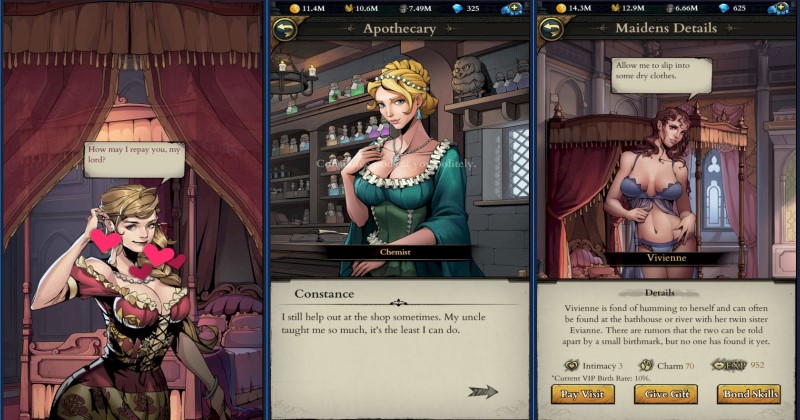 Intimacy directly with your Highness affects the future stats of your child together. The Intimacy with the maidens can be increased with regular visits to the maidens, which can be done two ways. First is at random called "Random Visits," and they don't cost any diamonds, but they yield less profitable results. The second method is to visit spending Diamonds and give her gifts which can increase the stats with variability but better than "Random Visit." 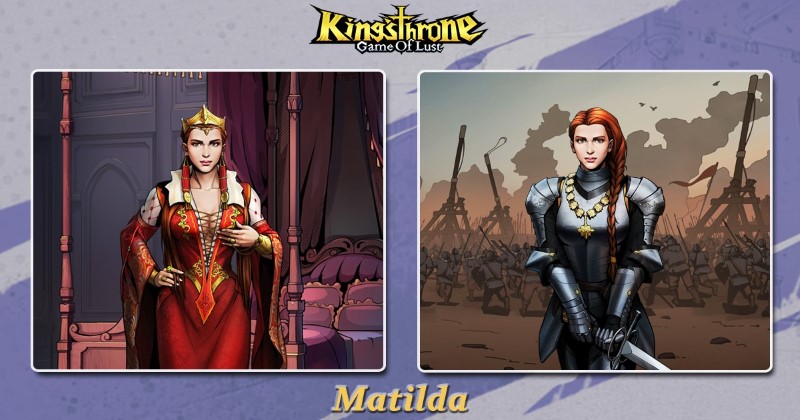 Gifts can also increase Intimacy via like Precious Necklace gives +1 while Priceless Earrings give +2.

This stat is concerned with how much XP she gains when you visit her, random or not. Gifts can increase charm from giving Perfume to give +1, and Ball Gowns provide you with +2 charms for your maiden.

Those maidens whom you have allowed to reside in your chambers or are in one of your castles can bond with one of your heroes. Boned heroes get bonuses for their skills and output the higher the level (Intimacy etc.) of your maiden. You can increase this stat by paying her visits and giving her XP this way. 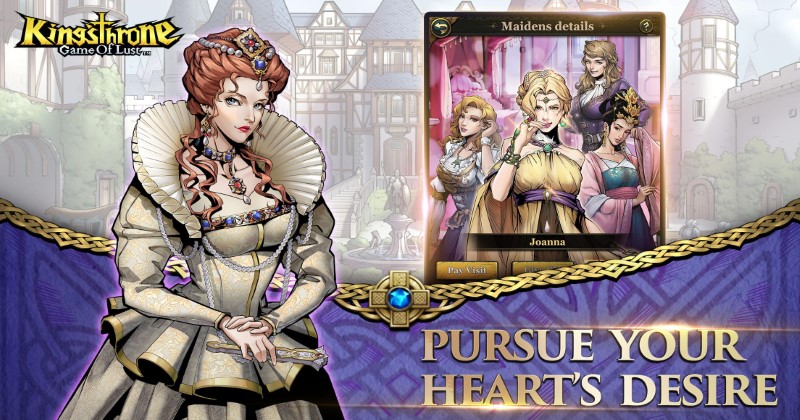 Marcello, for example, is the hero you get initially in the game. He manages the Kingdom's finances, is allowed to bond with Isabella, and increases Marcello's bonded skill depending on her XP. At low Intimacy of 10, she can boost his financial power by a 100 per level, while if you get it to a near max of 200, then Marcello gets sort of a paragon getting 0.5% extra fortune per level. This exponentially increases the amount of gold that Mr. Marcello can produce.

Now that we have understood how essential maidens are to the Kingdom and your eyes let's delve further into another mechanic in the game that also benefits from your Intimacy with the maidens and how experienced as you'll sire many children in King’s Throne who contribute to the Levies you take benefit from and increase the overall power of your Kingdom.

The only issue with the child mechanic here is that the children's stats and future power are scaled off of what her mother's stat was at the time of conception, which involves a lot of randomnesses. 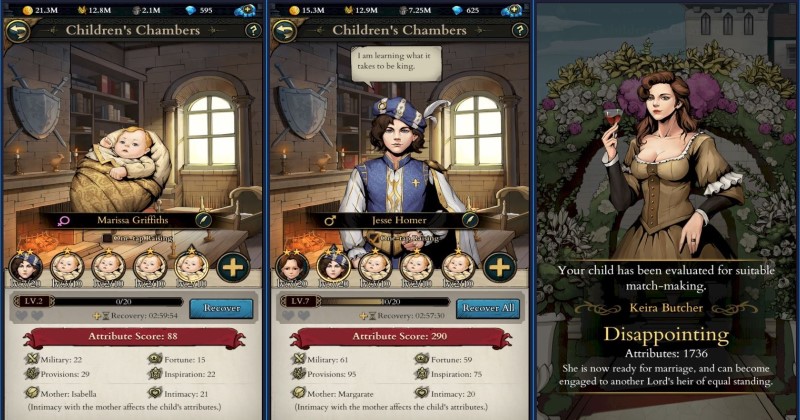 Siring a prince is done in the bed chambers and can happen with any of the maidens you have at that time. The visit requires 1 stamina each time, while you can store up to 4 at a time. You can spend all to a single visit to gain more XP and levels for your maidens, but which maiden you go to is completely random.

Due to this randomness, you are forced to evenly or somewhat evenly distribute gifts among them as if you spend more on maiden A, and the randomness marks B to sire, the child born will have lower stats overall if he was born with maiden A.

To remove the random factor and visit your intended maiden, you have to pay 10 Diamond per intimacy point, but it gets expensive for a single visit of such kind. If, for example, Isabella has around 20 Intimacy, you have to pay 200 Diamonds for that single visit, and that's not too F2P friendly.

Intimacy value on Potential of the Child:

The potential of your future heir depends on the intimacy level of the maiden you sired within the bed chambers. The potential can lay between Ordinary to Remarkable to Best, and initially, most will be born Ordinary as that's how low you'll be in the beginning. The level of maiden's Intimacy must be at least 20 for you to have a shot at producing a decent child and sometimes with Great potential.

After that, the more Intimacy you have with your maiden, the higher the chance your ward will have better to best stats when they eventually grow up. 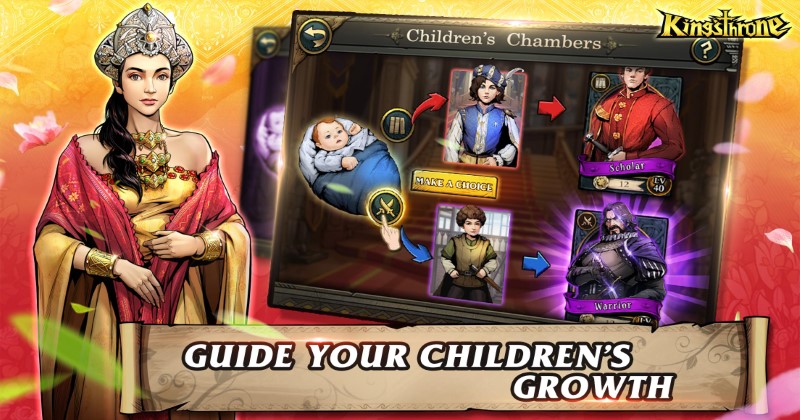 You can access your children via the royal chambers and level them up or grow them up, which is done by spending 20 points on each level. This requires resources and nothing else affects their stats when leveling up. Normal children or 1* ones can only level up to 10 and have lower stats but grows up within the 10 levels, while great children or 2* ones can level up to 20 while also getting higher stats per level.

While they require 20 points per level in the initial levels like the 1* ones, the next 10 levels require 30 points each level for 2* children, which becomes a hassle as it starts taking too long, and you resort to energy bottles to speed things up.

Another method requires you to spend 1,900 diamonds to unlock five chambers, and because of this, you can educate all of your children with a single tap from the available energy.

After you’ve educated your kids and reached adulthood, they can be “evaluated” for matchmaking. Once the matchmaking is done, their stats can only be modified marriage. Matchmaking is done in the Royal Quarters, where a matchmaker helps your progeny find the right partner for them.

The game makes sure that your progeny is married to heirs of the same potential, and they won't be married off to some “feeble-minded” prince/princess, which will double the contribution of your child to your Kingdom. The marriage proposal and ceremony will need to be announced by spending either some gems or a form of dowry, such as the Silver Dowry.

The married couple will both benefit your Kingdom indefinitely by adding to your overall power and by helping you collect more resources.

King’s Throne: Game of Lust plays out as a story told in the form of comics, and what better way to read and play it whilst using a gamepad or controller on your PC. LDPlayer provides you with the feature to do that by giving you options to use your controller on it.

LDPlayer has other great features like giving you improved graphics and frame rates which enhances your gameplay and lets you look at the game’s bountiful images with higher clarity.

The emulator also allows you to reach the desired part of the game quickly by utilizing both the in-built keyboard mapping feature to bind keys and use a macro in such situations quickly.

While initially seeming a promiscuous game with the scantily clothed maidens, this game has more depth than it showed. The Empire management mechanics and inclusion of maidens as essential to the progression of your legacy is more complex than it initially imparted. King's Throne: Game of Lust will keep you glued and addicted to your screen, not for another sexy-looking maiden but due to the fun you'll be having while managing the affairs.