As Genshin Impact Version 2.3 draws to a close, players eagerly anticipate the forthcoming update, including all-new characters. The return of the iconic Latern Rite event comes the rerun of some old characters from Liyue, such as Zhongli, Xiao, and Ganyu. But today, we're not going to focus on them; instead, we will look at how to build the new character, Shenhe, and how she will be viable in your team.

Shenhe is the new 5-star character being added to the game. She is a Cryo Vision holder who uses Polearm as the weapon of her choice. Shenhe is descended from an exorcist clan's branch family. Cloud Retainer accepted her as a disciple for a variety of reasons. Cloud Retainer is a knowledgeable and chatty master to Shenhe.

Shenhe stands out among the mortals who Cloud Retainer has trained. Living among adepti as a human is difficult. Still, Shenhe possesses a unique constitution, a very strong will, and a tremendous skill for adepti arts, all of which have earned her the adepti's respect.

Long years of practice, combined with a habit of eating heavenly herbs and drinking mountain dew, have distanced her from worldly life to the point where she is now recognized as a strange white-haired Adeptus. Shenhe has deemed a supporting character similar to Gorou, supporting mono elemental teams in terms of gameplay. As for the Ascension Materials, you'll need these set of items:

As for the Talent Materials, you'll need these set of items: 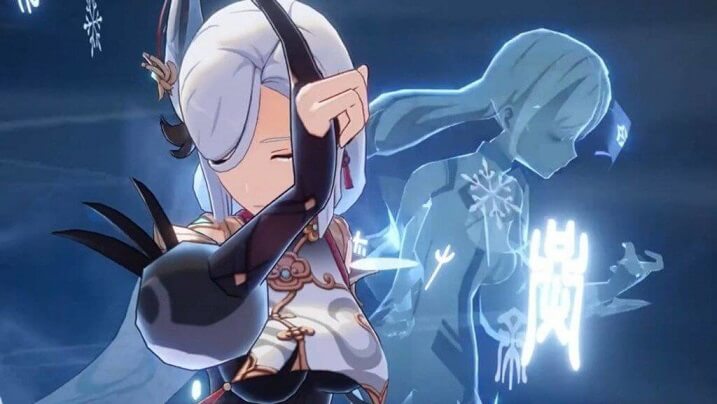 All demons will be exorcised by the frosted dew, which is silvery and dense. The Icy Quill effect is applied to all nearby party members, and it deals with Cryo DMG in varied ways depending on whether it is pressed or held.

The Talisman Spirit's power is released, letting it travel freely on this plane to deal AoECryo DMG. The Talisman Spirit then constructs a field around itself that reduces opponents' Cryo RES and Physical RES. It also deals Cryo DMG to opponents on the field regularly. 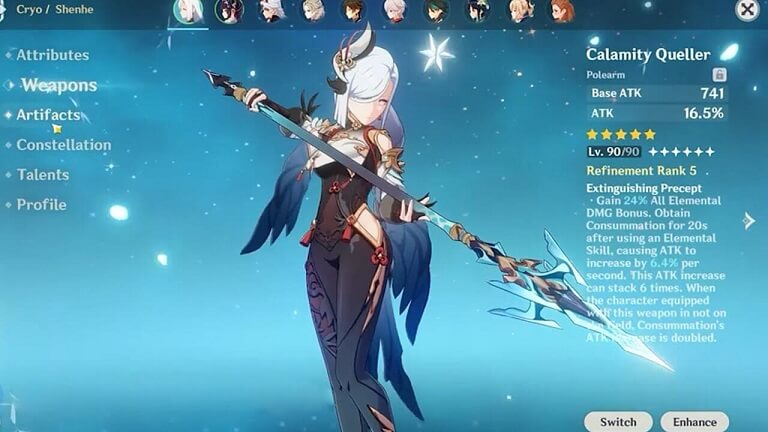 Her Bis Weapon, "Calamity Queller," will be available for players to obtain through the standard banner running alongside Shenhe's banner. It has a base attack of 49 with an attack% sub-stat of 3.6%. Its passive will help a lot with building a cryo-support Shenhe. The other 5-star weapons you can go for are "Engulfing Lightning" and "Skyward Spine."

As for the 4-star weapons, there are a few that you can use: "The Catch," "Favonius Lance," and "Lithic Spear" would be very effective for her. 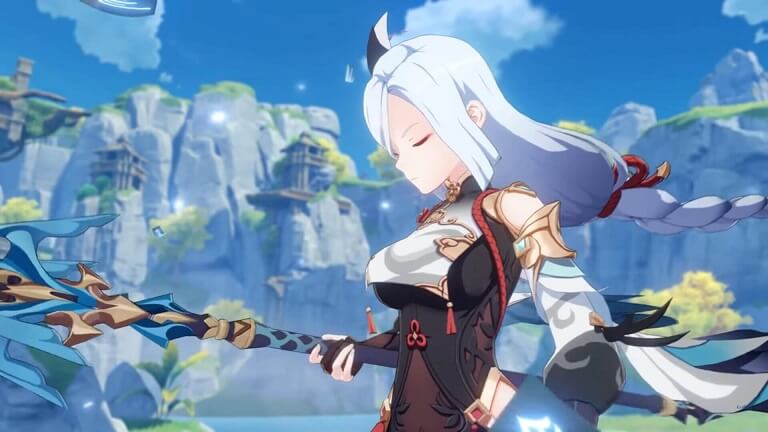 Shenhe didn't have any specific artifacts for her, unlike Itto, but there are several sets in the game that you may use for her. One of the sets includes a 2-piece Blizzard Strayer and a 2-piece Noblesse Oblige.

The other set that you can go for is 2-piece Gladiator's Finale and 2-piece Shimenawa's Reminiscence.

In terms of team composition, she's ideal for a mono-cryo team, but if you don't have many Cryo characters, you can always go with one or two, along with a healer or a sub-DPS.

Shenhe has one of the more elegant animations I have seen in the game and looks pretty. Apart from the looks, she will be viable in your team. If you saved up for her and plan to summon, may the Gacha Gods be with you! Genshin Impact 2.4 Update: Everything you need to know