Quickly approaching and filled with anticipation and rewards, Fate/Grand Order NA’s 5th anniversary is shaping up to be quite a big event for North America servers. Like its Japan server counterpart 2 years prior, NA is getting all the benefits and rewards from this anniversary, with a ton of rewards, gacha currencies and a BRAND NEW LIMITED TIME GACHA SSR SERVANT - Caster Artoria.

In this guide, we will be looking at what news you can expect from Fate/Grand Order’s 5th anniversary event and how you can maximize the rewards you can get. In addition, we will also look into the power of the new Limited Gacha Character - Caster Artoria and find out just how powerful she is and whether she is worth your saint quartz.

NOTE that some of the screenshots will be taken from the Japan Server’s 5th anniversary announcement. However, the contents coming to the North America server will remain the same. Fate/Grand Order’s 5th anniversary means that there will be a whole lot of rewards for all players, even new players, especially with the new players assistance campaign. Therefore, if you want to start Fate/Grand Order, this is the best time for you to start by playing the game on LDPlayer.

Not only does LDPlayer allow for smooth gameplay on high graphics and high FPS - up to 120 FPS- it also allows for players to reroll with ease using its multi-instances function. These functions ensure that you will have the best gaming experience and the best beginning to Fate/Grand Order in preparation for the 5th anniversary event.

During the 7 days of the Anniversary Event, by login everyday, you will get yourself a whole bunch of rewards. There’s 2 types of Login Rewards Bonuses: Consecutive Login Bonus (7 days) and Cumulative Login Bonus (4 days). 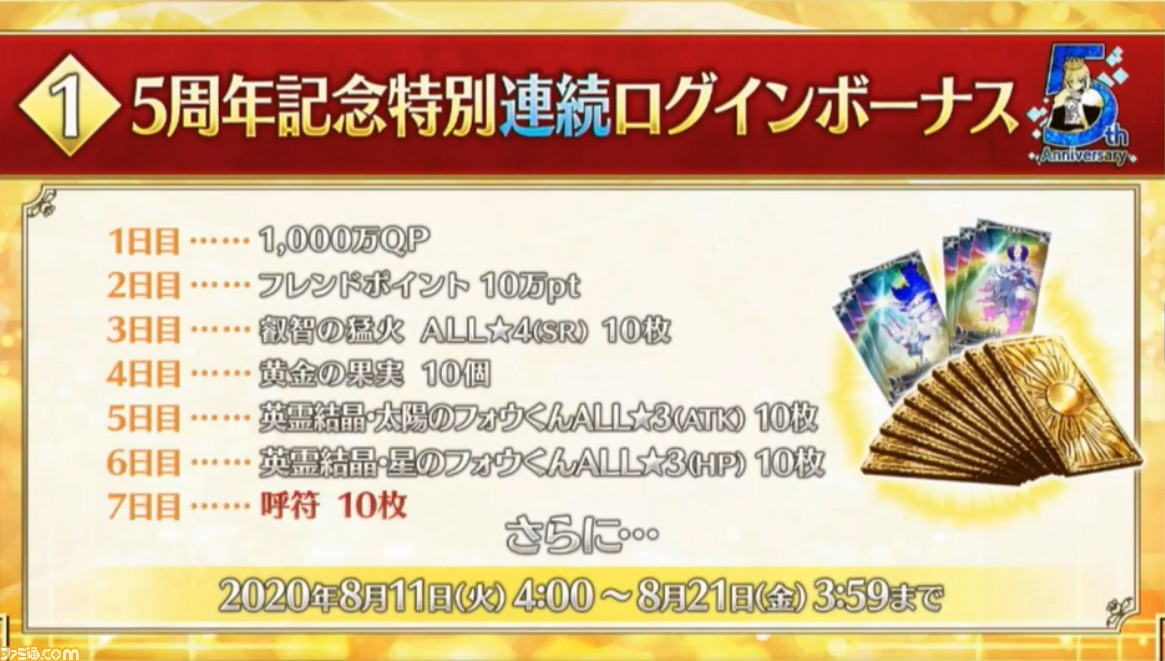 The Rewards from the Consecutive Login Bonus are:

For the Consecutive Login Bonus, you HAVE TO LOG IN EVERYDAY in order to get all 7 rewards. If you forget to login 1 day during the streak, you will LOSE the remaining rewards.

The Rewards for the Cumulative Login Bonus are:

For the Cumulative Login Bonus, you only have to login a total of 4 days during the Event and you will get all 4 rewards.

For the duration of the entire anniversary, all Daily Quests will be opened and the cost of entering these stages will be cut in half. Therefore, this is the perfect time for all players to stock up on EXPs and Qps to use in the future.

With this Anniversary Update, the 2nd Archive storage space will now be able to be increased to up to 800 slots each for servants and CEs. You can increase the storage capacity by spending Mana Prisms and this feature will last forever. 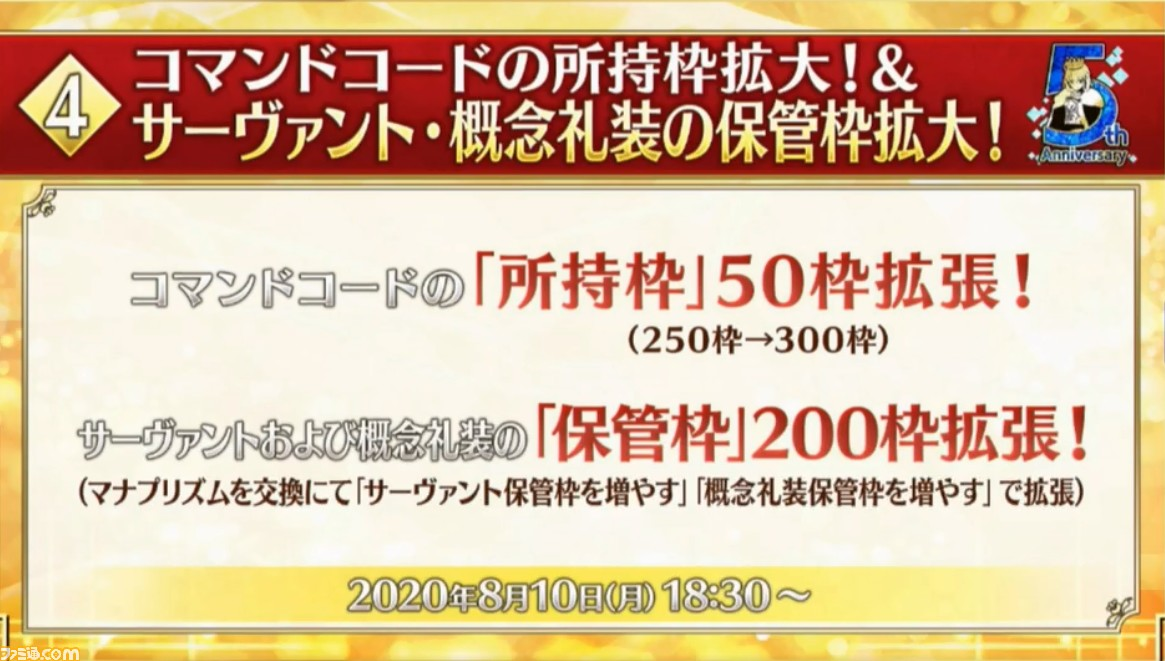 After the Anniversary Update, there will be extra missions added to the Master Missions tab, in addition to changes to the Daily Missions system.

From this update, Daily Missions requirement will be changed to: “finish stages 1-2-3 times” and rewards up to 30 Mana Prisms daily when finishing all 3 daily missions.

New Extra Missions will also be added to the Master Mission tab and will remain permanent. These missions require players to finish a certain amount of Servant Strengthening Quests, Servant Interludes and Story Free Quests with each mission cleared rewarding 10 Saint Quartz each.

In addition to the changes to the Master Missions system, there will also be event exclusive and time sensitive master missions added during the event period. Clearing these missions will grant all players 3 Summoning Tickets as a reward.

From this update onwards, the Command Codes system introduced during the 4th Anniversary will receive slight tweaks in order to make it easier for players to utilize them in combat.

Instead of being used to replace existing Command Codes, now Code Openers will be used to reseal Command Codes Slots, refunding the materials used to unlock them and the corresponding Qps amount.

In addition, Command Codes will now be able to be easily swapped around instead of having to use the Code Opener to swap them. 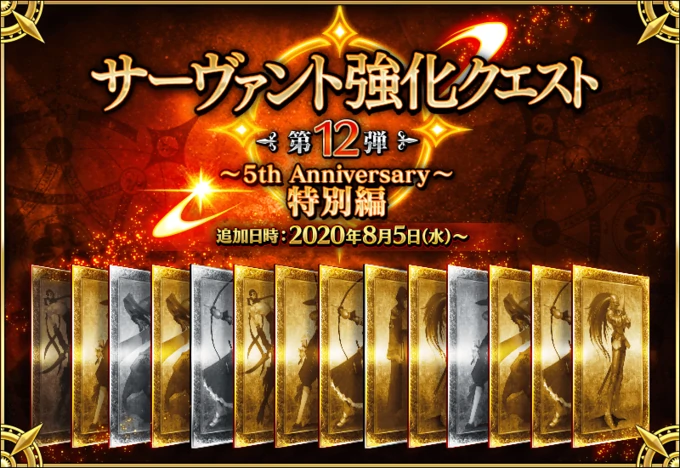 14 Strengthening Quests will be added to the game during this Anniversary. These quests will upgrade the servants’ skills or Noble Phantasms, allowing them to become stronger.

From this Anniversary Event point onwards, Each time you clear an arrow in the main story, you will be rewarded with 1 saint quartz fragment. This applies to all main quests cleared and those you haven’t cleared yet. 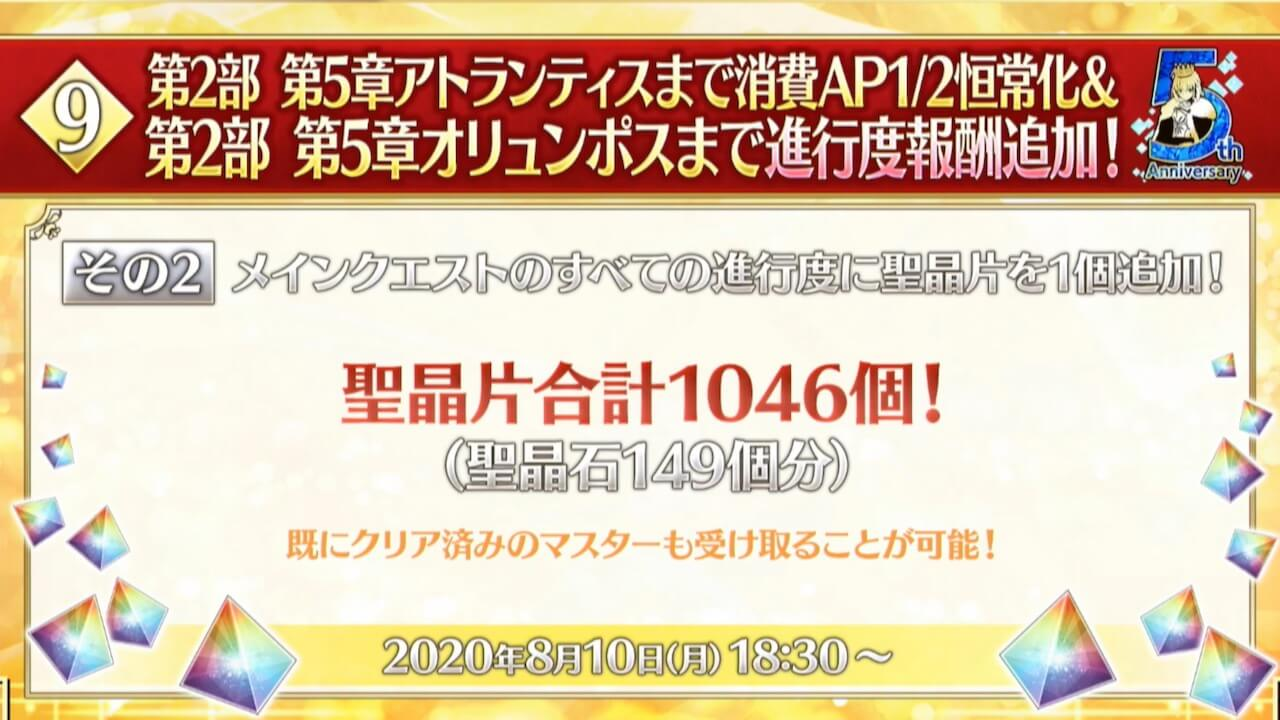 Through this reward system, you can get up to 1046 saint quartz fragments, equivalent to 150 saint quartz rewarded if you have finished all the current main story quests available.

Like other Anniversaries before, this Anniversary brings to all players the Special Exclusive Lucky Bag SSR Guaranteed Banner and a Special Rate Up Gacha Featuring the Event Exclusive - Caster Artoria.

In order to roll on this banner, you need to spend 15 PAID SAINT QUARTZ and you will be granted 11 summonings with 1 Guaranteed Limited Time SSR Servant depending on the pool selection. This time around, the summoning pools will be divided into 5 time banners, representing the 5 years of FGO and you can only pick 1 of these banners to summon on. 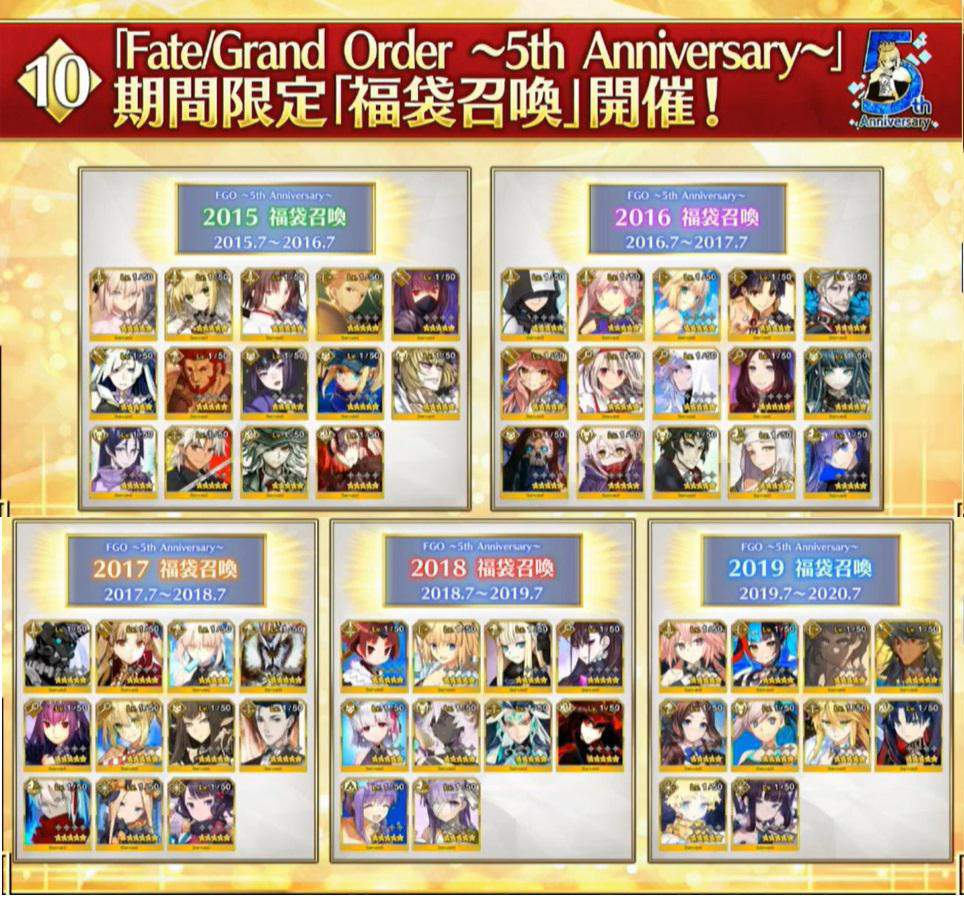 The Special Rate Up banner for Caster Artoria will also be available at the time of the Anniversary, alongside the Lucky Bag Special Summon and feature the all powerful Caster Artoria - 1 of the servants that rocks the very meta of the game. However, we will discuss her power and her banner in another article coming once the North America server announces official information regarding the 5th Anniversary. Fate/Grand Order Free SSR Ticket - Everything You Need to Know