Finally released worldwide, after a long beta testing period (nearly 1 year!) Eroica is ready for being played by anyone! During a normal day, the protagonist was busy playing a Dungeons & Dragons like futuristic game, but at some point, a mysterious force made the main characters being teleported into a fantasy world. A young Princess will wake up our protagonist, explaining him that he's just near a camp of “Dargons”, malevolent creatures that will attack him! With the help of a strange owl that can become a shield for our hero, he will try to understand how to go back into his own world!

Eroica is a Turn-Based Gacha RPG, similar to other titles like Epic Seven, where you command a squad of four members and fight different orders of monsters. The game features different classes (Slasher, Mage, Shadow, Shooter and Healer) and different Elements (Fire > Earth > Water > Fire | Light = Dark). Also a lot of different characters from 1 to 3 stars, with different peculiar abilities like Controllers, Buffer, Debuffer, Burst Damage Dealer or Damage over Time Characters. The game also both features PvE Content like Main Story, Explorations, Puzzles to solve etc, while also PvP and more! 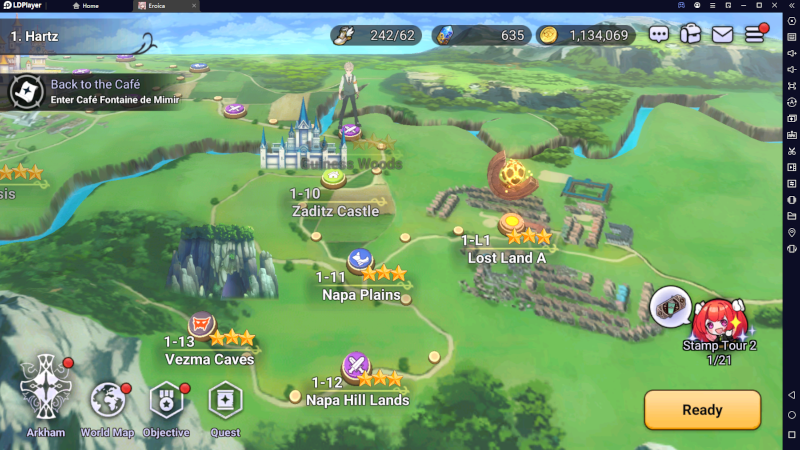 The “Main Story” in Eroica lets you explore different Chapters, with a map exploration system for some stages, and for the world itself. The stages are different based on the icons:

Also in the Story you can drop different goodies from the fighting stages, like equip, exp for your characters and consumables for crafting. Remember also that your team, after each stage, won’t be healed to max hp, so you have to pay gold or wait to make your team fully HP again. You can also “Repeat” stages you already did or “Sweep” them with sweep tickets to instantly get the rewards. 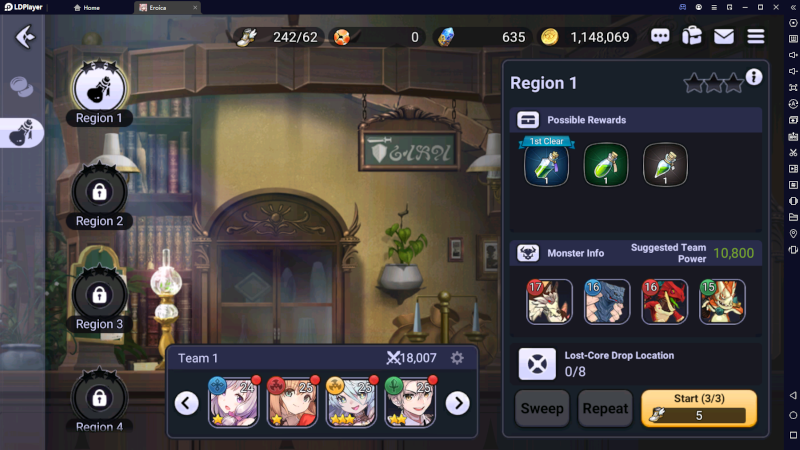 The “Guild Request” is not the same as the name suggests. It’s not a “Guild” related content, but it’s just a normal dungeon for improving your character (Guild Request: Exp Potion) and your finances (Guild Request: Gold). Three times a day, for both options, you can collect Exp potions and Golds. Remember to do it daily! You can both Repeat / Sweep (if you completed it at least once with 3 stars) the Guild Requests for fast drops. 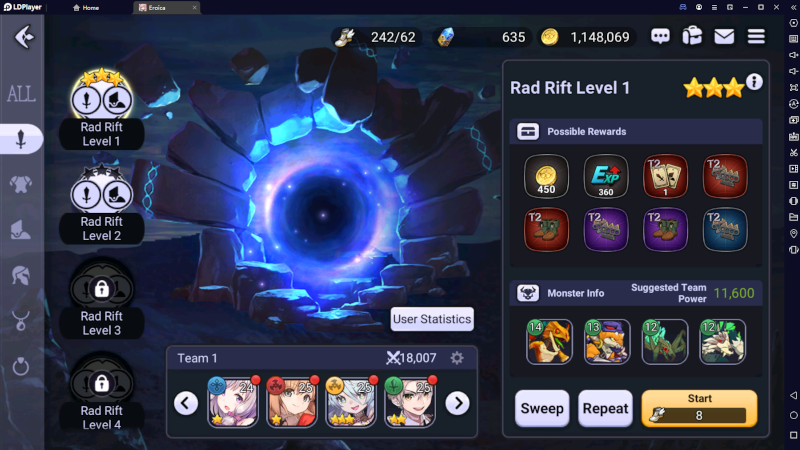 The “Dimensional Rift” is the dungeon where you can get the best Equip for your characters. There’s a total of 3 different Rift:

The higher the level of the rift you fight, the better the rewards (Tiers) while also the strongest the monsters. You can both Repeat / Sweep (if you completed it at least once with 3 stars) any rift for fast drops. 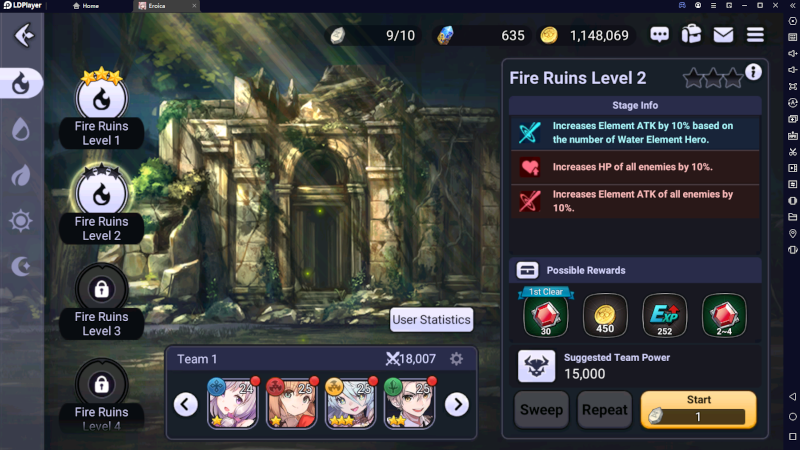 The “Ancient Ruins” is the dungeon for obtaining Runes, necessary for improving your characters. There’s a maximum of 10 entries per day (reset at 00.00) so choose wisely what runes you need based on the character you wanna develop first. You can both Repeat / Sweep (if you completed it at least once with 3 stars) any stages for fast drops. 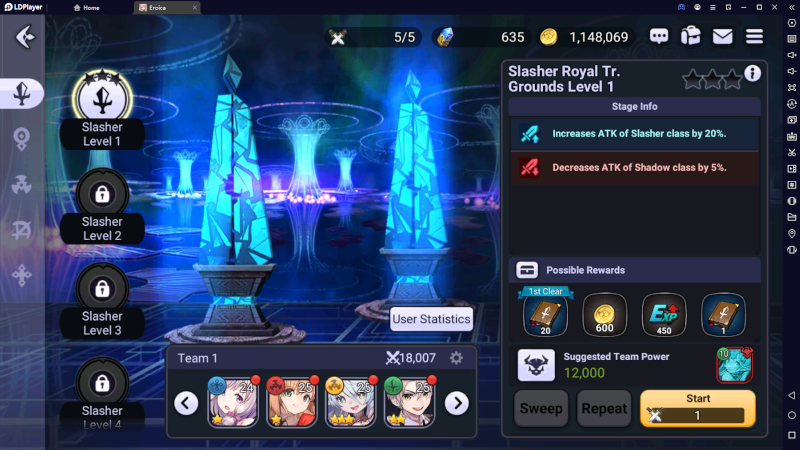 The “Royal Training Grounds” is the dungeon where you can farm “Class Skill Books”, necessary for improving your character's Skills. Same as “Ancient Ruins” the entry for this dungeon is limited to 5 x day. You can both Repeat / Sweep (if you completed it at least once with 3 stars) any stages for fast drops. 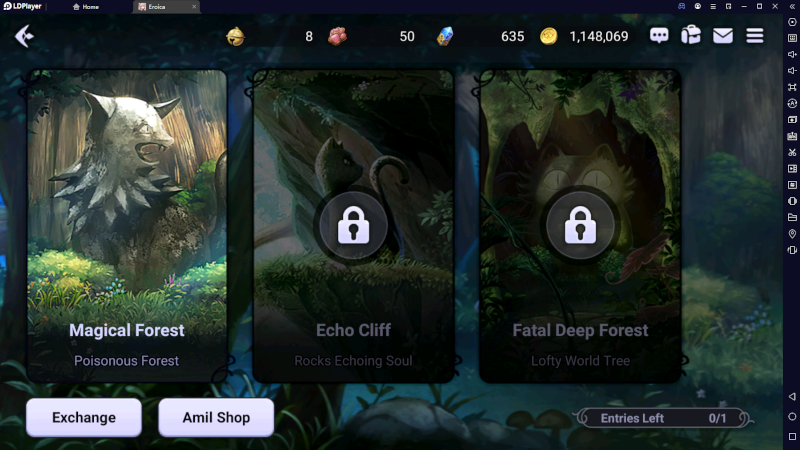 The “Nya Dungeon” is a content where you fight different stages (first one has 10 stages + Boss Stage) with your team, and you need to survive and defeat all the stages and the boss with selected team members. If a character dies during this exploration, it won’t be healed until the end, but you can change it with another one on your roster.

Nya Dungeon drops you “Golden Cat Paw”, a currency you can spend in the Amil Shop for Hero Shards and Tier 5 Equip. 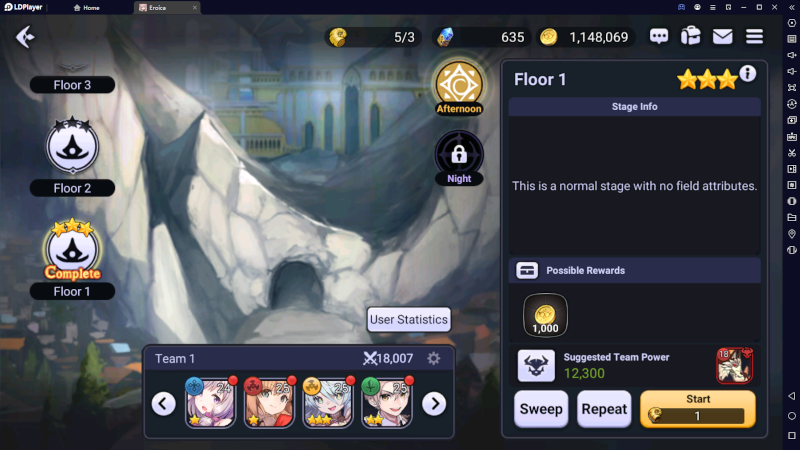 The “Azoth Tower” is a “Tower” you climb with your heroes to get rewards (usually Summon Tickets). There’s both “Afternoon” and “Night” stages. You can enter up to 3 times per day and try to clear this content! 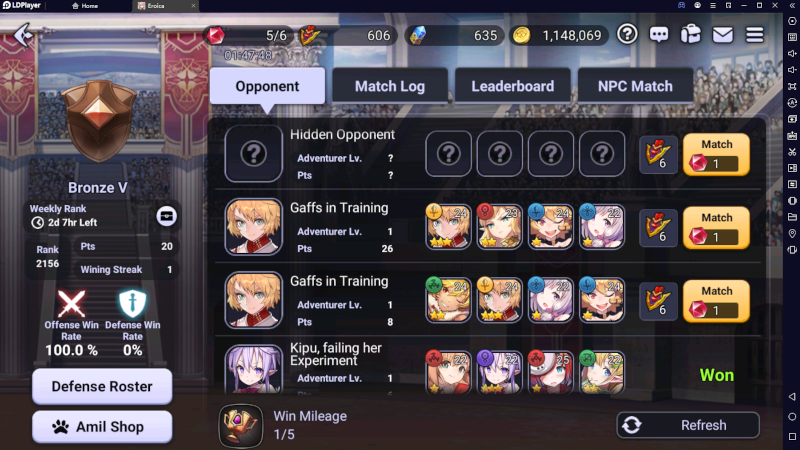 The “Arena” is the Player Versus Player (PvP) content in Eroica. it’s a classic Defense Team played by AI vs You. You also need to set your Defense team that will fight for you with other players. The rewards vary with your rank, from a minimum of 5 Crystals and 200 Medal of Victory to a max of 500 crystals and 1200 Medal of Victory. You can spend Medal of Victory in Amil Shop to buy Hero Shards and Tier 5 PvP Gear. 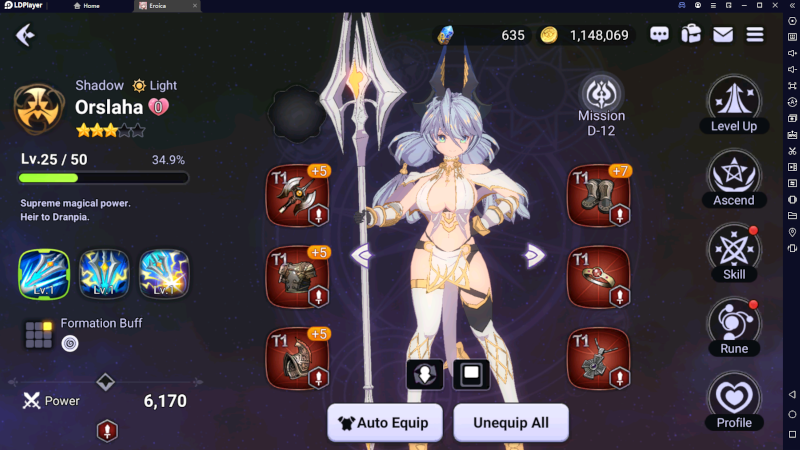 Your “Character” will need a very wide variety of Upgrades for become stronger: 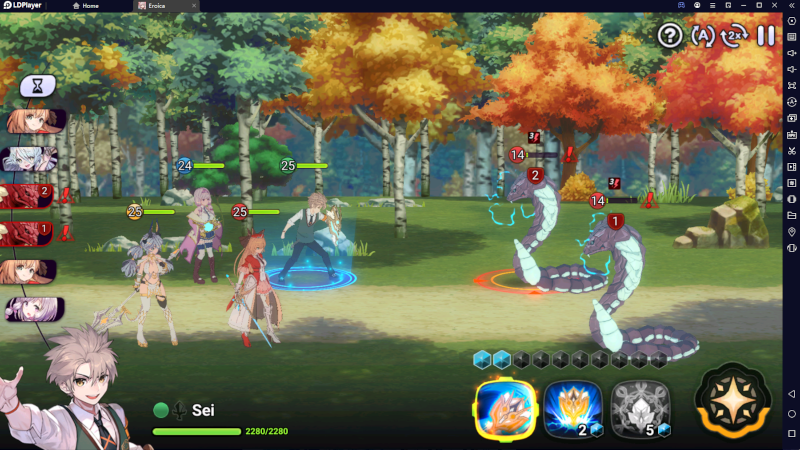 The “Battle” in Eroica is Turn Based, let’s see what you have: 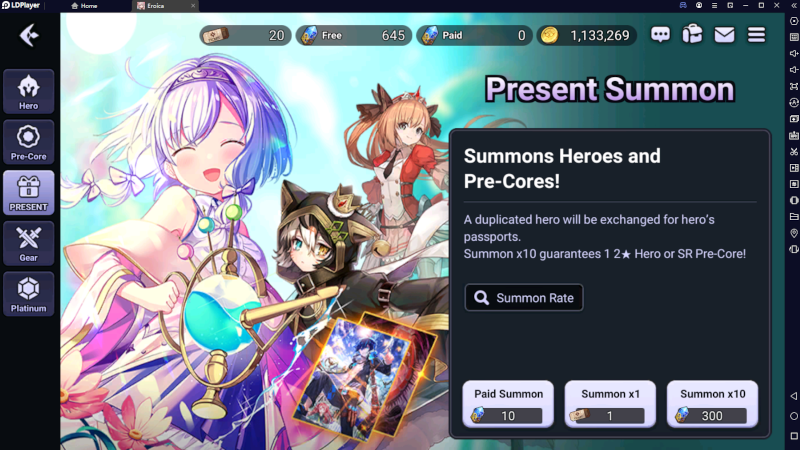 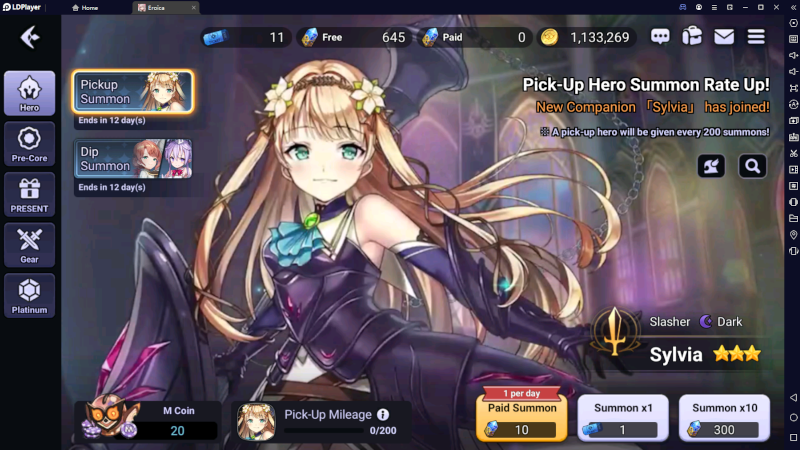 The “Pickup Summon” is the “Rate-up” Banner in Eroica. There’s only Characters in the banner. You can summon both with Free Crystals and Paid crystal, and 1 time x day you can do a single pull for a discounted price (10 Paid crystal instead of 30). Here’s the rates: 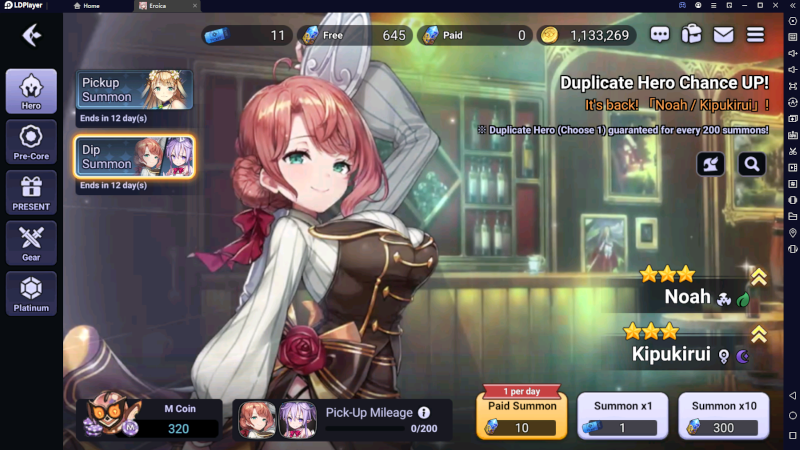 The “Dip Summon” is a Dual-Banner with Rate-Up Characters in it. There’s only characters in the banners, and same as the “Pickup Banner” you can spend both Free and Paid crystals, with the same 1x Paid Pull Daily discounted at 10 instead of 30. Here’s the rates: 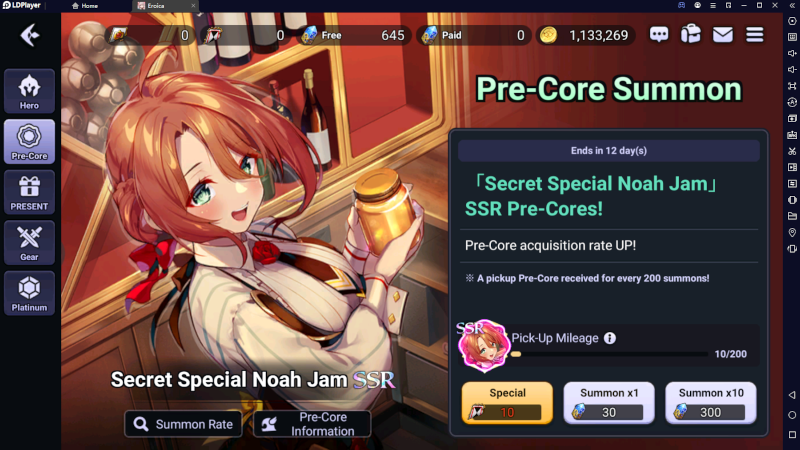 The “Pre-Core” Banner is a “Rate-up” Banner for Pre-Cores. There’s only Pre-Core in the banner, and you can summon with both Free and Paid Currency, while also using special currency “Shiny Pre-Core Piece” obtained if you dismantle other SSR Pre-Core. Here’s the rates: 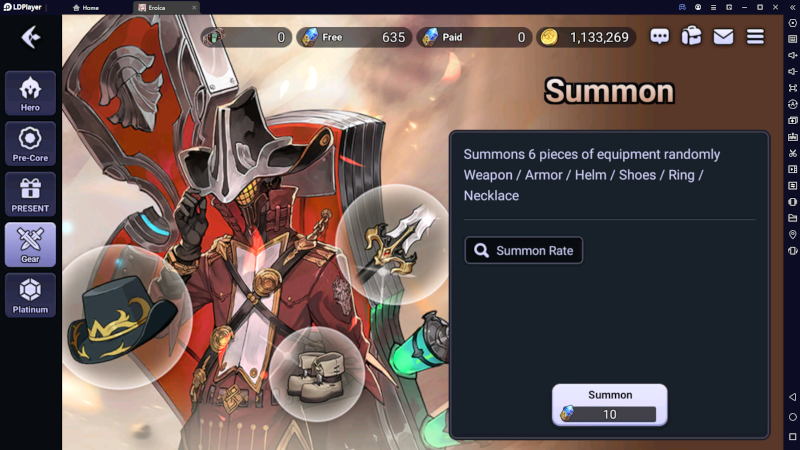 The “Gear Summon” is a banner that grows with your adventure progression. Starting with only Tier2 Gear in it, it progresses to Tier5 when you reach Chapter 4. Here’s the rates: 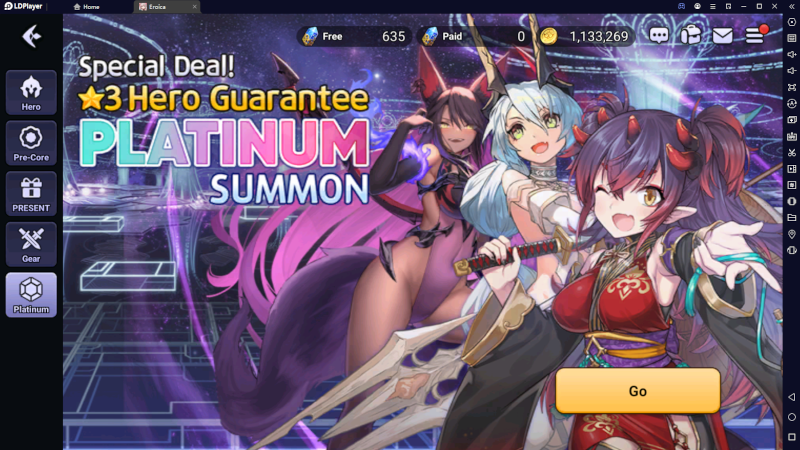 The “Platinum” Banner is a featured 1 time x account buyable content. Cost around 25$ (based on your country and currency change) and it Guaranteed a 3 stars hero. Here’s the rates: 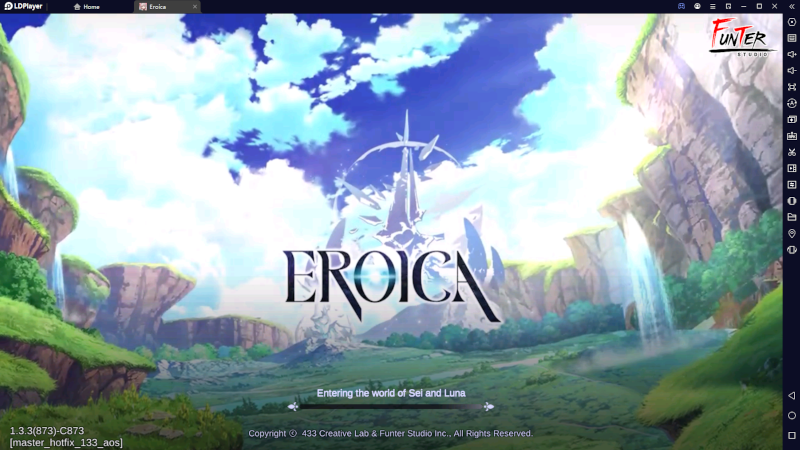 Since the game is very battery hungry for your phone, if you wanna play it at 60 FPS, the best way to enjoy the game at maximum graphics and FPS it’s to play it in LDPlayer 9! You will have a big screen, super smooth graphics and no battery drain for your phone! Enjoy Eroica with the best emulator for android! 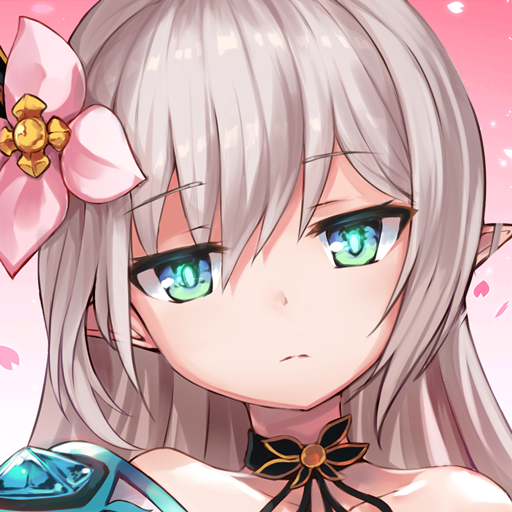