Epic Seven Solitaria of the Snow and the Recent updates

Here is the latest newest for the Epic Seven players, and not it has released the newest update for the game on 14th April. This is the Solitaria of the Snow, which is known to be the ML version of the Eda. And it can almost eat out any of the enemy gains which have been focused. All of the Epic Seven lovers are now getting a Eulogy. And it is for the saint who has been listed on the Book of Memories. 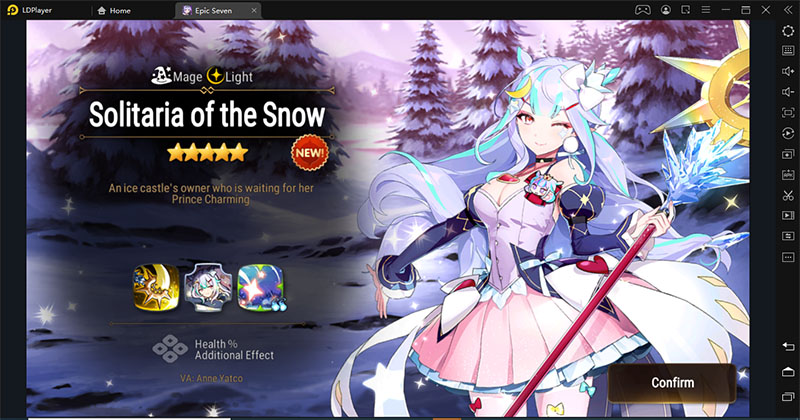 You can also few of the exclusive skins with this update, and those will be added to the shop. Skins are known as Tempest Surin skin and the Arden Gentleman Violet, and things are not ended in that. There is also the newest equipment for Ludwig and Kise in the most recent updated Epic Seven. So what are these added skins and items in this update? Let's find them in detail as follows.

Skyward Season Entering and the Details

To enter the skyward season, you need to rank up for level 60 or above in the game. And all of the players should have 24 heroes or more within them, along with four heroes. Four heroes have to be selected from each class, and they have to a graded from 2 stars or higher. This is not valid for Penguins and the Phantasma.

Every adjustment in this skyward season would be adjusted according to the lobby, Arena entry banner, and battle backgrounds. You will earn rewards of the season at the end of this skywards season, and it is all based on the league grade of the final. Players can find this season by going into the season rewards from the world arena ranking.

There is an epic skin as the Ruele of Light. And this will be rewarded for the players who are in the Master League. If the players are in a higher state of the skywards season's world arena skyward, they can also take this skin. You can reveal this skin image from a separate notice, and it will be announced during your play the season.

There are icons for each frame and will be rewarded according to the players' state in the game. Here are the details of the frames.

Those who have played in the match of the skyward season's world arena can earn a background pack. But you need to play the season for more than once for this. And this is included with the players who didn’t get the placements yet. Background pack is a battlefield you can use in the skyward season. Evidence of this battle would be covered in the ground.

Solitaria of the Snow – the Newest 5 star Hero

Lone Tundra, who was the owner of the ice castle, is waiting to be with this new hero on destiny as she has been misplaced in the daydreams. Solitaria of the Snow is the new hero, and she usually lost in the dreams. This one is a 5-star hero belonging to the light elements, and you can see her in the Moonlight, Mystic and the Covenant summons.

Daydreaming of the Solitaria of the snow has been begun to win first when she wants to remove her boredom and loneliness. It has taken a life, and now this hero is living in a fantasy wo0rld that has been build according to her own design.

Skills of Solitaria of the Snow

This skill can attack her all enemies with magic, and it has a chance of 25% to stun in one turn. If you use it in a caster's turn, this skill turns into an attack that can target every enemy. If the attack changed, it would not trigger a dual attack.

This skill can decrease the enemy focus by 100%. If the caster has been buffed at turn beginning, there is a 70% of chance to have a daydream in 1 turn.

Soulburn can extend the buff duration of the caster by using the Boom Starlight Fall in one single turn. And also, it can grant another more turn.

Stella Harp Drop and the Elena Drop Rate Up

Drop rate up is an event you can meet Elena. Elena is an ice elemental soul weaver, and she can decrease the damage of the enemy attacks. She grants the invincibility and effect resistance increasing. Layers are allowed to earn soul weaver, which is an exclusive artifact and the Stella Harpa. Stella Harpa can dispel on one buff from the allies when you are being attacked.

This update has been scheduled for 15th April to 22nd April.

The Book of Memories

This one is a special side story called Eulogy for a Saint, and it is going to be added to the book of memories with the update. You can purchase this side story with a sky stone. If you have purchased this, you are not granting requirements for entry.

Unlocking this event can be done by clearing the chapter 10 stage, episode 2. The cost of the story would be 900 sky stones, and you will have to deal with basic mechanics from other side stories in here. Players are allowed to replay stories and special side story when it has been purchased. Although there are no choices included with this story, there is a set path provided with you.

The primary rewards of the side story are the 4-star Artifact Resolute soldier series and the 3-star hero bask. To know more about the side story and the other improvements of the update, you can visit here to get a fully detailed description.

All of the heroes added with the updates can be earned through rerolling by LDPlayer.

Epic Seven has been better improved with the new updates, and everything added to the game has already increased the interest in the game. Al the new skins and he added heroes would be helpful for the gamers to beat the levels, and let's enjoy the developed versions to engage in the best gameplay with Epic Seven.