The developers of Epic Seven have just updated the ga,e. The server itself will not be going on maintenance time. However, to most user’s dismay, Chapter 8 is still not here, and the game is still on Chapter 7. However, there is a completely new Yufine side story alongside the brand-new Epic Pass with banners meant for Yufine and Roana. We’re going to be talking about the entirety of these patch notes in detail.

As mentioned earlier, Epic Seven’s recent update does not add Chapter 8 to the game but is still somewhat of a major update as it adds in the all-new Epic Pass which has tons of rewards for all the players who are interested. The update is downloadable right now on all platforms.

If you still don’t have the game, here’s how you can download, install and play Epic Seven for free on PC and get the best gaming experience possible. 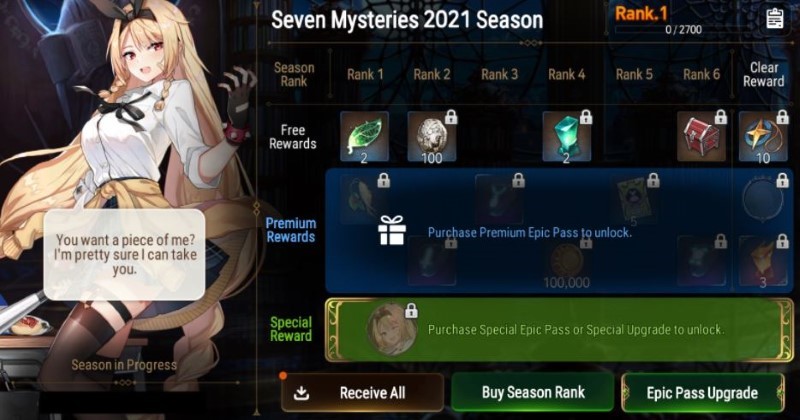 Epic Pass Seven Mysteries Season 2021 has finally been released. The new Pass includes a brand-new Dark Angel Rose skin with a special frame for whoever purchases it. The Battle Pass will be available from the 22nd of April till the 20th of May and will expire at 2:59 UTC.

In order to get the pass, you need to go to the main lobby and then click on the Epic Pass icon. You can increase your Season Rank by consuming the currencies which have been specified. As your Rank Increases, you gain tons of rewards and other cool items.

There are two tiers to the Epic Pass. The Free Reward mainly consists of free rewards that all players can get. Whereas the Premium Reward is only meant for players who upgrade to the Premium Pass which is paid.

Special Rewards are those that do not have a level requirement and only entail you upgrading to the premium pass.

You can gain Season XP by consuming the items mentioned below in any of the game modes available. Currently, there are 7 different currencies available which you can use: 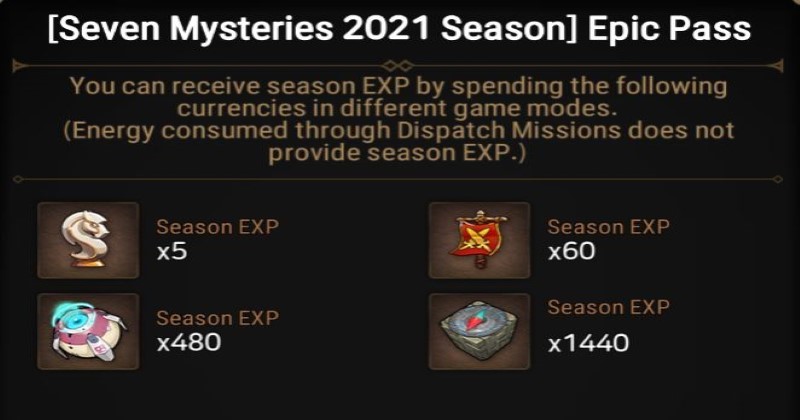 However, do note that players can purchase the Epic Pass once the Pass is expired during the reward period. But they will not be able to increase their Season Xp as the time period will have already elapsed. 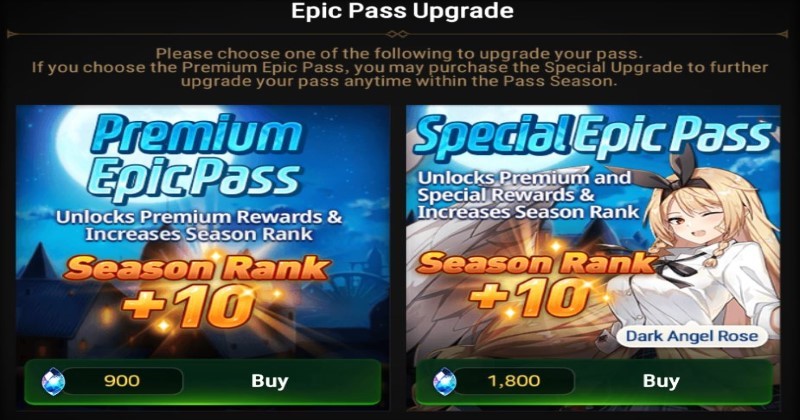 Each Epic Pass consists of particular rewards that you can get by increasing your Season Level. Here’s a list of both Premium and free Rewards you can get on every tier of the pass. 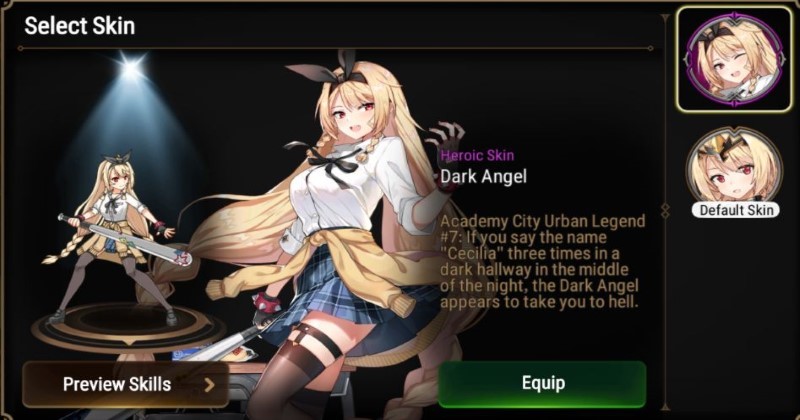 Once you equip the skin, the illustration of the hero alongside the cut scene will completely change. You can equip this skin at any time on the 4 Star Hero, Rose.

The Growing Pains – Side Story: 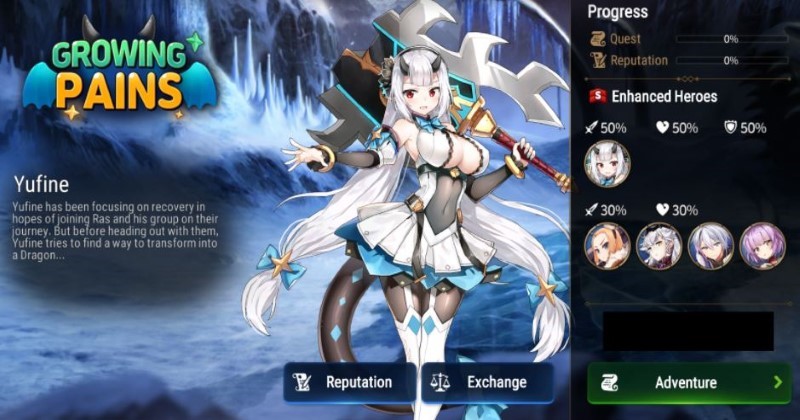 In the hopes of joining Ras and his group on their journey. Yufine has been trying to focus on recovery. Then, she finds out how she can transform to a dragon. The event itself will be starting off from the 22nd of April and will last till the 6th of May. To enter the Side Story, you’ll need to reach Account Rank 9 and then go to your Lobby and click on Side Story.

The Side Story will last for two weeks. You can clear side story stages, achievements and also obtain currency which can then be exchanged for items. When you are playing the side story, urgent missions may occur. You can also acquire 2 star monsters and catalysts. Check the Region Info for more details.

The Event’s currency are Emerald Pebbles which are found near the Dragon Valley.

In terms of Enhanced Heroes, Yufine has a 50% better attack, health, and defense increase whereas Charlotte, Cecilia, Adventurer Ras, and Mercedes have a 30% increase to Attack and Health only.

These heroes will have these buffed stats for all side story stages too. You can choose your difficulty on the 4th Stage (Moonlit Lodgings.) You can also select higher difficulty after clearing the one you have done earlier. As you increase the difficulty of the event, the energy needed to complete the entire event will also increase alongside the currency you gain out of it. 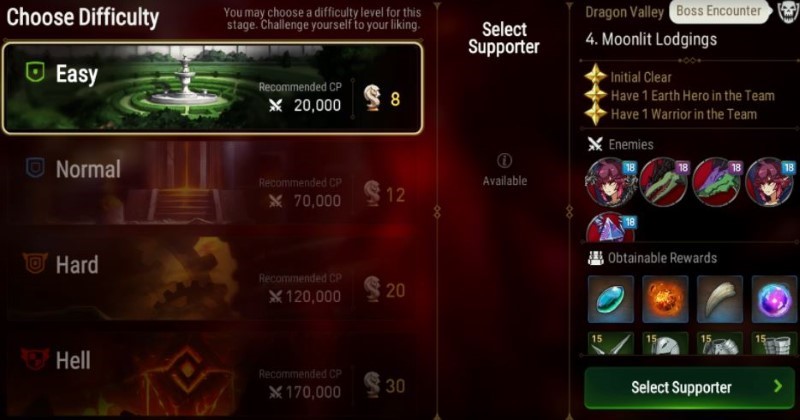 You will also be able to exchange the event’s currency called Emerald Pebbles for items present in the exchange. You are able to exchange your items for up to one week after the major side story ends. If you fail in doing so, the currency that you do not use will be discarded after the event ends. 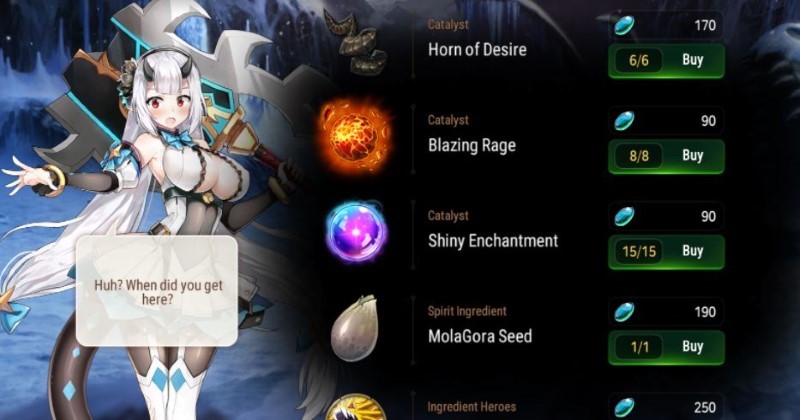 In this brand new drop rate up the event, you are going to meet the Earth Elemental Warrior Yufine who has great single target CC and AoE attacks that help her dispel enemy buffs while also granting buffs to the caster. You can also obtain her exclusive artifact, Merciless Glutton. It increases the caster’s total effectiveness as soon as you defeat an enemy. This event will be lasting from the 22nd of April till the 29th of the same month.

Roana, the Earth Elemental Soul Weaver is able to contain heroes that are particularly powerful with counterattacking and Dual Attacks because of her unique ability that allows allies to be healed after they have been hit by an extra attack, counterattack or dual attack.

You can also obtain the Soul Weaver exclusive artifact for a limited amount of time. It recovers the health of all allies after they have been attacked which is particularly useful against AoE heavy teams.

LDPlayer is perhaps the best Emulator out there to play RPG Gacha games like Epic Seven. The Emulator offers tons of features that help take your gameplay to the next level. By allowing you to create multiple instances to play several games simultaneously, you can easily re-roll on more than 1 account and use the Synchronizer tool to perform actions on them simultaneously.

If you are tired of playing on a touch screen, you can also adjust your key bindings and remap your keys to completely match a keyboard and mouse configuration/control scheme allowing you to have much more precise and accurate inputs.

The new Yufine event should finally give the hero the spotlight it deserves in the meta. Moreover, this is perhaps the last event we can expect from the game before the release of Chapter Eight. You can also expect there to be a few more minor events like these to be added to the game as we grow closer to one of the largest updates of the game yet!