Hey, for all Epic Seven gamers from worldwide. Epic Seven is entering a new step for a massive update with all the newly added items and improvements for the game. Now, this RPG has turned the latest action from celebrating its first-ever E-Sports event, the World Championship. So download Epic Seven on PC to engage in this magnificent event.

Developers have mentioned on their latest news to make the game more stable and create ways to meet new heirs through this world championship event. So let's see what contents are preparing with this massive event by the last week of May for the gamers by follows.

Contents of the World Championship event

Epic Seven World Championship will come to the world by the 27th of May as an update. It has been two years since Epic Seven has been released, and it has several heroes that have excellent abilities with them. As some players face challenging situations for managing the heirs, epic seven developers have added so many systems to aid their heirs. Some of them can be known as pets with repeatability, bulk promotions, and the adventure's path.

Due to many requests from the game's players, epic seven developers have decided to reduce the rising levels and the acquiring difficulties of heirs. So it has been offered with four kinds of summoning improvements to reduce the states of the heroes as follows.

Most of the players in Epic Seven are likely to start their game with the favorite hero they like, and they likely to choose them from the selective summons. So this situation was tough for gamers. So Epic Seven has decided to offer a 5-star hero from the first summon you to perform, and those heroes will come from the 10th, 20th, and 30th summons as well.

Not only that, all the heirs of the game will enable them to record their most liked selective summon pool and select that pool when the selective summon is ended. Al of the hero ratings will be seen through the page of selective summons as they are made, and it will act as a beginner guide for the new players. And the most exciting other news is that you are gaining another new selective summon by clearing episode 3 in this game.

You can now learn the way of rerolling through an easy guide from here. 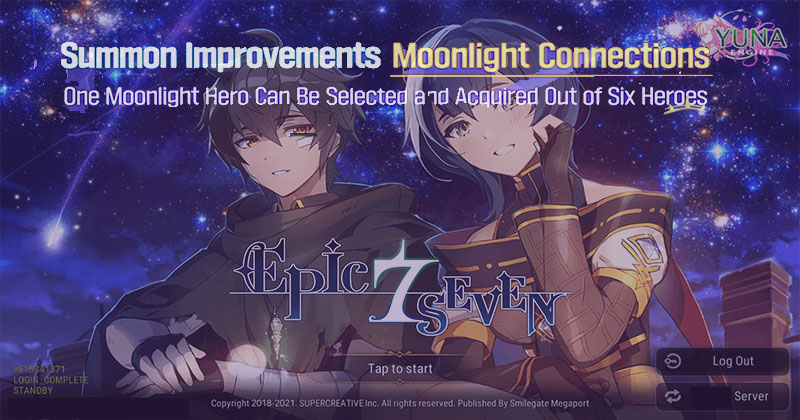 Moonlight connections are for all the players, and you can open this by clearing the episode of the sanctuary gate underground. All of the players are allowed to choose one moonlight hero of here from six choices. The ones you can select from the six choices are Arbiter, Judge Kise, Specter Tenebria, Vildred, Martial Artist Ken, Ruele of Light, , and Dark Corvus.

You can't use any of the moonlight heroes for a defense team or the world arena, and also, some of the functions related to the growth of these heroes will be locked. The four areas which have been locked can be unlocked if you complete some specific missions. When all the missions have cleared, your selected hero will be summoned fully, and he can be used for all content in the game.

You can obtain Alexa, Furious, Lorina, and Montmorency as the heroes in this connection, and those are very helpful for the new gamers for clearing the contents. Some of the missions were so much harder to pass on that these heroes were not easy to acquire when you need them. Therefore, the level of difficulty has been adjusted with the new update to gain a chance to make connections.

Angelica, the best PVE hero, will also add to the game to help the players pass on some content. There will also be some recommended heroes marked in this connection to make it easier for the players. 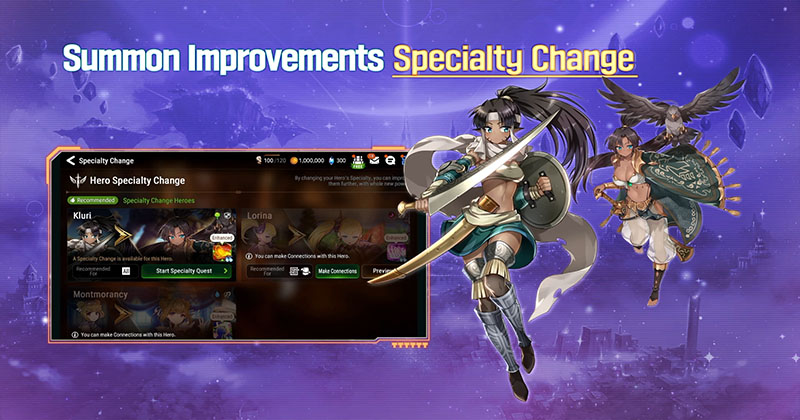 The chance of specialty change a hero will be unlocked at episode 1 clearing. If you don't have a hero to undergo it, following the new update will enable all the players to have the popular hero Kluri. To do this, you must complete the tutorial, and this hero can be changed into the Falconer Kluri by specialty changing. If you are a first-timer specialty changer, you are going to be offered some runes so that it enables you to enhance the skill tree. 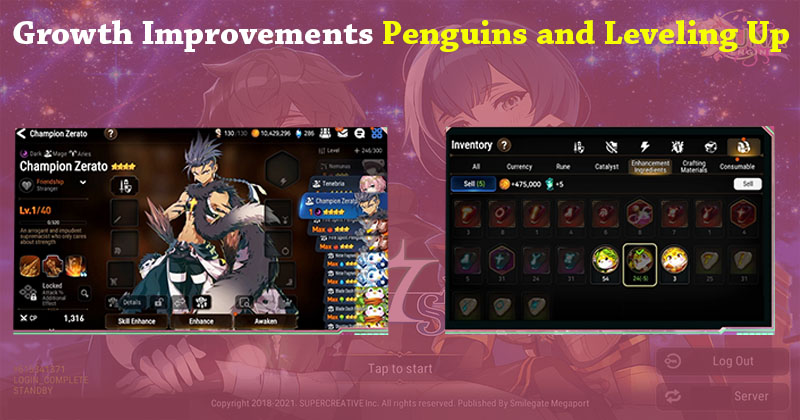 The new update will offer the players some growth Improvements to some of the challenging parts of the game as follows.

Penguins and leveling Up

You don't have a specific limit to have penguins, and you are going to get the chance to sell them quickly by the inventory area. When penguins are heavily using, it should be easy to obtain them as well. These all improvements are made to adjust the farming difficulties of the game.

You may own a farming hero with yourself, but when the ingredient heroes reach the maximum level, you need to swap them for another. From this new update, players are getting a chance to play through the main story, and they will play the side stories by having a maximum level hero. This excess EXP is going to be used as the Penguin Hatching Mileage.

When the mileage is total, you are earning a penguin. With this new updated change, you will not rotate continuously with 2-star ingredient heroes, and they can use penguins to level up heroes rather than earning penguins. You can level up your other players from penguins as well.

.now you have earned a penguin mileage, and it is a must to make the team with four heroes who have the maximum levels. To make this process easier, the item "Potion of Ascension" will be added with the hero promotions, and it will promote any hero for a six-star champion. Players will only get a limited offer to get this item, and chances will be given from the Adventurer's path completion.

Those who have completed the Adventurer's path will be offered the "Potion of Ascension," and it will be accessed through the mailbox. 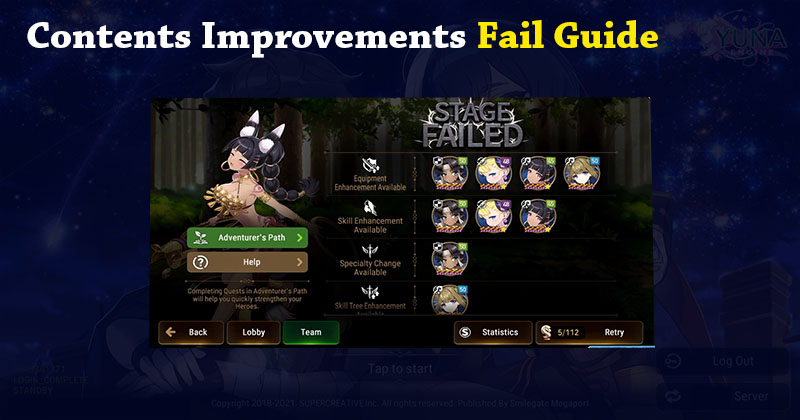 And lastly, the new update of the Epic Seven comes with an offer for reducing the raising and growing difficulties of heroes. This comes as a content improvement, and there are two sides to it as follows.

Pets will be unlocked from a low rank, and it will give a chance to the heir to repeat the battle functions utilized. And also, the Additional Abyss Guide and the Labyrinth Compasses are going to be given when payers are reaching certain ranks of the game. It will make you so stringer and provide chances for precise more contents.

Abyss rewards will be improved for the 40th floor, and players will be equipped and charmed with tit easier. The side story of the game will be at as a tutorial, and it is going to explain to you how stories work in a better way.

Side stories' requirements will be adjusted with the new update, and your rewards will be improved from that. Side stories usually are unlocked then the player reaches rank 9. But the players who are in this rank may face problems here due to the difficulty level. So that new update is going to make side stories unlocked from the episode 1 completion, and it will give better chances for players to face challenges.

Alexa's side story called "Dear mentor" will be opened up for all the heirs with the new update, and it will act as a tutorial to explain the working process of side stories. Rewards from the side stories will be increased, and the energy levels you need for some content will be reduced by 25%.

All the exploratory side stories will include the MolaGora challenge and the Goblin Challenge to make players earn more gold and MolaGora. Friendship items that come within the main hero of the side story will be added for the exchange shop, and those items that have been delivered through last year's Christmas side story are going to be added to the exchange shop.

The element is going to follow the element of the main heroes in the story. It will be increased the charm drop rate, and the level of equipment will also be dropped less. This is going to be a help for the burden of gaining charms and helping the issues of equipment inventory. Quest reward will be added with the epic and rare catalvst selection tests, and the amount of gold you can gain will be increased.

All the quest rewards will be added with received all functions and overall difficulty after the episode 1 precise, going to be increased. All the easy challenges are going to be more complicated than the current normal.

And the hell difficulty level is also going to be more challenging. So your primary hero buff will have a more substantial effect with this new update. Players offer a chance to use the maximum level 60 hero with fully awakened and maximum skill enhancement.

The guide which appears when failing a phase will provide some more practical information with the new update.

When you select the catalyst, you want players to be directed to the AP shop to sell the selected catalysts.

New content has been prepared for the day of the Ezeran Foundation, and a new type of side story has been developed, which is known as the Advent. It is content dedicated to all the advanced heirs and will assign nine heroes to make a battle against a powerful boss. Heroes are organized into three parties, and each phase has stronger bosses. The battle has three phases to battle each phase by each party.

The elements will grant buffs, and this content will be unlocked for the players who have cleared episode 2. All the heirs can earn sub stat modification gems which are need by them from exchange shop and rewards. Exclusive rewards are added here, and they will not obtain from the normal side stories.

His is the most significant update planned by the Epic Seven developers for the 2021 year, and it will be a gate that leads you to a specific dimension from an isolated area from the ruins of Shandra. A memory chain researcher has been asked for help from the guild to conduct investigations. You need to explore fog-covered ruins here and search for some relics. And also, you need to hunt down the bosses with your allies.

All the heirs who are increasing their ranks and those who are raising can participate in the guild. This ancient inheritance is scheduled to be updated at the 3dr anniversary of the Epic Seven.

Epic Seven is announcing major improvements and making it easy for the gamers to enjoy its gameplay by its update. So it will be a lot more interesting with the newest updates, and let's join Epic Seven's significant turnover by the last of May.