Call of Duty: Mobile has been around for well over a year now and has become one of the most popular FPS games on the mobile platform. Call of Duty: Mobile has been developed by Tencent and published by none other than Activision, and the particular polish shows in the game. The polish in terms of guns, content, extra attachment, and game mode is undoubtedly there, but every game comes with its own set of glitches and bugs, along with some exploits that you can use in your favor. Today we are discussing precisely that. Nonetheless, you should know that as this is an FPS game, it is best played on PC. 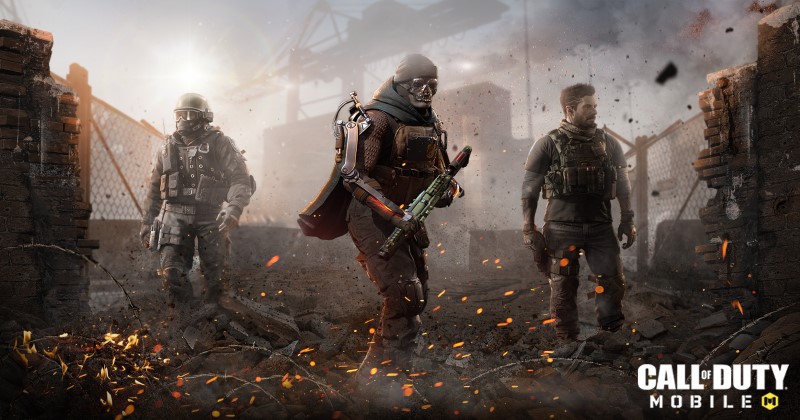 Call of Duty: Mobile is fast approaching season 6 of the game, but sometimes, quite a few players complain that it seems like it's still in its beta version. This complaint is because they believe it's such a glitchy game, and players exploit these glitches to find new secret locations. Such locations are continually being discovered to this day. Hidden spots and glitches out of maps that are so ridiculous in the game that you don't even know how they're possible.

We believe this adds a fun element to the game as players regularly share these locations for fun. We love breaking games; we love seeing people breaking games and going outside of the maps. Games being broken this way and players finding secret locations keep Developers on their toes, so they keep updating to remove these glitches; otherwise, players will move on to the following best things.

If you love these glitches and secret locations like us, read this guide and share the fun with us. For more in-depth information on all things Call of Duty: Mobile, read our collection of guides.

Below you can find our 10 chosen secret locations for this particular guide.

Our first location for this guide is on the High-Rise map. You need to go towards the side where you see large tower cranes in the distance. This spot is typically known as the Crane Secret location. You need to get over to the gigantic Crane by climbing the ladder on your right to the roof. You jump towards the hanging beam and use that to traverse towards the Crane. Secret Location # 1 is an excellent spot for sniping, you might already be aware of this spot, but we wanted to share it with you. 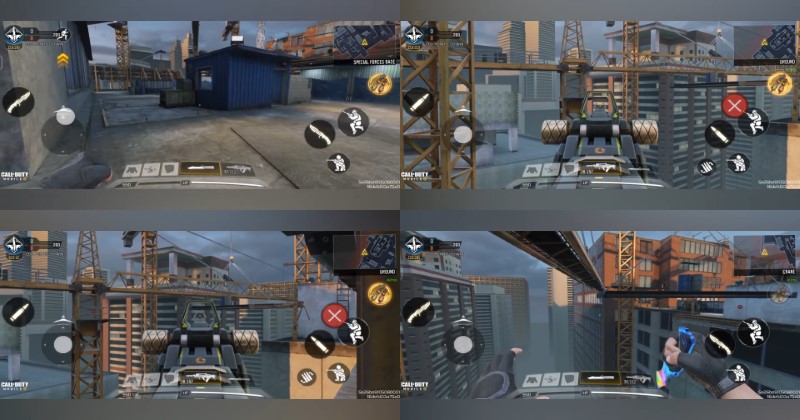 The other spot right there that you might want to get to, though, is just below the Crane's arm; you can try to jump down from the center of the tower. Keep in mind; you need to use your gravity spikes to land at the platform, as shown below. Don't move around too much because the second you start moving; you might fall and die. You also can’t get back from the spot, so unless someone kills you or you jump to kill yourself, you are stuck in this location.

This trick uses a wall to hide behind its back in Battle Royale mode. The area that you want to land to perform this glitch is south of the Crash zone. You can see the spot below where you should finally land when you have left the plane. Keep going towards the mountain range walls until you see a watchtower in front and a camp on your right. Turn left when you see the Exit sign and look for the grass near the mountain wall, as we have shown below. You can see there is an opening, probably a missed texture file. You need to crawl to get into this place. 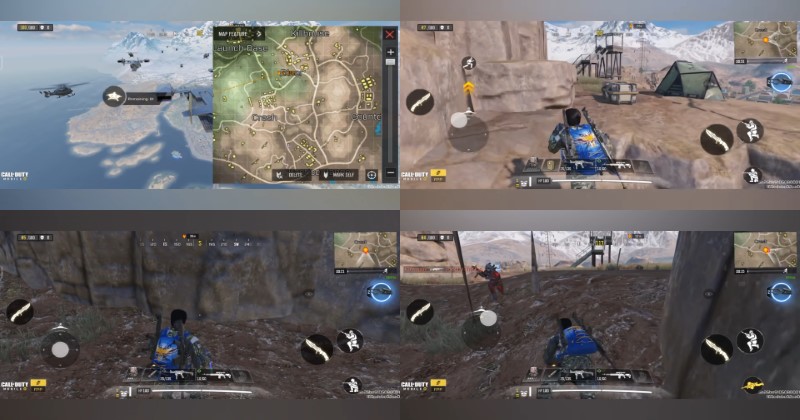 Reclaim, one of the most beautiful maps in the game, has our 3rd secret location today. You need to go to the window sill shown below, you need to run and jump towards the nearest banner. You'll notice if you have done it correctly, you are on the spot in the pic below. Now you're going to edge your way out, so you can't see any more of the banner and just run and spam the jump button until you are on top of the bridge connection walkway between the two buildings. You now have an excellent Vantage point on both sides of this causeway and the spawn areas. 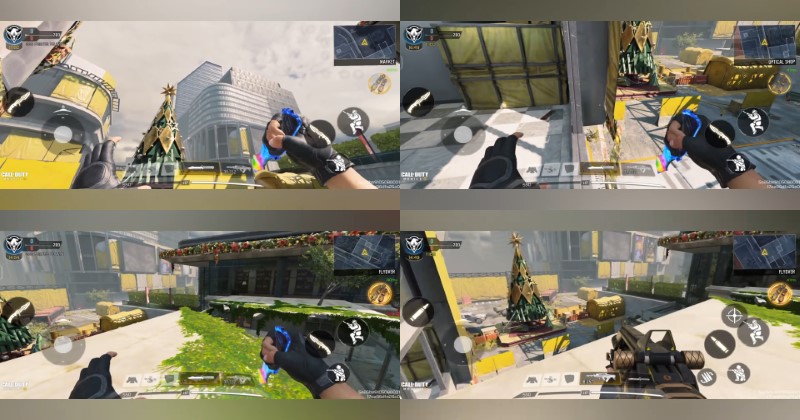 Another location on the same spot is when you see the Red Super Car from the top, just run towards it and as soon as you are near, use your Gravity spikes, and you will land on top of an invisible ceiling. You have to use your gravity spikes again a second time. Using this trick is impractical in a public lobby which you shouldn't even be doing it. Doing these tricks is just for fun. And now you're on top of the building, which is one of the most unexpected glitches you can find. Unfortunately, you cannot go any higher than this. 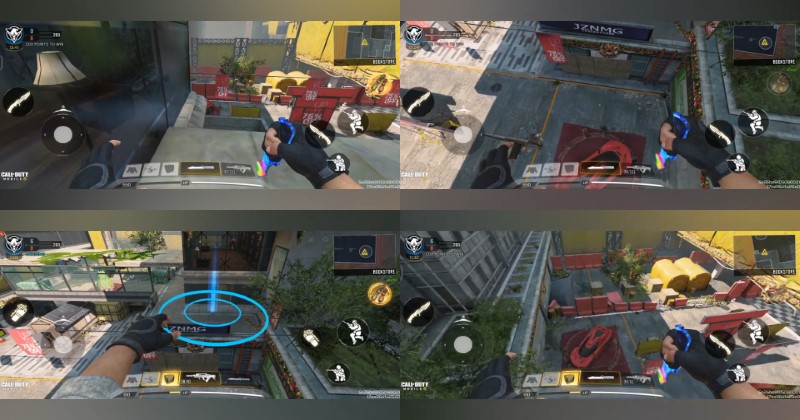 The following location is a bit easier to do, and it's found in the map the Stand-off. For this location, you need to stand on the window sill on the second floor of the building and jump and immediately use your Gravity Spikes to get the boost to land on the roof.

On top of the roof, you get a perfect Vantage point right on the spawning zone. Believe it or not, you can get even.

#5 location is a bit difficult than the # 4, and it is just near the exact location, as you need to jump and reach the second roof on the precise location. You need to be careful because you may die attempting this jump as the game considers this jump outside the game's barriers.

This spot has a higher vantage point than location # 4 while giving you a decent amount of cover.

You can find the following location in our list in the Raid map, not the Winter version of the map. To understand the specific area of the map, you can see the pic below and should be where you can see us precisely on the minimap. We are next to the Square Center location on the map.

You're going to need the shield turret, and you'll need to place It right there alongside the wall. If you don't see it, move it slightly as it might glitch and be a bit buggy and should see it. You need to get inside the turret and simultaneously swipe to the right, and then you're going to glitch inside. You can see this in the pic below.

Place down and transform the shield, hop over it, and now you are inside the building, underneath where the regular players can run. Here you are entirely glitched inside underneath the Raid map. There are some locations from inside that your bullets might hit the opponents.

You can do the same method in Nuke Town Russia to achieve similar results in quite a few places. We leave them to you to explore and find them as a scavenger hunt.

You can find this location on the Dome map. You need to run right from the weather globe in the image below and go underground bunker. Once inside, go to the far end and place you’re shield there. Jump on top of the taller side of the shield, and you will see a broken beam right in front of you, as you can see below in the image. Jump on the beam and come out of the hole and run as fast as you can so the warning signal from the game doesn't kill you. Now you've casually walked outside of the map, simple as that you are outside of the Dome. At this point, you are free to roam anywhere, but you have to be a little bit careful because there are a lot of places where there are death barriers, but in a private server, this is like the ultimate hiding place in the game as they are never going to know where you are.

You can find our 8th Secret location in Oasis, which may not be a glitch. You need to get on top of that small rooftop which you see just Infront of the Golden domes. You need to jump on the sides of the ladder. This ladder can be seen on the left, right next to the wall. Jump until you reach the top of the ladder. Once there, take out your Gravity Spikes and aim for the roof in front. Get to the edge of the roof, so the warning zone disappears, and you can lie there prone. Now you have an excellent vantage point. If someone isn't used to seeing anyone up there, this is an easy kill. 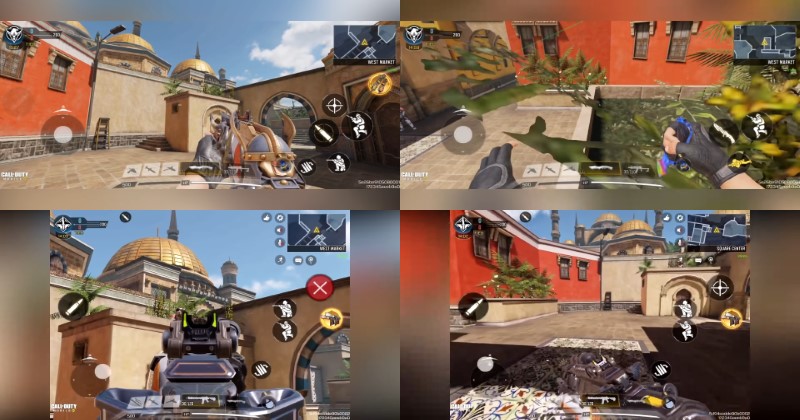 9th location is also on the Stand-off map of the game. You need to go out the window, as shown in the image below. You need to take out the Care Package signal and mark it as directed. Wait for the drop to arrive, just wish that the Care Package doesn't fall off the rooftop cause then this trick also falls flat. You need to jump on top of the Care Package. After that, you need to run and jump towards the tree in front of you. As soon as your midair, use your Gravity spikes to land on the tree. Landing on the tree might not work the first few times, so you need to keep repeating the run, jump, and spike to be successful. The hard work is worth it as you'll soon be on a spot where you’ll have the best Vantage.

There is no way someone will find you out even when looking hard because the trees camouflage you if you sit back and are prone. They'll run past as if nothing happened. The best thing is that it might not be the only sport to do so, you may find much more other than what we have mentioned above.

In Downtown, the Dancefloor is open; this secret is pretty straightforward. It is slightly tucked away, so it merits a mention.  So, you land Downtown and head straight to the largest building in the area. On the bottom floor is a dancefloor with a DJ turntable on a small stage. Head over to the console, and you'll have a choice of three songs to play. 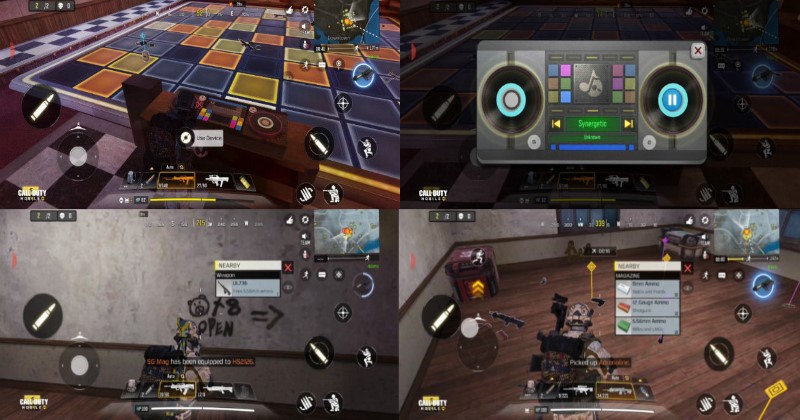 On a similar note, the Sanitarium area is pretty much this huge building. On the top floor is a locked room with a message on the wall. You’ll have to destroy eight teddy bears that are scattered across the Sanatarium to unlock this room. Once you do, you’ll get access to a bunch of high-level loot items.

Since the olden days when Medal of Honor was still a new thing, players would always look for vantage points by jumping off walls and rooftops to find places where they could pick opponents one by one. It still is the craze to date. The only problem with such Vantage points and secret locations is that enemies will know your spot after one or two kills, and you won't be able to exploit it any further. In the end, this treasure hunting should be for fun and not used when playing competitively because then it isn't fair play and should be under the guidelines of the Game Managers.

Download Call of Duty®: Mobile - Season 6: The Heat on PC