Forsaken World Gods and Demons - What Class to Play?

Here is another MMORPG with an open fantasy by Youzu (Singapore) Pte. Ltd. Enjoy the endless never-ending adventure with a world that had so much treasure and glory. Meet several characters with unlimited customization options. You can either choose to find the lost artifacts or to enjoy fishing around a shade.

Who doesn’t like to become a legend? This game is the MMORPG that lets you become a legend on the Forsaken world and make the future of Calindor. Uncover every secret that Calindor hides and chooses to become a savior or a conqueror.

Enjoy the large scale PVP that Forsaken World Gods and Demons holds and build some guild to join. A new adventure is looking forward to each time you log in. mix your every abilities and combat skills as per your wish and create your play style.

Face into the most significant challenge in Forsaken world Gods and Demons and become iconic in that world.

When you go through the game, you will meet some classes for your gameplay. You can specialize and customize them as you wish and win the challenges throughout the world. But how can you face the challenges without knowing what exact class you are going to play? Yeah. We know. That is why we bring you the solution.

What Class to Play?

The game Forsaken World Gods and Demons is specialized indeed with a variety of characters. Classes are the most expecting and awaiting point in the games, and Youzu hasn’t forgotten about that. They did justice. You have offered the game, seven different classes, with different playing styles for gamers.

Although the publishers are giving the options to choose the classes, it is evident that picking a character depends on what you decide. Your decision can affect combats in the game with classes.

It is you who chooses to approach the enemies with aggression or to cover. You may prefer to destruct your enemies with spells, or you may like to defeat enemies by arrows in the distance.

Choosing what you need is the exact point. Based on your decision, you have to match your class with your play style. You have to learn how every class is acting and what playstyle these classes are held. So here we describe every class playstyle, and we recommend you what class you have to choose to play on. Let’s start then.

There are a typical qualified character and a class in every MMORPG game. Here that place goes to Warrior. As usual, he likes to make a start on the full combat of the Forsaken World Gods and Demons. The Warrior takes the first step in the game for the combat.

Warrior holds a sword in his hand for combat. He trusts it with his whole soul, and that is the weapon he uses to enter into battle. Warrior rushes into enemies with a superpower to destroy them. 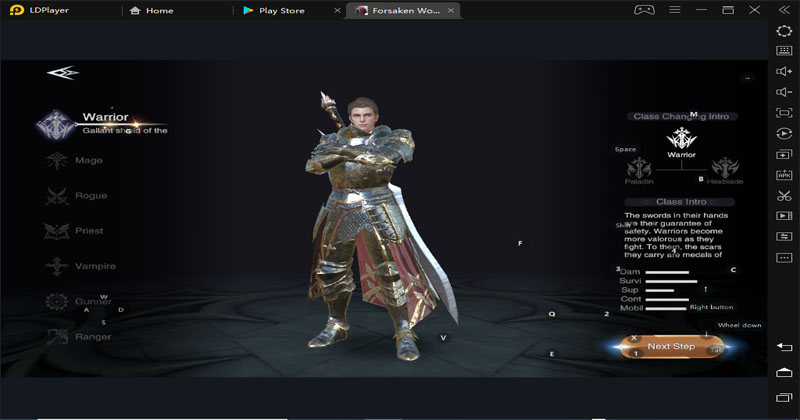 This class has no mercy for his enemies. He becomes more violent to his opponents when he enters the fight. So basically, this is a superclass to choose your game to start the combat.

Warrior is a class who can quickly master. He is not more complex to understand, and his playstyle is highly capable of grasping for a beginner. However, Warrior is pretty easy to master; his playing style is going to change after you change the classes. Pretty interesting right? This class can change into Paladin or the Hexblade.

Warrior is continuing his playing throughout the game in a challenging way with high defensive skills. So the first recommendation on classes is the Warrior.

Mage is a class who hold a lot of versatility feature, and she is performing witchcraft. This Mage is a class that explores the magical world forever. The Mage uses the spells to fall her enemies and mysteriously take her enemies' health slowly.

The Mage uses a playstyle with a very forward attitude, and she is well known to spell cast in the distance and watch the enemies fade. 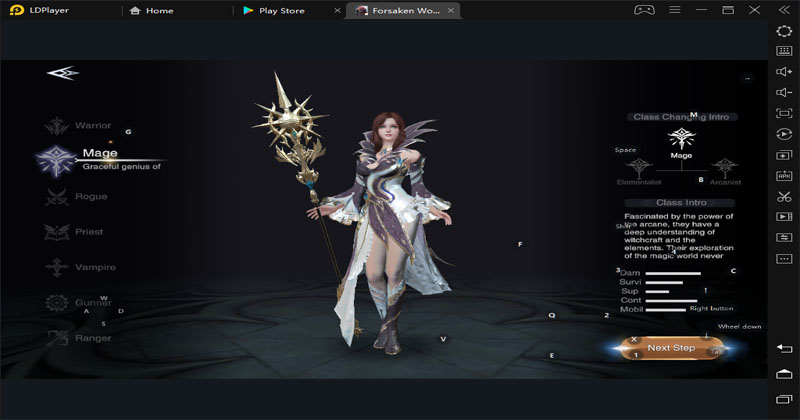 Mage is turning into Elementalist or to Arcanist. So it will eventually turn her damage output into a max level, and she holds good control skills in the game. Mage is paralyzing her enemies and weaken them desperately. This Mage class would be a perfect class to choose for the gameplay as the second option.

Our third class is on the Rouge. We would not recommend you to start the game with this class as it is too weak to start the game. But he has some right play style, and he uses daggers to give deadly attacks for his enemies. 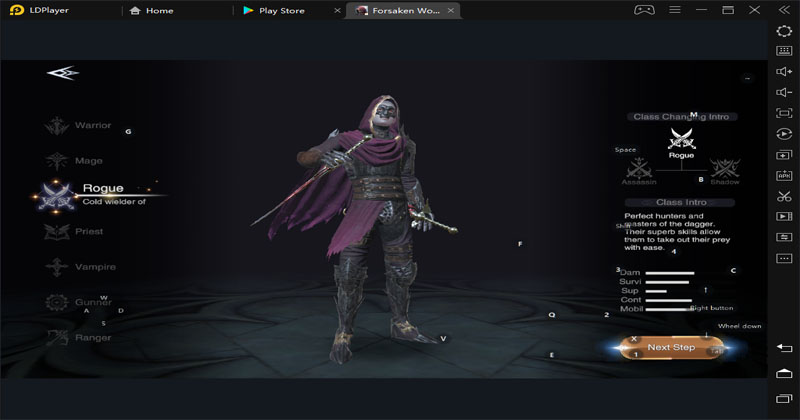 Rouge is changing into classes Assassin or the Shadow. Although Rouge is somewhat weak in combat, he is capable of having survivability against excellent melee damage.

The priest is usual healers, as in many MMORPG games. She is very capable of healing and leaves until the end of healthy classes. We can say that priest is somewhat tough on the battles but remember they are not very capable of fighting as they are slightly slow. 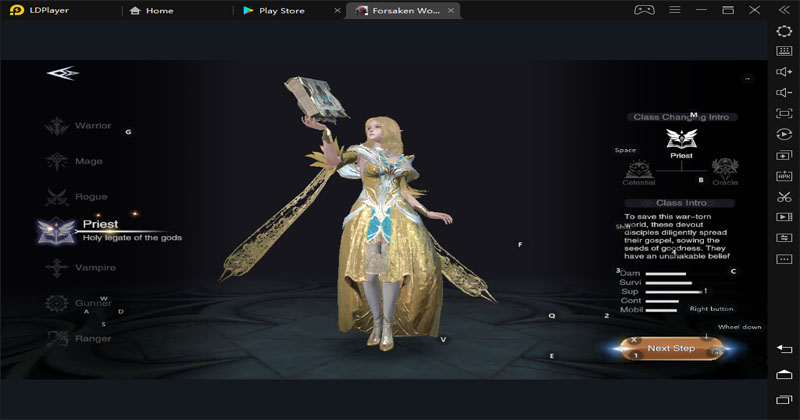 Priests are changing into Celestial or to Oracle. Typically priests are very hard to defeat as they are surviving. But she is not a strong class as others. So teaming up with another strong one but turning into celestial would be much better.

Here is an iconic class. The vampire is getting more attention with strong spells in the form of bats. He is throwing them towards his enemies, and he is a class that combines magic with martial powers. So the class vampire is highly capable of defeating his enemies strongly. 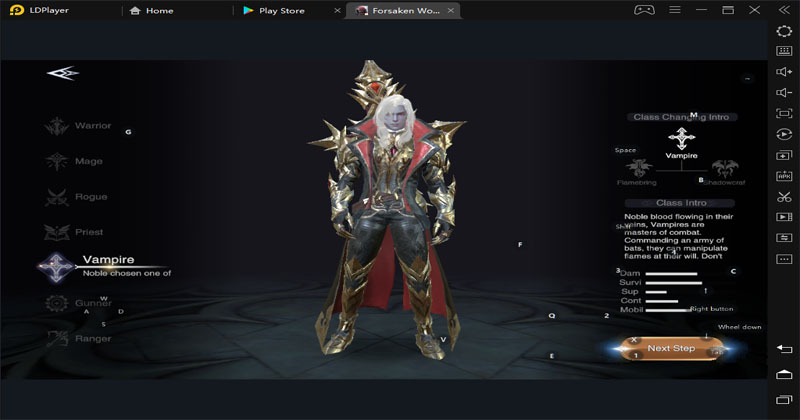 The vampire can change into Flamebringer or to the Shadowcrafter. And also, he is much known as a super beast in the Forsaken World. He maximizes his survivability with the army of his bats. So this class would be the most durable class in the game with a superpower.

Gunner is a tiny character who uses so many weapons to dispatch the opponents. She uses her skills to evade her enemies to a distance and is much known as a one who is capable of doing a ton of damage. But remember that gunner can be easily broken. 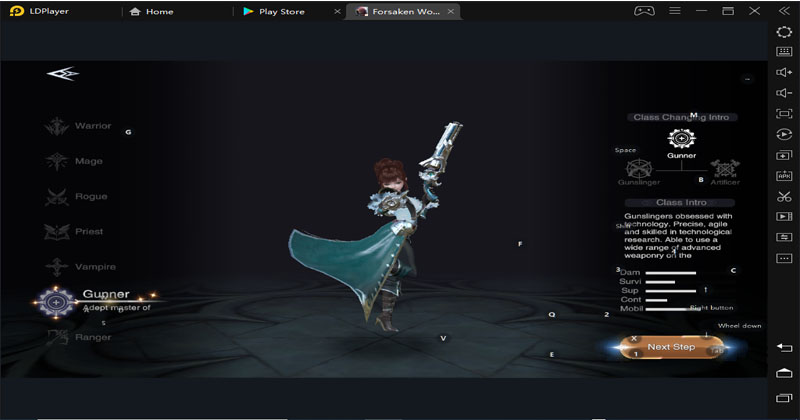 Gunner changing her class into Gunslinger or Artificer. It maximizes her damage ability and survivability. So this tiny character would not be a vast bad for the choice.

Ranger is a bow wielder. He doesn’t engage with excel, but he is making responsibilities to defeat the enemies by using his endless number of arrows. The class Ranger is changing into sharpshooter o to Jungle Archer. When changing the classes, he is much focused on damage and control. So ranger is capable of slowing the enemies with his skills. 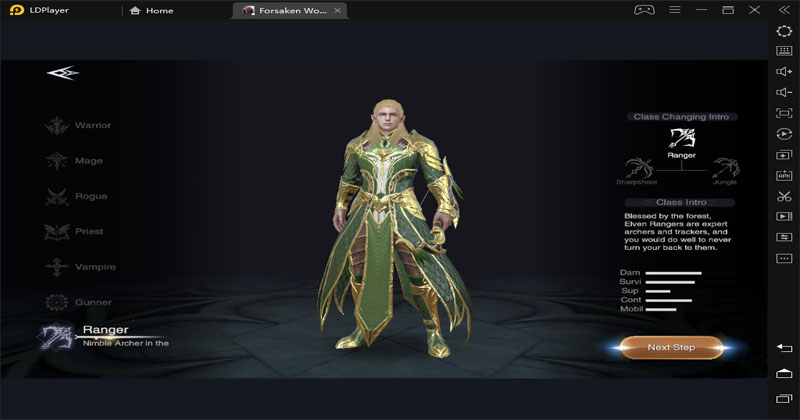 When the ranger is changing the class, he becomes more attractive due to his attacking speed. When reversed, the ranger is speeding up his attacking skills and also the survivability. He does that speed up by summoning the creatures of exotic features. But ranger is not much strong as other classes.

As we mentioned in all classes, our recommendations on classes are go with the Warrior, Mage, Vampire, Ranger, Gunner, Priest, and lastly, the Rouge in respectively. So be aware of each class's skills and their play styles before you play it.

That is the correct way to become a master in Forsaken World Gods and Demons. So enjoy the world of Forsaken and perform more significant combat with these unique classes without wasting any seconds.