There's been almost a nonstop buzz about Axie Infinity, a new game that has gained instant popularity in the U.S and Philippines after being launched for PC and mobile. It is a Play-to-earn game that rewards you with cryptocurrency known as Small Love Potion or SLPs. After getting these, you can convert them to various cryptocurrency exchanges and get real money.

Sky Mavis developed the game; they also own the Axie Infinity game launcher hub, Ronin Wallet, which allows you to store Crypto and NFT from the Axie marketplace. So in this brief but extensive guide, we'll be showing you some of the game's very interesting features and gameplay elements that should get you up to speed in no time if you're starting out.

What is Axies Infinity

Axie Infinity is a game that allows you to breed and grow a bunch of cute creatures called Axies. Before you start the game or before you get an Axie, you'd have to purchase them using NFTs via the game's marketplace, as we've previously stated in our beginner's guide.

The developers of this game also created a whole new cryptocurrency transaction platform called Ronin, where most Axie Infinity-related transactions occur. It's a very fast, smooth, customized sidechain created to give the game's players a sort of private transaction portal with lesser charges than the actual EthereumBlockchain.

Unlike other turn-based games on both PC and mobile, Axie Infinity is unique due to its Play-to-earn element, as very few games offer this to players. In Axie Infinity, you can sell a lot of stuff that ranges from Axies, lands, or even certain accessories that range from flowers to barrels. All this is done through Ronin, the game's official NFT marketplace, where most transactions occur.

Players can use two types of coins in this game: Smooth Love Potion, SLP, and Axie Infinity Shards, AXS. These tokens are used in the game's transactions, interactions, processing purchases from acquiring land, selling an Axie, etc. Both Axies and their eggs can be sold to other players in exchange for ETH as its main currency for trade. Axies are these cute and fascinating-looking creatures or monsters that you can battle, purchase or care for and decide to sell for real money at some point. A unique thing about them is that each Axie has a unique characteristic that sets it apart from the rest, which is influenced in almost every battle.

Each of the Axies presented in this game possesses up to four states that are Morale, Skill, Health, and Speed. You must know your Axies well by knowing how good they are from their stats. And you can also know if an Axie is good enough to be deployed into arena battles or not. So below are brief elaborations on the four stats:

Health: This is the total and overall maximum amount of damage your Axies can take before they are knocked out of a battle.

Morale: This is what improves your chances of hitting an opponent with a critical strike. Additionally, morale increases the chances of getting into the final stand.

Skill: If you're playing various cards simultaneously with an Axie, their skill will increase the overall damage and initiate a combo.

Speed: Your speed determines your turn order level and Axies with more speed tend to throw the first punch. However, speed can decrease an Axie's chances of receiving a critical hit. So, since you've understood what Axies is, let's get into a feature that you should expect from every turn-based game – class.

Axie Infinity uses a class trait system that discloses the advantage of one Axie over another by class. So far, the game has introduced players to 9 Axies in total: Aquatic, Beast, Bird, Bug, Dawn, Dusk, Mech, Plant, Reptile.

Amongst all of these types of Axies, three special classes can only be bred by using special Axie combinations if you're a fan of breeding. For instance, Mech is an offspring of Beast and Bug. Dawn, on the other hand, comes off as an offspring of Plant and Bird. And lastly, we have Dusk, who are born from Reptile Axies. 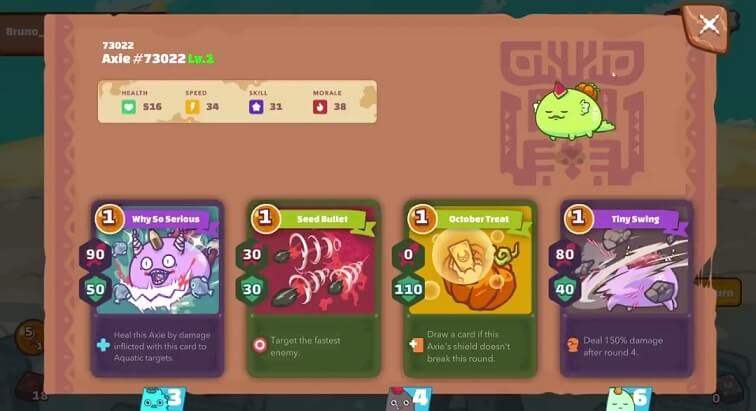 It is also worth noting that every Axie has six different body parts: mouth, horn, ears, back, tail, and eyes. The mouth, tail, back, and horn handle Axie's skill cards. Also, everybody part does well in contributing to the various states of an Axie depending on the Axie class. Below are some additional attributes from the Axies: Best Teams in the Game

Whether you're playing PvP or PvE, these modes are different from the game's adventure mode. Because in former, you are set to go head to head against other teams of Axies owned by another real player like yourself. But in adventure mode, you'll be going up against AI-controlled bots with various levels of increased difficulty.

So regardless of the mode, you're playing, here are some of the best and balanced Axie team up that you should either do yourself or watch out for players that have them: If you can, always team up with the above Axies, and if you're unable to do that, they always keep an eye out for players that's do. If you have a lineup such as this, then it wouldn't be a big deal to compete in the game's PvP or PvE matches, as you'll be quite the contender yourself.