The game is made so that almost every team can get through most of it, but there are some team-building rules and basics that can help you improve your party's performance by a significant amount!

But you will not need to worry about these issues as this guide will assist you in making the most optimal and fun teams in Marvel Future Revolution.

Before jumping right in, it is crucial to know how a character generally wants to operate. One should know the pros and cons of having a certain hero in a team comp. Not only does it make identifying the strong and weak points of your team much easier, but it also helps in making the perfect counter for a specific situation. The main carry is a type of character that can constantly apply vast amounts of damage. They will be the ones controlling most of your team's damage output. This, however, means that main carries would have to be in combat much more constantly than other dash-based characters to deal optimal amounts of damage between cooldowns and such.

Main carriers are either the ones that have skills that can burst on very short cooldowns or skills that scale well for massive damage outputs. This starts becoming apparent the later you reach the game and start optimizing your hero.

Now the ideal things to look for in these kinds of carries are the optimal bonus stats for basic and area of effect attacks. These bonus stats scale as you level up your character and start having a significant impact on the game state. It will make you realize how effectively the skills and combos are being utilized.

Currently, the best type of hero for this kind of damage in the game is a storm. Although not as mobile as other characters, the damage per second she puts forth in Blitz is straight-up insane. However, her cast times are long as well therefore, she needs someone to protect her or, in gaming terms, 'peel' for her. A support character is the one whose main job is to provide debuffs or other forms of crowd control for your team. They will be the ones that cover up the flaws in your gameplay execution by slowing/knocking back the enemy to give you time to cast your abilities effectively.

While crowd control in earlier stages of the game does not feel as valuable or, at most of the time, plain useless. But as you approach the late game, you will realize how crucial support is for a team to deal with stronger bosses successfully. Ideal supports will have bonus stacks applied with their abilities that are focused on slowing down enemies' movements, break their guard or knock them, etc.

Right now, the prime candidates for this kind of playstyle are Spider-Man and Star-Lord in which, Spiderman is the stronger candidate with his cocoon ability and tons of slows he puts forth. As for Star-Lord, he is someone that has an insane amount of debuff potential. However, his debuffs do not last long enough to be considered a stronger pick than Spider-Man. A Tank or Bruiser is someone who has a lot of defense-based abilities in his kit. A tanker's main job is to face the brunt of the enemy's offense so that his team can focus on dealing damage and debuffs.

Just like supports, tankers are hard to level up because of their lack of offensive capabilities. However, the level-up path of a tanker is gratifying. The closer you approach the late game, the stronger your hero becomes. Tankers are designed to have offensive capabilities that scale from their defense. This gives them the capability of bruising the enemies. So, it is not like tankers are inherently unable to deal damage at all. In rare cases, tankers are the ones dealing and taking the most damage in their teams.

Captain America is an excellent tanker in Marvel Future Revolution who can deflect the enemy's damage and make targets focus fire on him in Late Game. Since he is building a defense, it is his job to tank the DPS of the boss. An assassin is usually a highly mobile single target damage per the second kind of character. His abilities revolve around dealing massive chunks of damage to a single target.

Assassins are specialized to one-shot anyone not building a defense. This kind of damage is called "Burst Damage." The basic playstyle of an assassin is to dump all of their skills in one go which generally leaves the enemy dead or in an incapacitated state. The assassin can then gain distance using his mobility and strike again as soon as his resources A.K.A cooldown is refreshed.

Black widow is one of the strongest assassin types in the game. Her kit is ideal for dealing massive chunks of damage to single targets. Therefore, she is also a very good option to pick for boss battles.

You can also look at our other guides about Marvel Future Revolution to get an idea about all the characters in the game! 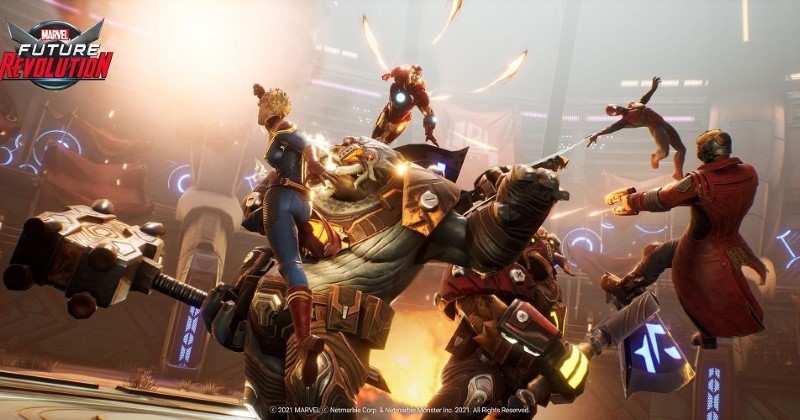 In Blitz mode, teams of 4 heroes get to fight against a single boss from the Marvel universe. Every team is composed of 4 characters in which every hero is fulfilling a certain role to balance out their team's weak points. For example, your team might have a lot of crowd control, but it does not have someone that can constantly deal high amounts of damage. It can even be that your team is missing out on a crucial debuffer which is continuously causing your missions to fail. Looking out for these minor things before fighting the boss is a vital quality of a good gamer.

This kind of team is best suited to zero to one the boss as soon as possible. The main pros of this comparison are that it can speed run most of the bosses. Storm providing massive Area of Effect damage paired with the Black widow is already a deadly enough combo. Pairing that with an all-rounder-like iron man who can call his little drones to fight for him can cause even the tankiest bosses to start melting. Captain Marvel does an excellent job of tanking the boss's attacks and repositioning according to situations.

The only con is that the longer the fight drags on, the more disadvantageous your position becomes since no one here effectively sustains damage for more extended periods of time. Therefore, this comp is most suited in grinding for levels.

This is one of the most balanced team comps that effectively use strategy and skills to defeat high-ranking bosses. Storm and Black widow are effective DPS dealers. The spider man provides crucial support in the form of knock-ups and downs, slowing and debuffing the enemy, as well as being able to break their guard effectively. While all of that is going on, Captain America can tank and deflect the incoming damage from the boss, and when he needs to refresh his cooldowns, the Black widow can draw aggro with the help of her mobility.

This team be used at almost any rank and does an excellent job of balancing everything.

This team is perfect for dealing with bosses that can be kited. That means that you can successfully dish out damage while dodging the boss's attacks. These kinds of bosses either have slow attack animations or have very readable skill trajectories.

This comp is very skill reliant as the damage per second of the bosses are no joke and can effectively render you useless after one or two successful hits. However, it is an enjoyable and rewarding way to play the game while improving your mechanics and strategy.

This comp is designed to maximize the protection of the main damage dealers. This comp enables Storm to be the star of the show, with two meat shields and a CC machine. A storm is relatively very safe and does not need to worry about her positioning that much.

This style of gameplay is more suited towards newbies that want to try a safer kind of approach. But, if the storm dies/gets taken down mid-fight, then the lack of a secondary damage carry will make Boss missions almost unwinnable. Next up, we have Special Operations mode. This mode is also for a four-player team and focuses more on the experience of being a hero. In other words, you get to play the hero while saving people on diverse and fun missions with your squad.

The thing that matters the most here is mobility, to be able to chase enemies and knock them down using a barrage of different moves. Long-range firepower and agility are the bread and butter in this mode. So, without further wait, let us look at some of the most effective team comps to run in the Special Operations mode of MFR.

This team comp is specifically designed for long-range, fast-paced combat. The Special Operations mode gives you much more strategic freedom and choices. Therefore, having mechanical diversity is essential. This team comp does an excellent job of harmonizing different champion synergies to work as a smooth unit.

The fast-paced and single target D.P.s of Black widow make her good for dealing damage. While Doctor Strange and iron man takes care of all the AOE damage. Spider-man is a good addition to have as he can provide slows and stuns on essential enemies.

This team provides different forms of an area of effect damage to defend and suppress hoards of enemies. The main strength of this complies with multiple enemies but has sufficient firepower to fight against single bosses as well.

Captain America can attract and tank enemies while a storm casts a large area spell. Iron man can summon bots and lasers while flying through the perimeter for recon. Doctor strange also substitutes for a great multi-target damage dealer. However, doing so means that the comp lacks versatility and flexibility. Your only way is to overpower the enemies, which can be boring at times.

What Makes LDPlayer a Better Platform for Marvels Future Revolution:

Marvel Future Revolution is a quick-gameplay-based MMORPG which means that there is a lot of button-mashing to do. This experience can sometimes feel tough and messy to execute on a small screen, and for that, LDPlayer lets its users set macros. The seamless key mapping feature of LDPlayer also allows for easy movement in-game and provides an effortless skill casting experience.

The squad system that Marvel Future Revolution has introduced will allow players to experience different styles of plays at different levels. Luckily, the game is easy enough that even if you decide to go off-meta and try to make non-ideal teamwork, it will still not punish you hard.
This might change with time as more and more people join the game and different modes are added. MFR has been and will be adding depth to the game such that every character's ability looks pretty relevant and serves a definitive purpose.

Nier Reincarnation | How to Raise the Player's Level