These days the most popular Genre of mobile games is Battle Royale, which is supplemented by the fact that PUBG is so popular these days. You and your friends can play together anywhere, online from the comfort of your homes or during a meetup. The most recent entry to this already saturated genre is none other than Square Enix's Final Fantasy VII: The first Soldier from the Final Fantasy series and, more specifically, the 7th iterations remake recently done for PS systems. The game is still under development and recently closed its beta period. The beta started on June 1st and finished on June 7th. After the closed beta, the game will go back to development after learning a lot from this closed beta to improve upon what they learned. Square Enix in the beta offered many things during the closed beta and present in this patch, while more are slating to add later. At least, gameplay elements were mostly present.

Another important trait that seeps in this Battle Royale from the Final Fantasy franchise, other than spells and abilities, is the jobs, normally classes in other games.

In Final Fantasy VII: The First Soldier, classes are known as Styles. You can choose from 4 of these styles depending on your preference. These styles are known as ranger, warrior, monk, and sorcerer, where each of them has its traits and weapons for melee combat. Each class starts with one of these unique weapons. For example, the ranger holds daggers as his/her starting weapon, while the warrior swings his sword, the sorceress stomps his staff, and the monk flaunts his fists. You can try out each of these Style classes in different matches before choosing one you are most comfortable with and start playing. Based on these Styles, Final Fantasy VII: First Soldier breathes fresh new air in this Genre.

The spells mechanic in this game is associated with orbs that fall on the ground when you do certain activities. These activities include killing other players or killing monsters etc. You can pick these orbs up to increase your spells' level, which can also increase the damage and reduce the MP cost.

Each class gets its special skills or abilities to use on the battlefield. For example, warrior gets Rush from Fearless Charge trait and Siphon Slash skill while sorceress gets Magic Boost trait, Arcane Field ability and Concentration skill. A monk gets an Inner Strength trait, Manawall ability, and Revitalize skill. Finally, the ranger gets Mark trait, Assess ability, and Sniper Eye skill.

Other than class-specific spells, every candidate can use a few regular abilities such as Cure, Protect and Summon Materia. You can use Summon Materia ability to bring forth allies to fight alongside you, and Cure heals you and can also heal allies. In contrast, Protect ability provides a shield to defend from enemy attacks. Another common spell is Aero, a wind gust that you can use to reach higher places in the game.

Battle Royals thrive on competition and cosmetics. People love to buy skins of their favorite franchise in the games, and this has become a global phenomenon and a big source of revenue for many companies who venture into Battle Royal Genre. For example, in Final Fantasy VII: First Soldier, you can access character customization from the barracks, where you also see options about weapons and vehicles. 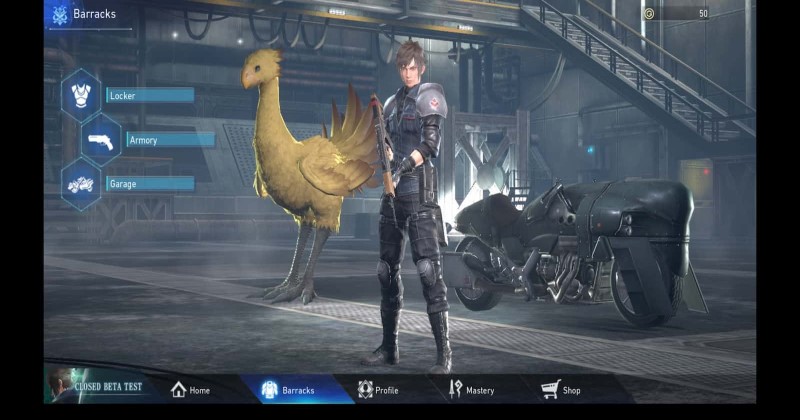 When you are playing on mobile, the game needs to offer you bite-sized chunks of playtime so you can withdraw at any time and other chores of daily life aren’t affected. A regular match lasts 15-20 minutes, making it easy to play a single match when you are relieved of other work.

In Final Fantasy VII: First Soldier, there are a plethora of monsters in Midgar. Most of these monsters are minions who don't pose any threat and can die easily to gain XP and complete objectives. Dragon and Sentient fireball, on the other hand, are not walkovers their fire breath and huge fireballs can easily one-shot most experienced players. Therefore, we recommend you don't come in their line of sight alone.

You start the game with level 1 like every other player who has jumped into Midgar. The more enemies you kill, the more XP you gain. Enemies include both monsters out in the wild as well as other players. Leveling up makes you stronger by giving you mana slots to cast more abilities and incentivizes players to go out more, not just look for players. The faster you level up, the more your chances of the last man standing.

One of the most important traits of Final Fantasy VII: First Soldier's are the elements it brings in from its PS franchise, skills and abilities, to be precise. As the Final Fantasy franchise is mainly known as an RGP, skills and abilities are a core mechanic, and this shows in the Battle Royale version. Abilities are one aspect you may need to practice a lot to be familiar with if you come from other Battle Royals. Therefore, you need to practice a lot to get good at it.

The beta offered most items like weapons, costumes, vehicles, and much more and surely add more when the game launches. However, they haven't released a premium currency yet as most things were buyable by in-game currency Gil. Gil is earned by playing the game regularly and participate in matches; the more you win, the more Gil you'll accumulate. You can also earn Gil from killing monsters and completing other objectives in the game. Some objectives become visible in every match. These begin at the start of the game, which you must complete within a certain time. One example is to kill Soldier candidates, other real players in the game within 2 minutes. The objective goes away if you are unsuccessful and can attempt it again in the next match.

The battle pass is a player incentive and engagement tool that encourages a player to log in regularly for the game's rewards. Sometimes, a paid battle pass is surely available for more rewards.

Like any other game and battle passes, every game gives you many objectives to progress towards and earn rewards to have more fun. A few of the most common and regular objectives listed below are present in the Final Fantasy VII: First Soldier.

Most mobile games are either AFK or auto-battlers, while some games give you different auto options to choose from, and the same is with Final Fantasy VII: First Soldier. The game allows you to auto-open doors, pick up ammo and supplies and even shoot enemies if you keep your crosshairs on them. A few of the times, you may get lucky if the enemy is behind walls, and you get a free kill.

While most games drop you from an airplane, Final Fantasy VII: The first Soldier does the same if you’re playing solo. But if you’re playing with a squad, you get 1 minute to get your bearing straight and hop into your chopper. In this limited time, you have to take the chopper off and land it somewhere safe. Use your chopper wisely.

Square Enix has proudly said that each Battle Royale match can accommodate 75 players together in one match, which is a huge number for a mobile game's standard.

Most of the Battle Royals don't include vehicles in the repertoire, and even if some of them include it, it’s not as readily available. However, most battlefield games on PC have that option, and vehicles are a core part of the gameplay. In Final Fantasy VII: The first Soldier, you do so by using Chocobos, a tropical animal and steady piece of transport in the Final Fantasy franchise. Even though the game gives you the option to do your commute on a buggy, enthusiasts will still prefer Chocobos. Final Fantasy VII: The First Soldier is a 3rd person Shooter Battle Royal and best played on PC with mouse and keyboard. You can also use macros for in-game ability usage as this Battle Royal gives the players edge over each other depending on the class Style they have and skills you can use at appropriate times. Finally, a shooting game isn't fun and competitive without higher FPS settings which can you can enhance further by tweaking your GPU to make it run smooth as butter.

Final Fantasy VII: The first Soldier is the latest Battle Royal which pits 75 players against each other on the battlefield all at the same time, which is quite a large number of players. Such a large number means there will be a danger at every corner, and you need to be on your toes. If you are not careful, you may die quickly. On top of that, this game includes skills and abilities to make the Battle Royale frenzy exciting. The skills and abilities aspect is easy to have fun with but difficult to master as they require much practice and attention.

But before you practice, again and again, good information basics are necessary for this game, which we have provided you in this guide. Don't forget to have fun and happy hunting, Soldiers!